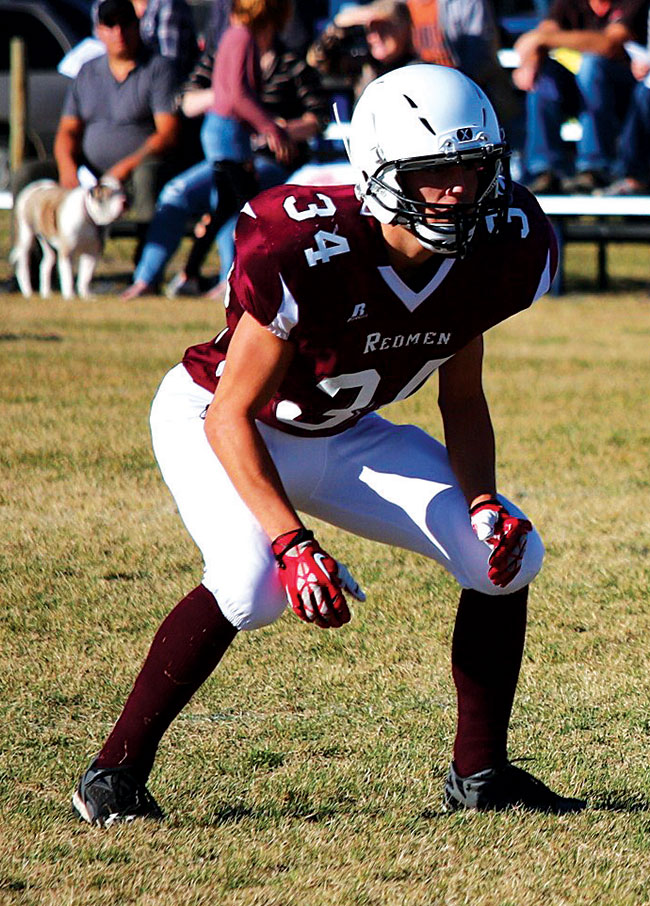 Evan Chabot began playing with the Redmen in Grade 8. Now that he's nearing the end of Grade 12, the Senior Bowl is a chance for him to take part in one last football game. "I love football and wanted to get one more game in if I could," the defensive back said. PHOTO DOMINIQUE LIBOIRON

Five members of the Maple Creek Redmen football team were selected to play in the Senior Bowl. Their selection came following try-outs held in Regina April 22-23. The Senior Bowl takes place May long weekend at SMF Field in Saskatoon.

The Redmen who made the team are Evan Chabot, Keegan Delorme, Justice Smith, Hayden Briggs and Brett Pridmore.

An annual tradition stretching back 33 years, the Senior Bowl is an entire long weekend of football. The best players from southern Saskatchewan form an all-star team to play against the all-stars from northern Saskatchewan.

There will be three games played in total: one for six-man teams, another for nine-man squads as well as one for 12-man teams. The five Redmen will be part of the nine-man game.

Dale Udal said that in his 15 years as Redmen head coach he’s never had five of his players selected for the Senior Bowl at one time. “As a coach, I’m really proud of those boys,” he shared.

Udal explained the Senior Bowl allows players to showcase their skill to junior and university scouts who will be in attendance. For other players, the bowl gives Grade 12 students the chance to place one last game before finishing school.

He said each player brings their own skills and strengths to the field. Chabot, a defensive back, is a gritty player, Udal explained, who isn’t afraid to play a physical style. As a linebacker, Delorme is talented in many aspects of the game and provides good coverage while Smith, who plays the same position, is aggressive and doesn’t shy away from contact.

Udal doubts there are many football players in the province who can run as fast as Briggs, which makes him well-suited as a running back. Coach Udal described Pridmore as a “big, strong country boy” whose natural strength helps him on the offensive line or when riding bulls in his spare time.

Udal has been part of the coaching staff of the Senior Bowl three times.

Chabot began playing with the Redmen in Grade 8 as a way to get into shape for hockey, but since then he’s developed a deep interest in the sport. Now that he’s nearing the end of Grade 12, the Senior Bowl is a chance for him to take part in one last contest. “I love football and wanted to get one more game in if I could,” the defensive back said.

Chabot explained that in order to be selected for the Senior Bowl, he and his teammates had to attend a combine held in Moose Jaw before going to the try-outs in Regina during the fourth weekend in April.

Cody Halseth is the performance director of Football Saskatchewan. He explained the Senior Bowl was originally slated to take place at Mosaic Stadium, but scheduling conflicts forced the bowl to move to Saskatoon.

Halseth said the athletes will arrive May 19. They will practice with their respective team from the 19th to the 21st. The three games will all be played May 22 with the kickoffs at 10 a.m., 1 p.m. and 4 p.m. Due to the change in venue, Halseth said the schedule hasn’t been finalized, but to date the Redmen will be playing in the 1 p.m. game.

Apart from the Redmen, other Southwest teams eligible to play for southern Saskatchewan include the Gull Lake Lions, Shaunavon Shadows and the Swift Current Colts.

Team South also draws from cities such as Moose Jaw, Regina and Estevan while the northern team selects players from Saskatoon, North Battleford and Prince Albert along with surrounding towns.