Mohawks get ready for season 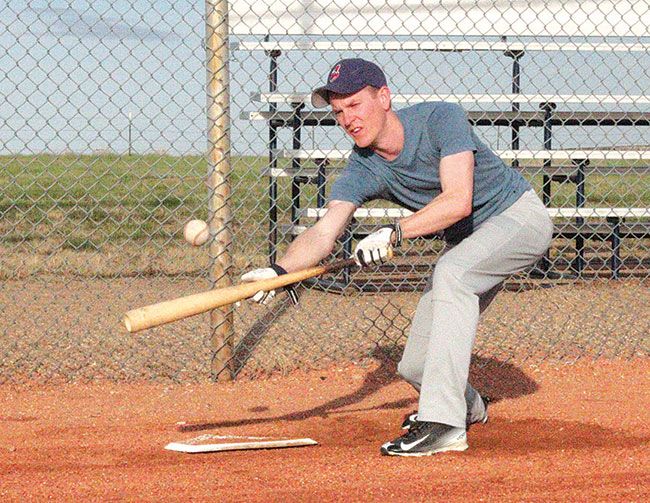 Outfielder Graham Gordon gets ready for the upcoming Maple Creek Mohawks season with a bit of bunting and hitting practice at the baseball diamond north of the train tracks May 3. SPORTS PHOTOS SEAN MCINTOSH

The Maple Creek Mohawks are getting set for the 2017 Sask-Alta Baseball League season.

Last year the Mohawks finished with a 5-8 record. Coach Al Fournier  says he expects the team will improve this year.

“We should be competitive,” Fournier said.

One of the biggest improvements for the team will be its pitching, as they will add a couple pitchers.

“You can never have enough arms,” Fournier said. “We’ll be deeper with our pitching, which is huge. We had to lean on a couple guys last year … That should help a lot.”

Fournier says the league is almost a three-tier league with four or five teams at the top, such as last year’s champion Swift Current Yard Goats, a few teams in the middle and then a few teams stuck at the bottom.

“I think right now we fit in the middle, but hopefully we can get better as the year goes on,” Fournier said

Members of the team have already started gathering to get ready for the season by hitting and tossing a few balls around.

The whole team hasn’t gotten together yet however, as a few players – Blake Fournier, Craig Fournier and Dalton Kaake – have yet to return from University in the United States. Those three are expected back May 10 or 11.

Additionally a few team members live out of town, with a couple players living in Medicine Hat and  another in Kindersley.

“There might be a few things to adjust in the first week or two, but that’s just the nature of the beast when it starts and it’s a short season. You go with what you have,” said Fournier.

Outfielder Graham Gordon says despite the whole team not practicing, he feels the team will be more prepared than they were at start of last year.

“I’m looking forward to another season,” Gordon said. “We’re already way ahead of schedule compared to last year. It’s good to get out here, especially when the weather is nice.”

Another outfielder on the team, Blake Sanderson, shared Gordon’s excitement for the upcoming season.

The Mohawks got off to a hot start last season, winning its first three games. Sanderson says he hopes to see that happen again.

“We hope to win as many games as we can this year and get off to a good start. If we win a few games early we can hopefully stay on par with the top teams,” he said.

After winning the first three games of the season, Maple Creek won just two of its last 10 games.

The team will need to cleanup the errors in its play to be more successful, Fournier said.

“There will be errors, but if we can limit it to three or four a game instead of seven or eight that would be good.”

Getting on base and not stranding anyone there is also key to a more successful season.

“We need to work on moving our hitters and capitalizing on our opportunities. I’m not sure how we’ll be hitting wise, as hitting is one of the hardest things to do,” Fournier said.

All 10 teams in the Sask-Alta Baseball League will make the playoffs this season, with the fourth and fifth seeds in each division to battle in wildcard games.