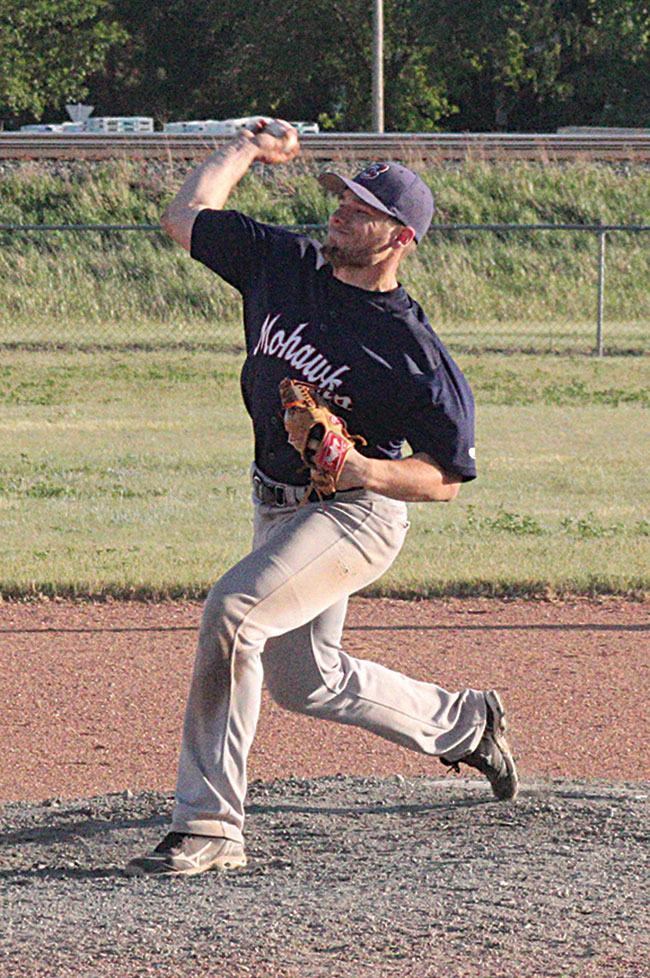 Dalton Kaake recorded eight strikeouts in five innings of pitching during the Mohawks' game against the Medicine Hat Vipers May 29 at home. SPORTS PHOTO SEAN MCINTOSH

Another game, another win for the Maple Creek Mohawks.

The Sask-Alta Baseball League team remained undefeated this season following a 14-2 win over the Medicine Hat Vipers at home May 29.

The win improved Maple Creek’s record to 4-0, which puts them atop the West Division and second only to the Swift Current Yard Goats in the 10-team league.

Maple Creek was able to bat home a few runs in the first couple innings, but coach Al Fournier says the team looked a little sloppy early on.

“We’re definitely the stronger team and it just took us a while to get going,” Fournier said. “When you’re playing a weaker team sometimes you’re not as prepared and I think that was what happened.”

The Vipers are currently last in the league with a record of 0-5.

Heading into the bottom of the fifth inning, Maple Creek led the Vipers 5-2. The Mohawks then exploded offensively with seven runs in the fifth and two in the sixth.

We kind of blew it open in the last two innings,” Fournier said.

Despite coming out of the game with a win, the team will need to find better a start in order to continue the success its found so far this season, Fournier said.

“We weren’t as sharp as we should’ve been, especially defensively and with a couple key at bats.”

“I dont think we were ever in trouble because Dalton Kaake pitched a very good game.”

In addition to Kaake pitching an excellent game, he went three for three at bat with two walks. He scored two runs in the game as well.

The Vipers called the game at the end of the sixth inning, giving the Mohawks a 14-2 win.

The Mohawks are in action Thurs., June 1 in Richmound, where they’ll take on the Rockets. Richmound has two wins and two losses on the season, but is coming of consecutive victories.

Fournier says it’ll be a tough battle in the Rockets’ barn.

“They got a veteran squad and we’ll have to be ready. We’re going to need to be sharp defensively and get a couple key hits.”

Maple Creek’s next home game is June 5, when they host the 3-1 Burstall Braves. The Mohawks won the previous matchup between the two teams this season 7-0.

“I’m sure they weren’t real happy how the game went down on their turf last week, so I’m not expecting an easier game, that’s for sure.”

The games against Burstall and Richmound are two big ones, Fournier said, because these are teams the Mohawks will be fighting against to win the division.

“These games will help us find out a little more about ourselves. I believe we match up well, but hopefully we’ll be able to get some wins.”

The first pitch for the home game against Burstall will be thrown at 6:45 p.m. at the diamond across the train tracks.