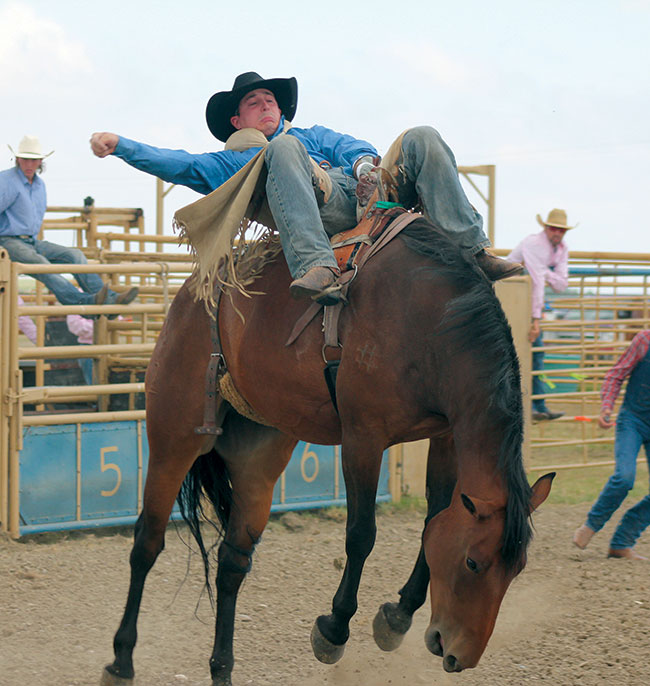 Brady Bertram will be one of the many locals competing at the upcoming CCA Rodeo in Maple Creek June 24-25. FILE PHOTO

A few competitors from the area are getting ready for the upcoming CCA Rodeo.

The Maple Creek Ag Society will be hosting the rodeo at the rodeo grounds in town June 24 and 25.

Being able to compete in a rodeo in front of his friends and family is something he’s pretty excited for, he said.

“There’s a number of CCA rodeos within an hour or two of town, so my family likes to travel to those, but being home is a good deal,” Bertram said.

“I’m looking to get to finals as high in the standings as I can and win my third CCA Finals,” he said.

Brady Bertram’s brother, Casey Bertram, will be competing at the CCA Rodeo as well.

Casey Bertram is currently sitting second in the saddle bronc with 140 points and is hoping to make some ground on the top spot (150 points).

“I had a couple issues at the beginning. I broke a saddle and started with a new one and kind of drew some bad horses, but it’s turned around now and things are going good,” said Casey Bertram.

After finishing second at finals a couple times, Bertram says he’d like to finish first this season.

Casey Bertram, a Piapot resident, says he’s excited for the CCA Rodeo to be right next door. Being able to have a rodeo so close is definitely an advantage, Casey Bertram said.

“It’ll be good to compete in front of family and friends, as well as my hometown,” Wilson said.

The 15-year-old will be competing in the junior barrel. Last year she was the season leader by over $3,000. It’s been a decent start to the season this year, but she has some more work to do, she said.

Like the other locals, Tanner Jones says he’s looking forward to competing in front of those he knows.

“It’s awesome to compete in front of your hometown. If there are family and friends who can’t watch you  in another town, they can drive two minutes to come watch you and hang out with you here. It’s great,” Jones said.

It isn’t just the rodeo competitors that will be happy there’s a rodeo in town, he added.

“I think it’s great for the town,” Jones said. “I think the businesses with do good and benefit from it.”

So far this year Jones is the No. 3 TR Heeler in the CCA. It’s a good start, but he wants to keep improving, he said.

“Everything has its ups and downs, but you just got to battle through it, keep your head held high and keep going.”

Other locals competing in the CCA Rodeo on June 24-25 are Sydney Windjack, who will compete in the junior barrel, past CCA qualifier Tyler Gilchrist, Adam Gilchrist, 2016 CCA All Around Champion and saddle bronc finals champion, and Maple Creek’s Mike Gordon, currently eighth in saddle bronc.

The rodeo starts at 4 p.m. on Sat., June 24 and at 2 p.m. the following day. The bucking horse futurity is on Saturday as well, starting at noon.

Admission for the rodeo is $10 each day, $5 for children between six and 12, and free for anyone five and younger.