Maple Creek junior girls barrel racers swept the board at the 2017 Canadian Cowboy Association Finals Rodeo. The opening day the junior girls saw Maple Creek’s Logan Resch set the pace with the opening run, completing the cloverleaf pattern in 12.72 seconds. Janae Wilson also put up an impressive time with a 12.76-second run to finish in second place by just .04 of a second. Sydney Windjack turned in a 12.87-second run to take third, and Cassidy Gordon took fourth place in a time of 13.50 seconds.
Resch who entered the CCA Finals as the top-ranked junior barrel was pleased to see so many Maple Creek girls in the top four rank in just the first day of competition.
“It was very exciting to see all of us in the top four; this was something that happened last year as well, so it was great to see,” she said.
The final day of competition saw Windjack make the best time of 12.87 to add to her aggregate time of 64.28, giving her the victory. Windjack took third place the first round but didn’t let that get to her as she knew there was a long way to go.
“I didn’t let that first round bother me,” she said. “I was happy that Logan won it and Janae got second with four Maple Creek girls being in that top four, it was a pretty close race with all of us. I didn’t think too much about the competition, though it was in the back of my mind, I was just focusing on having five clean runs and finished where I finished.”
At last years competition Windjack did a run-off for the championship and lost, tipping two barrels, something she focused hard on not repeating this year.
“This year I said to myself if that ever happens again I just needed to go outside and re-do everything, make it as if I hadn’t run yet, and just prepare myself mentally again,” she said.
The top three finished with Windjack in the first place, Logan Resch in second with an aggregate time of 69.67, and Janae Wilson in third with an aggregate time of 64.55. Cassidy Gordan finished in the fifth spot with a time of 66.27. 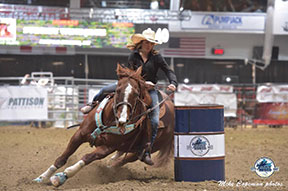 PHOTO MIKE COPEMAN
Sydney Windjack guides her horse around the barrels at the CCA Rodeo Finals where she claimed victory for her impressive runs.