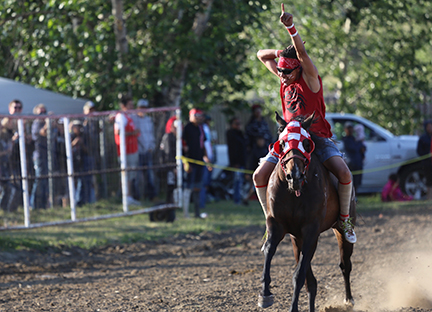 At times the chilly evening winds did swirl and gust, bending branches, ruffling leaves, tossing litter and threatening to dislodge hats and caps. There was even talk, initially, of a possible tornado.

A few seconds into the Indian Relay Racing, however, and the talk turned to the storm of activity in the middle of the High Chaparral Arena – and the whirl of hooves on turf.

Thirteen teams from all over Saskatchewan and Alberta competed in a blaze of colour. Four riders, known as warriors, would complete one lap of the grounds, before sliding off their moving horse and jumping on a fresh one. There were two exchanges and three laps.

One moment man and horse were setting off from boxes before the packed grandstand, the next they could only be seen intermittently on the outskirts of the arena, occasionally vanishing from view. Cup your ears, and you may have heard the faint sound of pounding hooves.

There would be a collective intake of breath as the horses rounded a bend and suddenly reappeared, hurtling back into the main arena to a burst of cheering and clapping.

It was during the dismounting and mounting that races were often decided in a frantic flurry of activity. It was the equivalent of a Formula 1 pitstop for a change of tires.

Vital seconds could be lost through an awkward mount or if a horse proved uncooperative. One team’s hopes of winning were ended when a thoroughbred bolted free of its handler and galloped riderless around the track. The faces of anger and dejection showed that this was not mere spectacle; it was serious competition.

The teams consisted of four members: a warrior, mugger, holder and back holder.

In the end it was a team in predominantly red, Stone Stables, from Mosquito First Nation, Saskatchewan, that wore the broadest smiles after being declared 2019 Maple Creek Saskatchewan Indian Relay Racing Champions. Team members were presented with black championship jackets.

More than 1,200 people had filled the arena for Thursday evening’s “Showdown in Cowtown” (sponsored by SIGA), a doubleheader of relay racing and bull riding, interspersed with Indigenous dancing introduced by Dale Mosquito, a councillor from the Nekaneet reserve. Young and not-so-young dancers illuminated the venue with their movements and regalia against a musical backdrop provided by a drumming group. Performances included a grass dance and healing dance.

Meanwhile, Kookum’s Kitchen saw a lot of action throughout the evening, and after the bull riding ended under floodlights, people drifted towards the beer gardens to enjoy a concert by award-winning country singer Trevor Panczak.

It was the second year that Maple Creek has hosted Indian Relay Racing, making for a fabulous celebration of the community’s First Nations and cowboys history.

“What an amazing array of talent,” said Braniff.

One of the new features this year was a Ladies Race, with the winners receiving leather bracelets created by Tyrone Maines. Dedicated to the missing and murdered Indigenous woman in Canada, the race was added to a portion of the event that included a Warriors Race and Chief Race.

There was also a Little Warriors race that gave youngsters aged 8 to 13 a chance to take the spotlight.

After the Indian racing was over, the crowd was given a chance to catch its breath before the focus switched to the bull riding. Paraguay’s Fabian Dueck took the championship buckle with an 86-point ride on “Dust Off”, for a two from two on the night.

Braniff said the relay racing was a perfect fit for Maple Creek, a community whose history has been based on a working relationship with Indians – a term that Indigenous people here are proud to use.

“The relationship between the Indian people and the settlers has been a great one,” he said. “That’s why the Battle of the Little Big Puck has been what it is. We have a unique relationship.”

He added: “The Nekaneet band here were the last ones to to get their treaty rights because they wanted to stay in the hills and I’m glad that they did.”

Braniff’s comments reflect those on the Nekaneet website, which states that Nekaneet has a long history in the Cypress Hills, their ancestral land.

Chief judge Winston Bruised Head, who comes from Stand Off, a community in southern Alberta within the Blood Indians reserve southwest of Lethbridge, said the racing had gone very well.

“It was a really good race meet,” he said. “These guys own all the race horses and train them. The jockeys or warriors train really hard and have to be in tip-top shape to ride around without a saddle.”

“Overall it was very well received,” he said. “The Indian Relay Racing teams did an excellent job. The track has come a long way in a year.”