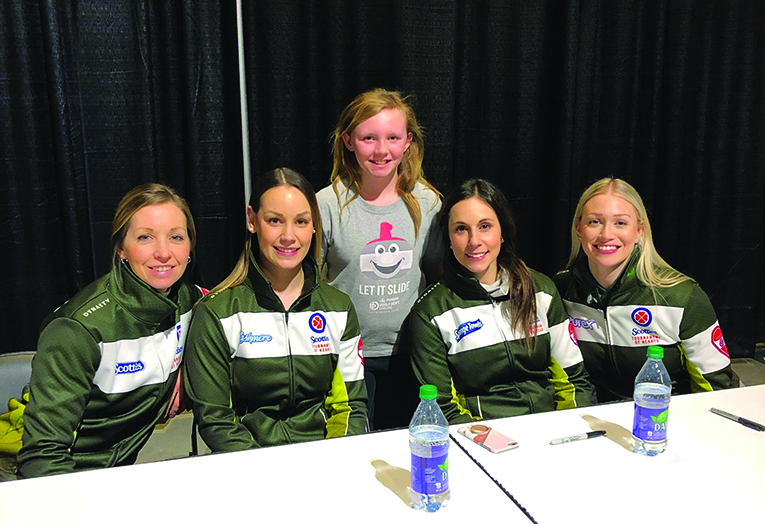 Grace poses for a picture with Team McCarville from Northern Ontario.

The Scotties Tournament of Hearts was one to remember for a young curler from Sceptre. Grace Wickenheiser, 10, had finished top five in Saskatchewan for the Hit, Tap, and Draw Competition back in January, earning a spot to throw rocks at The Scotties this past week. With almost 500 youth entered into that competition, this was a well-earned prize.

Grace, along with her mom and other extended families and friends took in much of the curling tournament, in Moose Jaw. Her week started with the honour of walking onto the ice with Team McCarville, from Northern Ontario, on opening day. She got to stay on the ice while they warmed up and even had a moment reading the ice with the Team Canada Coach.

Grace was given a jacket, got to have her picture taken with the Scotties trophy and then was taken on a tour of Mosaic Place. During her time there, Grace met many of the curlers and said that she was amazed by how nice everyone was.

On the day of the finals, Grace finally got to throw a rock. Jennifer Jones stayed on the ice after her semi-final loss, to welcome each of the young curlers and to shake their hands. Grace made the top 4 out of 6. Her line was spot on and she made family, friends, and community members very proud. Many of Grace’s fans have noted that they believe she’ll be competing in the Scotties herself, one day.