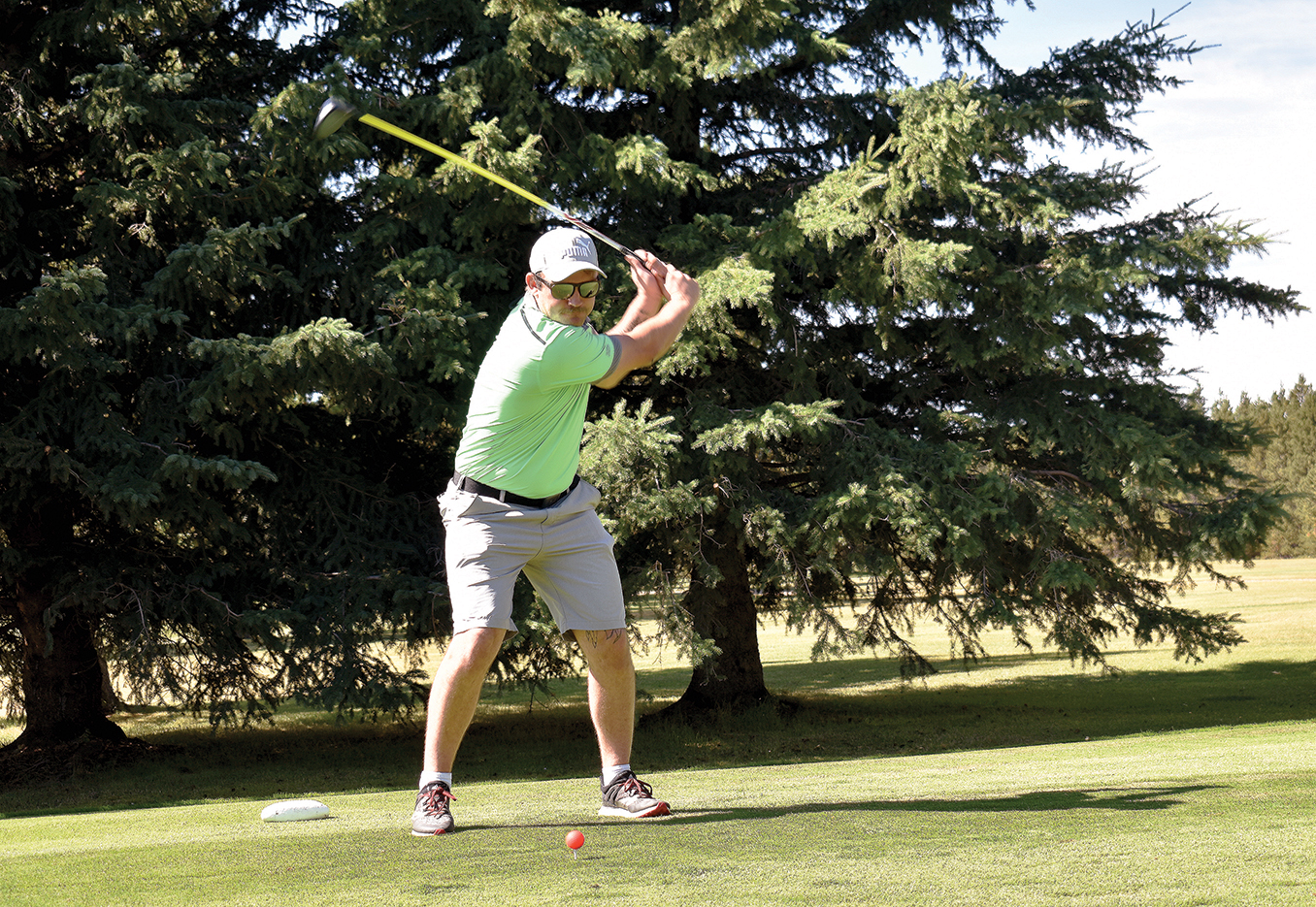 It was a giant family reunion of sorts, one which overcame the threat of cancellation posed by COVID-19.
Saturday saw 52 people descend on Cypress Hills Golf Course with one principal aim in mind ­— to raise funds for Maple Creek Senior Hawks. Among them were present and former Hawks players and coaching staff.
In keeping with such gatherings, the mood was as sunny as the weather, brimming with good humour, wisecracks, and friendly banter.
Although a non-competitive event, fine shotmaking abounded, drawing praise and spontaneous applause, while occasional shanks and slices were met with encouragement. Everyone wanted to do themselves justice.
These were athletes, after all, albeit ones of varying vintage.
This was the fourth edition of the Maple Creek Senior Hawks Best Ball Tournament, which was launched in 2017 and proved an immediate success.
Thirteen teams took part in a four-person scramble, down on last year’s total of 18.
The fee was $100 per person, which included 18 holes of golf, cart rental, and supper, with everything done according to COVID-19 rules.

So as not to interfere with the Maple Creek Swimming Pool fundraising, no prizes were available.
Len Rodin, Senior Hawks manager, was one of those playing golf on Saturday.
“It’s a great day,” he said. “It’s all about having fun.”
The three hockey players behind the event, Lane Sanderson, his brother Blake, and Derek Behrman, were delighted with the show of support. They were hopeful of raising about $1,500.
“People here today have come from Maple Creek, Consul, Medicine Hat, and Swift Current,” said Lane.
“It has been fantastic. Yes, we are down a bit on last year because of COVID, but it’s still a really good turnout. In 2019, the tournament raised about $3,000. If we do half as well this year, we would be happy.”
Lane thanked the Cypress Hills Golf Club for donating a portion of its fees each year.
“We are very appreciative,” he said.
The trio, who played in the same team on Saturday, admitted the subject of cancellation because of COVID-19 had been discussed.
“We talked about it, but decided against since so many people seemed willing to come out and play golf,” said Derek.

“It’s a fun tournament,” added Lane.
“There isn’t a trophy or anything like that. Maybe we should have prizes for the team that has the most fun.”
Asked whether his team had a name, Lane joked, “No, but I guess you could call us The Bomb Squad. That sounds pretty good.”
What about the hockey season ahead?
Lane (left wing), Blake (left wing), and Derek (team captain and centre) say they can’t wait to get back on the ice.
“It’s around this time of year you start getting a bit antsy,” said Blake.
“We are ready. It’s been a long wait, but at the moment we are just in limbo, hoping for a hockey season.”
The understanding is teams can now practice, but not play.
“We are waiting for Saskatchewan Hockey Association to say when we can play,” said Derek.
In the meantime, the Hawks are under orders to maintain fitness levels.
Going to the gym is one way. So is playing 18 holes of golf, which has the double benefit of boosting mental health during a year disrupted by a global pandemic.
Last season, cut short in March by COVID-19, the Senior Hawks were finalists in their group in the White Mud Hockey League, which also featured Cabri Bulldogs, Gull Lake, and Shaunavon.
“We were just two wins away from winning the championship,” said Lane.
The title was awarded to Cabri Bulldogs — but the Hawks have placed a big asterisk against that coronation and can’t wait to go into battle again.