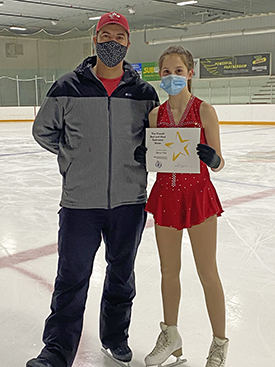 Submitted by Moneec Frey
The Maple Creek Figure Skating Club has missed having our community coming to the rink to watch our skaters skate, during practice and lesson times. But especially having our year end carnival for our skater to showcase what they have learned and achieved this past season.
We had many Covid Protocols to follow from Skate Canada, Sask. Health Authority and even the Community Arena board. Every couple of months we adapted to the changes that we had to face. Our skater went with the flow to get on the ice even if it was different then prior years. But we still had successes with every skater that came out right from our first time skaters to our seasoned skaters.
Our CanSkate Program had a lot of changes, our learning circuits looked different with only patterns to follow on the ice and the props, cones and etc. we normally would use were not used this year. We had to make groups of 8 skaters on the ice and shortened times so we could rotate the skaters in their skating cohort groups. But we had many ribbons and badges received and moving into different levels in the CanSkate program –LEARN TO SKATE. Our Program Assistants, these are 4 of our senior level skaters, which helped out the coach and skaters. We went from all four helping to one, then a rotation schedule was applied.
Our STAR Skate Program as well had many changes and challenges from our skaters, some of these skater normally skate an average of 8 hour a week. They saw changes in less skating time and put into smaller skating cohorts as well. But they were so glad to be on the ice to do something they love.
We had new skaters to this group as well, a couple that moved up from CanSkate, along with our seasoned skaters. These skaters had many assessments on the ice that their coach could evaluate, most were passes and some were just not ready.
We had 2 assessments days for couple skaters who have reached the level that they cannot be assessed by their coach. The first one we had an evaluator from within the province come into the rink to do those assessments.
The last one we had done was a virtual one, boy that was definitely a learning curve with everyone involved, skaters, music and two people videoing live feed to an Evaluator in the province and Skate Canada National office.
We are very thankful to our coach, the parents for helping out and our board members that did many schedules and meetings to go thru all the changes we face.
We so look forward to the fall when we can hit the ice again and wish the skaters that choose to skate thru the summer all the best.