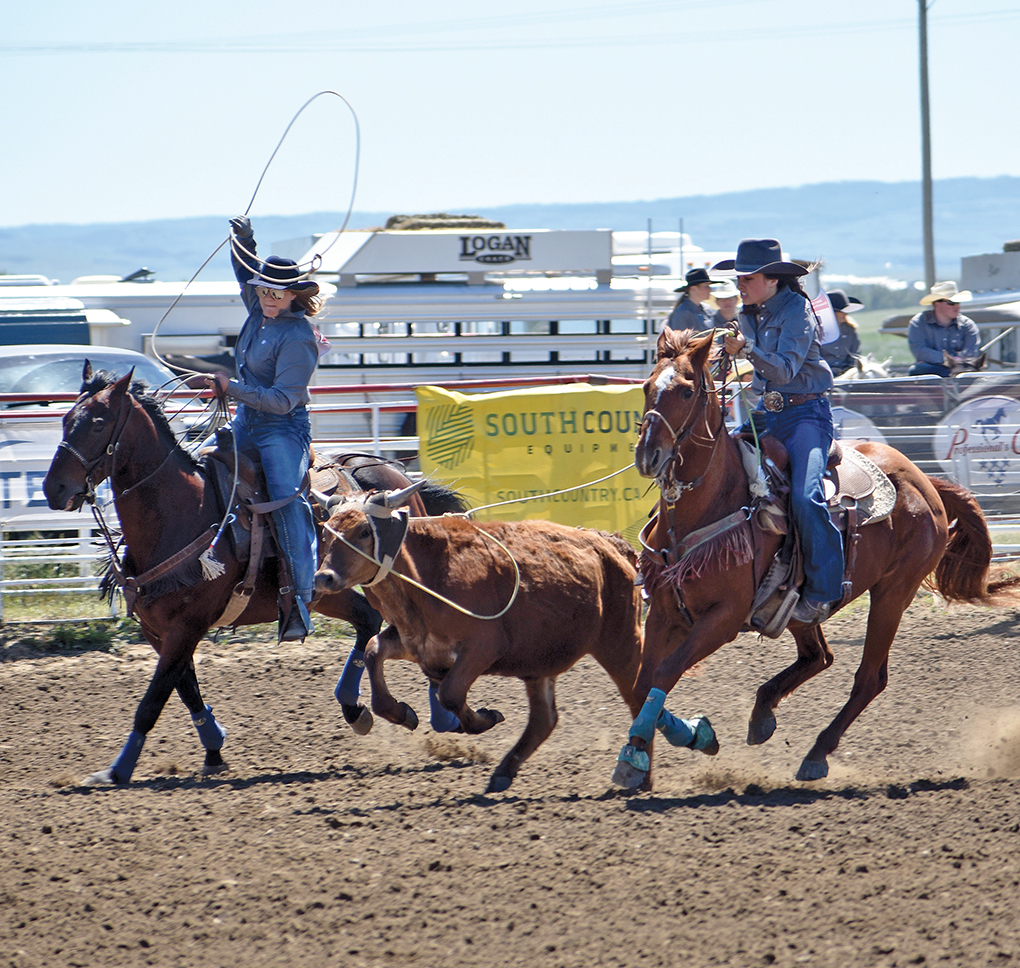 They are eight people who do the work of 800” … “We had a wonderful host committee” … “I’ve never seen such a smoothly run rodeo finals.”
A positive verdict has been delivered on the Saskatchewan High School Rodeo Finals in Maple Creek.
The eight-strong Maple Creek host committee was praised for the organization of the four-day event, the state of the High Chaparral Arena, and the condition of the livestock.
Warren Allin, the announcer, said he had never witnessed such a well-run rodeo finals.
During the closing stages on Sunday, he saluted the “outstanding” host committee and applauded the efforts of the “world-class” pick-up men and ground crew that tended the arena soil.
Afterwards, in an interview with the Maple Creek News, he said of the committee members: “They are eight people who do the work of 800.”
His words were echoed by Clayton Schira, president of the Saskatchewan High School Rodeo Association (SHSRA).
Reflecting on the June 17-21 event, he said: “The finals went well. We had excellent weather, a very competitive rodeo, and a bunch of happy contestants.
“Everything went smoothly. Maple Creek is a wonderful community. We had a wonderful host committee.”
Schira spoke of Maple Creek’s proud rodeo tradition.
“A lot of great cowboys have come from Maple Creek, both professional and amateur, and there are ranching families everywhere.”
He noted the outstanding performance at the finals of Tate Beierbach, one of a number of young rodeo athletes in Maple Creek. Tate’s achievements included winning the chute dogging and team roping in the junior high division.
Three other local contestants also showed plenty of promise in the senior division: Olivia Parsonage, Sydney Murphy, and rookie Lily Wilson, who placed eighth in the barrels.
Schira said he had only been to Maple Creek a few times and was impressed by what he saw.
“I know the area a little bit and it’s beautiful country.”
Schira said this was the first time the rodeo finals had been held in Maple Creek during the five years he has been involved in the SHSRA.
While an honour for any community to host the finals, it required a lot of work.
“I think at the end of this week, the committee might not feel so honoured,” he laughed. “But they did a wonderful job and we were honoured to be able to come to Maple Creek and have our finals here. It’s a beautiful facility, a beautiful community, and we are grateful.
“The stock was great, the committee worked very hard to keep things running smoothly, and parents and contestants all did very well, participating in getting things going and keeping things going.”
Schira said that COVID-19 rules meant that numbers in attendance had to be restricted.
“We had to limit how many spectators were allowed in, so we were cautious on that and couldn’t advertise very much. There were some people locally who did I think come in, but we had to keep our numbers controlled.”
Asked whether he had ever competed in a rodeo, Schira said: “I’m typically more on committees and involved in organizing. I’ve hosted a lot of rodeos.”
Speaking of her love for high school rodeo finals, Donna Beierbach said that Maple Creek had a special place in the history of rodeos in Saskatchewan.
“It is the birthplace of rodeos in the region,” she said.