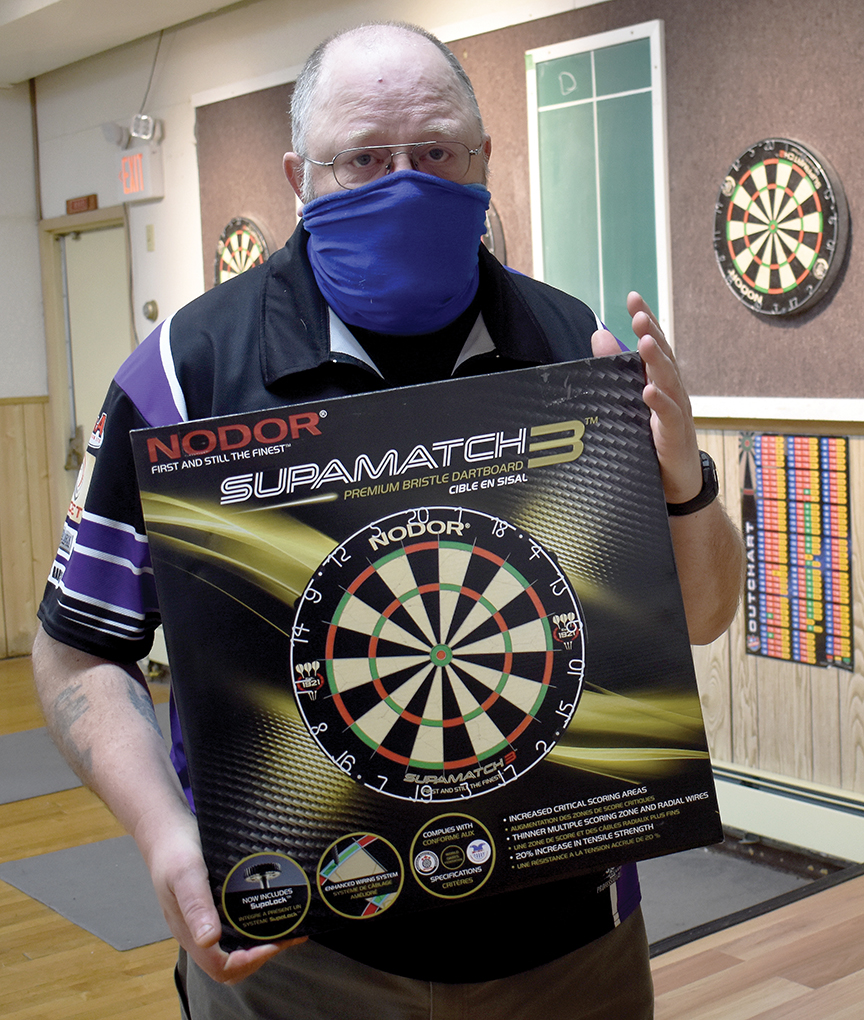 Getting ready: Lester Nickel, assistant darts coach, with one of the 20 new dart boards bought for the provincials.

Maple Creek has scored a bullseye as it tries to revitalize the local darts scene and become a provincial force again.
The town has been selected to host the 2022 Saskatchewan Darts Association Youth Provincial Play Downs over the February 19-20 weekend.
It was also going to stage the Adult Royal Canadian Legion Provincials between March 4 and 6.
However, it was announced on Wednesday that all Legion sports have been cancelled amid concern over the spread of the COVID-19 variant, Omicron.
Organizers of the Maple Creek Youth Darts League are keeping their fingers crossed that the youth provincials won’t be axed as well.
“As things stand, the youth provincials will be going ahead,” said Jamie Sheppard, darts coach, on Wednesday. “Of course, everything depends on whether the government changes its COVID-19 policies.”
The pandemic has taken a heavy toll on the youth darts scene. The once flourishing league was suspended for many months.
Numbers were also affected as players graduated from high school, or discovered other interests.
Sheppard said that landing the youth provincials was a great honour for Maple Creek.
He added that it would be a boost for local tourism, with visiting teams staying at Cobble Creek Lodge.
The venue will be the Royal Canadian Legion Maple Creek Branch #75 at 218 Maple Street, the regular meeting place for darts players.
The event will feature singles play and run from 9am to 5pm or 6pm. The public are welcome attend, as long as they can provide proof of being double-vaccinated. Players too must be double- vaccinated.
Teams from Nipawin and Saskatoon will be competing. The Maple Creek team is expected to include William Sheppard, Falco Berreth, Matthew Sheppard, Greg Kmiecik, and Tyce Glass.
It is also hoped that Kya Scott, who is studying marine biology in Victoria, British Columbia, will participate. Her addition would greatly strengthen Maple Creek’s prospects.
She is a former provincial champion in senior girls, and in 2019 won a silver medal in doubles action at the National Darts Federation of Canada’s Youth Nationals in Saskatoon (she also threw a 180) and she finished second in the Saskatchewan Youth Provincials in Saskatoon. In addition, Kya and Gabe Lachapelle, also from Maple Creek, won the female and male sportsmanship awards in the provincials that year.
Kya was one of three Maple Creek provincial champions in 2020. The others were Matthew Sheppard (Senior Boys), and Verity Pahtayken (Junior Girls).
Jamie Sheppard said parents and other volunteers will perform the role of chalkers at the Legion, while officiating will be carried out by provincial judges.
In preparation for the event, the Maple Creek Youth Darts League has bought 20 new darts boards, and 20 chalks boards, for about $4,000.
Money has come through sponsorship, and fund-raisers like a bottle drive.
“The kids have worked really hard,” said Sheppard. “It’s nice that we’ve been able to get sponsorship.”
Sheppard said stands for the boards were being painted. For the provincials, 10 boards will be affixed to each side of the main hall of the Legion.
“We are really looking forward to the event,” he said.
The hope is that the prestige of the provincials will be a springboard for the Maple Creek Youth Darts League to go on to hold a Canadian-ranked tournament.
There is also the feeling that a higher profile will attract new recruits to the darts club.
Before the pandemic, Maple Creek had one of the strongest youth darts leagues in Saskatchewan.
“We are trying to get our numbers up,” said Sheppard.