Come out for the big game on Friday 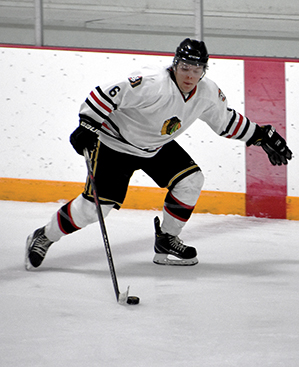 Maple Creek Senior Hawks will seek to tame Cabri Bulldogs in a top-of-the league showdown on Friday evening.
The Hawks improved their record to eight wins and two losses after sweeping aside Gull Lake Greyhounds and Frontier Flyers over the weekend.
It means they should be in confident mood for the Cabri match-up.
So far, honours have been shared in the teams’ two previous encounters this season.
On December 4, the Hawks were thumped 10-0 in Cabri after some of their players were unable to get to the game because of bad weather.
The December 17 contest, however, was a truer reflection of the rivalry, with the Hawks emerging 6-5 winners after a thrilling game.
Last weekend’s successive victories were atonement for a 6-4 away defeat to Shaunavon Badgers on January 15.
First, the Hawks swept aside a depleted Gull Lake Greyhounds 13-1 at the Maple Creek Community Arena. Then they overcame the Frontier Flyers 7-4 in Consul.
As a sporting contest, Friday’s game against Gull Lake never stood a chance.
Missing several players, the Greyhounds suffered a predictable fate – a 13-1 rout, which created a subdued atmosphere.
Al Fournier, the manager, praised the respect that the Hawks showed towards their outgunned opponents.
“They weren’t sticking it to them, they weren’t celebrating goals. Yes, you want to keep playing. You can’t just stand there, but we played respectful. We didn’t run around trying to take somebody’s head off. To me, that’s the key.
“Overall, we played a really good game in tough circumstances. I’ve been on the short end of a bad score and it’s tough to play. Kudos to our group.”
Fournier spoke of the challenges in facing a short-staffed side.
“When you are playing a team that doesn’t have the numbers, you know already that if you play smart you are going to wear them out. I thought we had a great first period. That was the key to the whole game. We took it to them. We can’t play a much better first period than we did.
“We were up 4-0 and that gave us a great start. What you worry about in those kinds of games is if it gets chippy or rough – you don’t want to get sucked into that kind of a game. So, the answer is to keep playing smart. I thought the second period went pretty good for us too, and they totally ran out of steam.
“The third period is probably the toughest period to play because you know the game is out of reach for them.”
On Saturday evening, the Hawks took on Frontier at the Consul Coliseum. A bus had been organized to take fans from Maple Creek to the game.
Those who attended watched the Hawks continue their good form.
Cody Florkowski and Dayton Reinboldt scored two goals each. Kyler Hawley, Blake Fournier, and Kaden Gramlich were also on target.
Lane Sanderson and Florkowski each provided three assists. Cole Bennett and David Haaf chipped in with two assists.
“It was a big win for the Hawks,” said Al Fournier.
The result gives the Hawks a record of eight wins and two losses for the season.
Friday’s game against Cabri starts at 8pm. Hockey fans won’t want to miss it.