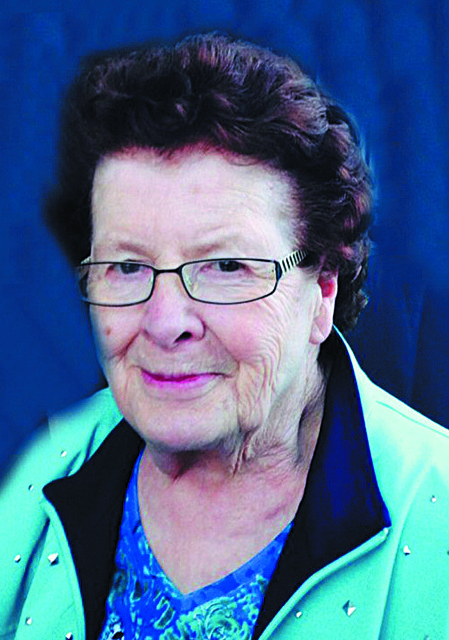 Craig – Mrs. Faye Caroline Craig passed away on May 17, 2015 peacefully with her family by her side at Brightwater Community Living in Saskatoon.
Faye leaves to cherish her memory her daughter Cindy (Kel) Evans of Saskatoon, daughter Kathy (Kelly) Perrin of Saskatoon and son, Sheldon (Anne) Craig of Prince Albert; her grandchildren, Lorelle Perrin, Sarah Perrin, Brittney Evans, Ashley Evans, Connor Craig and Kimber Craig; her brother Floyd (June) Dahl of Royston, B.C., sisters-in-law Phyllis Gerow, Eileen Clunie, Frances (Casey) Jones and numerous nieces and nephews.
Faye was predeceased by her husband Warren Craig, grandson Michael Perrin, her parents Ole and Jessie Dahl, her father- and mother-in-law Ogilvie and Jessie Craig, her sister Donna Hyde, her brothers-in-law Mal Gerow and Gordon Clunie.
Faye was born in Archerwill on June 30, 1939 and was the middle child to Ole and Jessie Dahl. Faye attended school in Archerwill and transferred to Tisdale to attend high school.  It was in Tisdale where she would meet her soulmate, Warren Craig.
Faye moved to Saskatoon to attend Teachers College after completing high school.     She married Warren in 1961 and together they moved to Waseca and started their family.    They moved to Meadow Lake in 1973 and it was here Faye was introduced to Eastern Star. Faye would be an active member in Eastern Star for years.
Faye, Warren and family moved to Maple Creek in 1981 and resided there until Warren’s passing in 2007.    Faye moved to Saskatoon where she purchased a condo in the Sierras of Erindale. She treasured her condo and spent many hours enjoying her swing on her balcony.    Faye began to have memory loss and in 2013 moved to Brightwater Community Living in Saskatoon.  She loved her home in Brightwater and the nurses shared many humorous stories of Faye right up to her passing.
Faye’s many activities included golfing, fishing, curling and of course, she cherished her time with her grandchildren.
A memorial service was conducted at Saskatoon Funeral Home on May 23 at 11 a.m. with interment at the Tisdale Cemetery.
In lieu of flowers donations can be made to the Alzheimer’s Society of Canada and/or to the Canadian Lung Association.  Condolences may be emailed to mail@saskatoonfuneralhome.com. Arrangements are entrusted to Saskatoon Funeral Home.