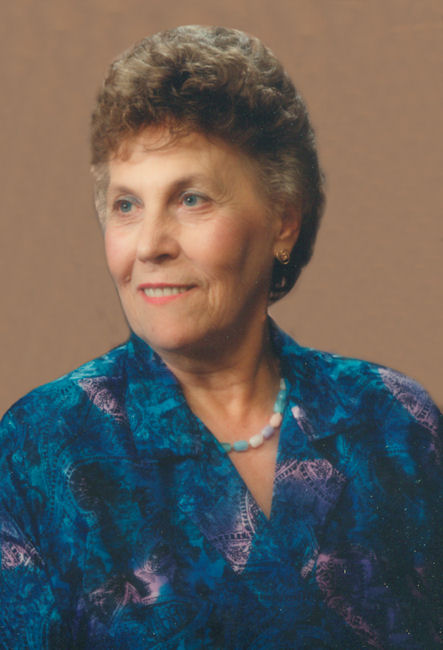 ENGLISH – Adele Freda English passed away on Thursday, November 12, 2015, at the age of 86 years, beloved wife of the late Merle Auxier English.
She leaves to cherish her memory four children, Don (Pat), Darcy (Agnes), Diane (Jack) Swanson and Maureen (Howard) Stirling; eight grandchildren, Rhonda (Kevin) and their children, Karly, Kyle and Dane; Jason (Sarah); Jaylene (Curtis) and their children, Jaxon and Grady; Bris (Mike) and their daughter Elise; Michelle (Scott) and their children, Reece, Riley and Willow; Jacki (Harvey) and their children, Dylan and Quinn; Kendra (Lee) and their children, Xavier and Kooper; and Ashley (Drake); her sisters, Doreen (Ken) Schreiner and Myrtle (Leonard) Kettner, as well as numerous nieces and nephews.
She was predeceased by her parents, John and Edna Jansen; her husband, Merle on February 14, 1998 and her brothers, Clinton on February 5, 1961 and Garry on September 3, 2003.
Adele was the eldest of five children born to John and Edna Jansen on December 11, 1928.  She grew up during the great depression on the family farm on “the Bench” south of Carmichael, Saskatchewan. She told stories of many great memories playing in the creek and walking or riding her horse to the one-room country school.  After finishing high school in Gull Lake she worked as a telephone operator in Swift Current.
She met her future husband, Merle, while he was custom combining for her parents and neighbours in the area.  They were married on October 15, 1948, in Medicine Hat and honeymooned  driving what was then a narrow road through the Rocky Mountains to Vancouver. She spent most of her life on the family ranch north of Maple Creek on the edge of the Great Sandhills.  In 1978, they retired to Maple Creek until Merle’s passing in 1998.
In 2002, she moved to her condo in Medicine Hat until her health failed and then to the Good Samaritans. She was honoured to have been the president of the Saskatchewan New Democratic Party as well as running a candidacy for MLA in the seventies.  She was also volunteer and advocate for the Maple Creek Museum.  She loved to bowl, golf and fish. She also enjoyed square dancing; shuffleboard; biking and card games. She loved to travel and went on numerous trips. Adele was an avid reader and enjoyed her computer till she lost her sight around 2013.
Adele enjoyed her grandchildren and great grandchildren and was always proud of them all.
The funeral service was held in the Pattison Chapel on Wednesday, November 18, 2015 at 1:00 p.m. with Life Celebrant, David Townsend.  As an expression of sympathy donations may be made to the Canadian National Institute for the Blind #102, 520 2nd Street SE, Medicine Hat, AB T1A 0C6.   To e-mail an expression of sympathy, please direct it to: pattfh@telusplanet.net subject heading: Adele English, or you may visit http://www.pattisonfuneralhome.com  and leave a message of condolence.   Arrangements are by the Pattison Funeral Home and Crematorium 540 South Railway St. SE,  Medicine Hat T1A 2V6.  Please call 1-866-526-2214 for further information.