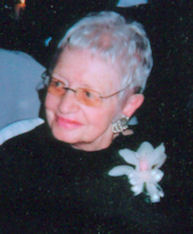 ANNETT – Marjorie ‘Marge’ Mae Annett of Medicine Hat died on Monday, November 16, 2015, at the age of 97 years, beloved wife of Harold Wellington ‘Cricket’ Annett.
She leaves to cherish her memory Joan Annett, Sarnia, Ontario, Ross W. Annett, Brooks, Jeanne Annett, St. Albert, Robert (Carol) Annett, Petrolia, Ontario, William R. Annett, Brooks, Kay Campbell, Alvinston, Ontario, Beverley Lewis and Shirley Douglas, Petrolia, Ontario, Alma Robb and Wilma Bell, Strathroy, Ontario, Douglas Burchill, Watford Ontario, Sandra Urie, Seattle, Washington, Susan Urie, Vancouver, BC, her special children John (Bonnie) Knox, Wendy Knox Gold, Calgary, Jennifer (Ron) Schafer, Maple Creek, Barb (Bob) Ayling, Medicine Hat, Norah (Glenn) Johnson, Regina,  Joan (Dick) Foster, Calgary, Robbie (Mon) Bennett, Thailand, Roland (Doreen) Bennett, Diana (Wally) Richardson, Kelowna, BC.
She was predeceased by her husband Harold Wellington ‘Cricket’ Annett on October 17, 1982.
Marge grew up in Watford, Ontario, the youngest and adored daughter of Edith and John McConkey. Her parents had a women’s clothing store and Marge helped at the store through her school years. She was always influenced by fashion through her parents and decorating through her beloved Aunt Lou who owned a fine furniture store in Toronto. She had wonderful memories of her parents, grandparents, the family cabin near Sarnia, Toronto and riding the streetcar to her first job. She was well liked and Cricket considered himself lucky to be the one who captured her heart. They were married and came out west, first to Maple Creek and then to Medicine Hat, growing their cattle operations and becoming successful partners in the feedlot business. There were many cattle deals worked out around their kitchen table over the years. Along the way they made great friends in both communities, immersing themselves into Rotary, hockey, travel to Hawaii, friendships and helping others. To see them waltz together was to see grace in motion.
After Cricket died, Marge built a condo by the river in Medicine Hat, travelled, tended to her home and flowers and hosted her family and friends. She was famous for her homemade bread which she continued to bake right up to her death even though her eyesight was gone. She was beloved by her family and friends especially Barb Ayling who took care of her to the end of her life. Marge was a formidable woman. She was beautiful, strong, smart and especially kind. Everyone also remembers her incredible blue eyes. She will be missed by the people who loved her.
We wish to thank the nurses and staff of 4 West at the Medicine Hat Regional Hospital who cared for her. They kept her comfortable and well rested so she could make her final journey to meet her loved ones who have gone ahead to wait for her.
The funeral service was held in the Pattison Chapel on Monday, November 23, 2015 at 1:00 p.m. with Life Celebrant, David Townsend. Interment followed in the Hillside Cemetery.  Those who wish to remember Marg with  a donation may do so to the Maple Creek Hospital or the Medicine Hat Regional Hospital (cheques made payable to M H @ D Health Foundation) 666 5th Street SW, Medicine Hat, AB T1A 4H6 or visit http://www.inyourcommunity.ca. To e-mail an expression of sympathy, please direct it to: pattfh@telusplanet.net subject heading:  Marjorie Annett, or you may visit http://www.pattisonfuneralhome.com and leave a message of condolence.
Arrangements are by the PATTISON FUNERAL HOME AND CREMATORIUM 540 South Railway St. SE,  Medicine Hat T1A 2V6.  Please call 1-866-526-2214 for further information.