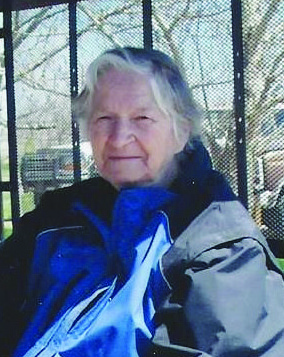 FRAME –  Joyce Leota Frame was born August 16, 1925 in Watrous, Saskatchewan the daughter of Murray Read, a jovial carman for the CNR and Caroline Read, a stern but amazing cook, seamstress and housekeeper. Joyce went on to spend her life trying to be “half the person” that Leota MacDonald was, the midwife she was named after. She was the fourth of five children, and had her youngest sibling not been a girl she was prepared to trade her to a friend for her dollhouse. Luckily her sister Enid was born, so the trade was abandoned.
In 1936, following a promotion for Murray, the family moved to Regina. After finishing school in 1941, Joyce completed normal school to become a teacher. She did not begin teaching that fall as she was hoping for a school to open in Regina. Then a boarder in her mother’s boarding house told her West Plains school needed a teacher so she headed for Consul and started teaching in February 1942. She taught till the end of June of that year and those five months were the extent of her teaching career. She then returned to Regina to work as part of the war effort in an ammunition factory and a place that rewound electrical motors. But she had met Hughie Frame while in the Consul community and when she left at the end of the school year, he proposed. Not having enough money for an engagement ring, Joyce paid for it and later Hughie was able to sell a cow (“likely his only cow” Joyce would say) and pay her back. For the next few years, when harvest was over Hughie would head to Regina and work the winters there to be near to Joyce.
In the fall of 1945 they went to Moose Jaw with Hughie’s brother Jimmie, and Joyce’s brother Lloyd and sister Maida.  They were married in front of the Justice of the Peace and then went to the Trianon Ballroom to go dancing.  From there they built a small shack northwest of Consul and started to farm. Their daughter Carol arrived in 1950, followed shortly by their son Murray in 1952. A social pair, their life was full of family and friends with both of them having siblings and parents close by as Joyce’s parents would come out each summer to visit. Her mother’s help freed Joyce up to work in the field. She was far more comfortable in this role as she was never known for her cooking or housekeeping skills. She supported Hugh as well, who was intrigued by stories of flying in the war, got his pilot’s license and started an aviation and crop dusting business. Joyce could be seen ducking as he flew overhead and marking the spray trails as he crop dusted. The two were also surprised when their family grew to five in 1965 when their daughter Kristina was born. As Tina became active and social, Joyce’s life was kept busy by accompanying her to many sports and cultural events. On all of these excursions, she would be seen with knitting needles in hand as she knitted sweaters for all her grandchildren, friends and neighbours. Life continued in the community with dreams of retiring and flying across the country but before this could happen Hughie became ill with Parkinson’s and could no longer fly. This prompted them to instead winter in Arizona and again, they made many friends and enjoyed their winters away.
Joyce’s greatest loss was in 1992 when her daughter Tina suddenly died. Shortly after this, farming became more difficult for Joyce and Hugh, and Joyce was able to convince Hughie to semi-retire to Medicine Hat with many trips back home to the farm. She spent many years managing the care and treatment for Hughie’s disease and when he died in 2001, they had been married 56 years. She then traveled with her daughter Carol and was thrilled to drive across Canada to see the Niagara Falls, large ships travelling through the St. Lawrence Seaway and “My Fair Lady” at the Stratford Festival.
Unfortunately Joyce was not able to completely enjoy her retirement as she became ill with Alzheimer’s disease and slowly slipped away over the last 7 years. Yet long after she forgot our names, she would light up when any of us arrived at her care home and would excitedly tell the other residents “these are my people.” In her last years, she was lovingly cared for by the staff of Leisure Way Group Home of Medicine Hat, where she fondly became “Joycie”.
“Her people” will never forget her love and complete devotion to family. Joyce is predeceased by husband Hugh Frame, daughter Tina Danskin and her siblings Lloyd Read, Maida Schafer and Albert Read.
She is survived by her sister Enid Burt, daughter Carol (Clare) Backman and son Murray (Wendy) Frame, 10 grandchildren and 11 great grandchildren and numerous nieces and nephews.
In lieu of flowers, charitable donations may be made to Leisure Way Group Home of Medicine Hat. A Memorial Service will take place in July, date to be confirmed. Binkley’s Funeral Service, Maple Creek and Leader in charge of arrangements. 306-662-2292 http://www.binkleysfuneralservice.com