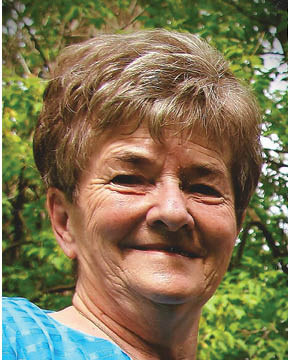 At 68 years old, Gayle was surrounded with love as God called her home.

Gayle Arleen Nazarenko was born in Maple Creek SK on August 30th 1949 to Michael and Ruth Nazarenko. She was an only child and shared a very close and special relationship with her parents.

Gayle went to school in Maple Creek and in 1965 attended hairdressing school in Regina SK. After graduating she moved to Swift Current SK where she lived and worked with her close friend

Marlene Keslick. She met Marlene’s brother David and they were married in Maple Creek in 1968.

In 1972 their son Kelly was born and two years later in 1974 their daughter Donna arrived. David and Gayle lived a short time in Hughton SK where David managed a feedlot and Gayle worked as a hairdresser in Elrose SK. In 1975 the family moved to Maple Creek to live and raise their family where Gayle could be close to her parents. Gayle’s parents farmed west of Maple Creek and the family took many vacations as a group of six. Gayle set up a hairdressing shop in their home in Maple Creek where she could work and be around for the kids.

of Heaven a few short years later at the age of 19.

In March of 1990, Gayle was married to Richard James Friday. Dick became a loving companion for Gayle and together they were blessed to find happiness for the next 28 years.

Gayle was actively involved in the Patricia Rebekah Lodge #28 and the IOOF. She was an avid novel reader and enjoyed playing cards of any kind, especially crib and canasta. She was an amazingly organized woman. Her record and book keeping skills were admirable. She kept detailed family history records to pass down and her handwriting was immaculate. She would have made any trained secretary jealous of her skills.

She was overjoyed to have extended family to spend time with and make memories with. Gayle enjoyed conversation and visited in person and over the telephone with any of her loved family and friends.

They were involved in the 463 Southern Alberta Lighthorse where Dick was a commanding officer for 12 years with his trusty “sidekick” Gayle by his side. She enjoyed spending time watching Dick create his one of a kind Silhouettes. This artwork quickly became popular and grew into a business that they owned and operated together for several years. These steal Silhouettes can still be seen far and wide. A testament to their working relationship and shared love.

Gayle is truly loved and will be missed dearly by many family and friends.

We would like to express our sincere Thank You to the staff at the Maple Creek Hospital and all who shared in Gayle’s life.

Funeral arrangements entrusted to Binkley’s Funeral Service, Maple Creek & Leader. Condolences may be offered to the Family at binkleysfuneralservice.com

“Live each day, as if it were your last

It is written in the Stars, your destiny is cast”