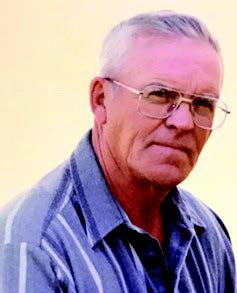 LOGAN – William Logan, beloved husband of Shirley, passed away peacefully February 20/2018 with his family by his side.

In 1958 he married Shirley Appleyard and together they raised 5 children while farming the Logan homestead just east of Gull Lake.

Bill was well known for his hockey talents. “Bill the Bulldog” was a familiar name around the hockey rinks during winter months. His love for the game has been passed on to all his children, grandchildren and great grandchildren. He loved to do woodworking in his spare time and the family were given many pieces of his art work. As much as farming and dealing with cattle filled up most of his days, there was always time for yard work and getting the garden in every year.

Bill was not one to travel, or be away from the farm. He was most content being at home, having family stop in for coffee or a meal, and caring for his cattle. The drive around the block was almost daily, and if not he would venture to one of his kids farms.

THE CELEBRATION OF LIFE WILL BE HELD FRIDAY, APRIL 6TH AT 2:00 AT THE GULL LAKE HALL.

For those wishing to make donations in remembrance of Bill, they can do so to the Gull Lake Skating Rink or Autumn House.

He Only Takes the Best
God saw that he was getting tired,
A cure was not to be.
So He put His arms around him
and whispered, “Come with Me.”
With tearful eyes, we watched him suffer,
And saw him fade away.
Although we loved him dearly,
We could not make him stay.
A golden heart stopped beating,
Hard working hands to rest.
God broke our hearts to prove to us
He only takes “the best.”