Decades spent keeping the tradition of baseball on the prairies going strong was celebrated with Bill and Debbie Gergely recognized with the Sask-Alta Baseball League’s 2017 Grant Ehnisz Memorial Trophy for outstanding dedication and sportsmanship.
“It’s a sport we grew up with back as a kid,” said Bill about his longtime love of the game. “Come spring time, we got the old glove out and found a patch where the snow had melted.”
The couple’s involvement in the league stretches back for decades, explained Bill, who started playing with the league in the early 70s, then got involved in umpiring, and was on the executive for numerous years, including serving 18 years as president.
For Bill, one of his biggest accomplishments was helping to establish the very award he has now been recognized with, following Ehnisz’ tragic accident in 1998.
The award has been a stepping stone for half a dozen people towards the Saskatchewan sports hall of fame, said Gergely.
Bill and Debbie were married in 1981, and she also became involved with the league.
“Where she really stood out is her bookkeeping abilities,” said Bill, about the behind the scenes work that helped to keep the league going.
Debbie’s love for history also was a big part of her contributions to the league, Bill explained, as she would dig for information about the history of the league, finding old photos, information, articles and more. It was Debbie’s hard work that helped to make the league’s 50th anniversary book possible.
Bill has since stepped down from the executive, and he actually suggested to those making the decision on the award that it was Debbie who deserved it.
The league ultimately recognized both of them on July 23 in Gull Lake, as the community hosted the 2017 championship game, where the Swift Current Yard Goats won for a second year and a row, with a 7-4 win over the Cabri River Rats.
Bill said he’s gratified to see the game of baseball continue onwards.
“Hats off going to people who are doing it now, to the people who have kept the league going.” 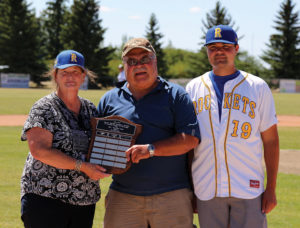 Photo MEGAN LACELLE
Bill and Debbie Gergely are the 2017 recipients of the Grant Ehnisz Memorial Award for their outstanding dedication and sportsmanship in the Sask-Alta Baseball League. They were given the award July 23 during the league championship in Gull Lake. The couple is pictured with their son Ed who plays in the league with the Richmound Rockets.