Businesses in the area kept busy this year 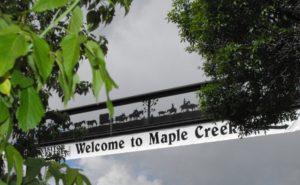 More and more cars were seen driving through the streets of Maple Creek and the surrounding areas reported larger volumes of activity.

It appears the talk around town is that tourism experienced a boost this year.
Though it’s too early to tell the full extent of the boost, it’s clear it’s been busy. There are a handful of reasons as to why this increase was seen. As part of Canada 150 celebrations, Parks Canada offered free access to parks and historic sites across the country, enticing more Canadians to get out there and explore all the beauty this country has to offer.

That’s one correlation Karen Southwood, manager of Cobble Creek Lodge, says definitely had an effect.
“Canada 150 boosted the hotel for sure. A lot of the people who said they were travelling because of that, so it truly had an effect.”
Karen added that they have been very busy in comparison to the past couple years when they launched. She also noted that most of those staying in the Lodge were not from the area.

“I would say that about 90 per cent of the visitors were tourists.”
But it wasn’t just the Lodge that saw an increase, as restaurants were also kept busy. Grotto Gardens, which has grown in notoriety since its launch, saw larger numbers this year.

“We got bigger numbers than we did last year, last year was our first season open, and our numbers are up. Although we don’t always count people as they come up, we just know by our sales,” said Dana Hassett, who is one of the owners of the family-run business. This year they incorporated a guest book to gauge where visitors are coming from.

The guest book gave some insights as to where people were coming from, which not only explained the different accents they were hearing but also showed it wasn’t just Canadians who were visiting. There were guests from Florida, San Francisco, Germany, England, and even from the Latin countries, Guatemala and Nicaragua. The increase in activities in and around Maple Creek is another factor that Dana pointed out which has helped.
“There are so many things going on in the area now that it brings more people in because they know there are more things to do,” she said.
The new visitor centre on the highway headed by Gale Kesslar, executive director of the Cypress Hills Destination Area, confirmed there was definitely more traffic flowing to businesses in the area.

“We can see an increase, and all of our member businesses that are within Maple Creek and the surrounding area are reporting to us that they are busy.”
She added however, though Canada 150 is not hurting travel in the area, it’s not the only contributor.
“I think conditions in the United States are helping. Also, the town and the Cypress Hills Destination Area partnership on the new VRC (visitors centre) out on the highway, I think that is helping as well,” she said.

Kesslar also spoke about a plan they incorporated to bring more people into town can also be credited with helping.
“We do something called conversions when somebody walks into the visitor center and they weren’t necessarily going to go into Maple Creek, they didn’t know the Cypress Hills were there, we are able to turn them off the highway to come in. We are amazed at how many conversions we are getting where people are literally saying ‘I didn’t know that was there’.”

It’s too early to give out exact numbers about how big of an increase there was in tourism this year but it’s no question that various factors have played a role.
The increase in activities in the area, such as goat yoga provided by the Grotto Gardens, zip lining now available at the Cypress Hills park, Canada 150 celebrations, and better marketing to attract more people into town have all played a role.
The hope going forward is that things only go up from here and that Maple Creek and the surrounding area becomes a more popular hub for those travelling through the province.