Wall says it was just his time 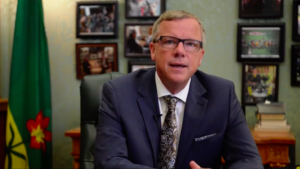 The premier took to Facebook to make the announcement on Thursday August 10. The 5 minute video discussed his reason why along with the progress since he took office.

Premier Brad Wall made the announcement last week that he will be retiring from politics and stepping down as premier, but will remain until party elects a new leader.

“Together with Tami (his wife), I have decided that now is the time for renewal ­— for my party, for the government, for the province. It’s time for me to retire from politics,” Wall said Thursday morning in a video posted to Facebook.

Wall, who began his political rise serving as MLA for Swift Current, until being elected leader of the Saskatchewan Party in 2004, would have served as Premier for 10 years come November. A milestone that was always on the back of Wall’s mind.
“This November will mark 10 years since I had the incredible honour of being elected as premier of this wonderful province that I love. I’ve always thought that the 10-year mark — should I be so fortunate to serve that long — might be the right time to re-evaluate.”
Wall spoke about the highs and the recent lows but remained firm that the party achieved the impossible.

“We set a goal of seeing Saskatchewan grow by 100,000 people in 10 years. Saskatchewan has now grown by 160,000 people during our decade of growth — 40 thousand short of 1.2 million people,” he said.
Wall also highlighted the job creation in Saskatchewan, which saw 67,000 more jobs in the province, making it the second-highest job creation in Canada over that time.
But recent past months have not been the best for the premier and the party after passing a budget that saw highly criticized cuts.

Speaking with Maple Creek Times-News, Wall addressed the budget he knew would turn heads around the province.
“In this particular budget that was passed, we knew it would not be popular. If we wanted to do the easy thing, or something to protect the approval rating of government and myself, we wouldn’t have done those things, but we believed them to be necessary.”

The approval rating is another topic Wall discussed, though his rating remains one of the highest in Canada’s history, it did take a few hits.
“Those approval ratings are strange, aren’t they? We set a lot lower bar for our politicians than we do for our kids when they are in school. I think this last round of ratings I was at 48-percent approval, just less than 50, and that was the best in Canada. If our kids come home with that on our report cards we are concerned, (but) for our politicians that’s somehow the best,” he said.

The future of who will be the new party leader and premier is unclear at the moment, but one thing Wall knows for sure, they better be able to represent the agricultural community which makes up Saskatchewan.
“I think whoever is the premier of Saskatchewan better be able to advocate for and defend the interests of agriculture. We have 44-per cent of Canada’s arable acres, the list of our exports is long, and of course, we have a very good beef herd, so whoever takes over needs to be able to advocate.”

Wall is known very well for his advocacy and representation of the agricultural community. He partook in many trade missions to India, China and Southeast Asia as part of the plan to reduce the export dependency to the U.S., which at one point stood at around 60 per cent — since then it has dropped to about 50 per cent, and exports to Asia have increased 100 per cent in certain markets.

Wall received many messages of support including a tweet from Prime Minister Justin Trudeau and a phone call from the former prime minister Steven Harper. The two talked about the state of affairs of the country, where the province was 10 years ago and where it is now, along with congratulating Wall for all his work.
Cypress Hills MLA Doug Steele wasn’t shocked about the news but believes Wall will be deeply missed.
“It’s been a great opportunity working under the leadership of Premier Wall. He was an amazing individual, strong common sense, straight-up fair individual who represented our province in a very exceptional way. He brought Saskatchewan from a place no one knew about really to a level on the provincial, national and international scale that says, ‘Hey we’re not just Alberta’s neighbour,'” he said.

Premier Brad Wall also had a message of deep thankfulness to southwestern Saskatchewan.
“The whole southwest … as in Maple Creek or Cypress Hills Shaunovan, Swift Current, it just feels like home. And the people there, whether or not they agreed with everything the government has done, they’ve been just so wonderful to me and my family and I just want to thank them.”
As far as what the future holds for Wall, no one including himself is too sure, however he did ask, “is Maple Creek News hiring?”