Tenille Camphaug and her grandma Nesta have been pranking each other on April 1 for 22 years – and the family tradition is still going strong.

Phoney poop, sham spiders, dummy dog food, counterfeit cupcakes … nothing is off limits for these damsels of deception. Nothing is too outrageous for these mistresses of mischief.

On Monday, you may have seen Tenille out and about in Maple Creek with a sign asking: “Have you seen my sister?” It adds: “She is VERY OLD, ENGLISH and SENILE. Answers to the name ‘Queenie’. May be lured by marmite sandwiches.”

If that weren’t enough, there is a picture of a very regal-looking Nesta, wearing a tiara and super dark designer shades, and carrying a bottle of bubbly and a golden goblet. It is not everyone’s image of a grandma, although she looks like a lot of fun. 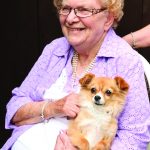 Is it a good portrait of 94-year-old Nesta? You be the judge; check the photo above.

So how did the April 1 antics start? Tenille blames grandma, saying she started it by pretending that a Kurt Browning figure skating event had been cancelled.

“I was just 15 and so looking forward to going,” said Tenille. “Then I was told it had been cancelled and I was devastated. I even received flowers, supposedly from Kurt Browning.”

Tenille also tells of the day Nesta poked fun at her for not being married.

“She posted a picture of me sleeping, with the words ‘still single and tired of looking’.”

Then there was the time Nesta gave her Cocoa Puffs mixed with dog food.

Of course, Tenille always gives as good as she gets, once serving Nesta a special cupcake with icing dyed pink and made from Mayonnaise. She also wrote an official-looking letter to Nesta, saying that an access road to Cypress Park had been closed.

“She was so annoyed because she liked to use that road,” laughs Tenille.

At other times she tricked her grandma with fake poop and fake spiders – always in the name of fun.

In case anyone was fooled by Tenille’s sign this week, there was a giveaway in tiny letters on the bottom right. “April Fool’s, Grandma. Love Tenille.”

Oh, and if you’re wondering about Marmite, it’s a British food spread made from yeast extract. Great for bolstering fat loss. Delicious to the English. Disgusting to everyone else.