PHOTO BY ASHLYN GEORGE- People have been taking full advantage of the winter programming at Cypress Hills Interprovincial Park.

It’s been a busy few months at Cypress Hills Interprovincial Park-Saskatchewan. Visitor numbers have increased at a dramatic pace, thanks to more winter programs and families looking for outdoor recreation activities close to home.
‘Winter in the Hills’ has been a huge success, according to park manager, Royce Pettyjohn who said staff put a greater focus on winter activities than they had done in previous years.
“The park has never made a concerted effort for winter activities. We really weren’t focused on it. Now we are,” said Pettyjohn. “We now are more consistent and have expanded our winter programs and it has appealed to people.”
There has been plenty for families and individual outdoor enthusiasts to enjoy. From traditional activities like ice fishing, snowshoeing, and cross country skiing, there’s definitely something for everybody.
There’s also a snowmobile area with trail, toboggan hill and mini luge track, and ice castle building at the Loch Leven main beach area. Folks wanting to do a little sleuthing can take in the geocaching. Information and GPS units are available at the administration office or entry gate.
Some guided adventures continue until early in March, including Stars and Stories (night sky exploration) and the Ice Age Snowshoe Hike.
With the increase in visitors, Pettyjohn said there has not been any issue with people not abiding by COVID related restrictions.
“The public has been very good at adhering to the protocols,” he said, adding that all of the activities are those that can be enjoyed by families and individuals.
Whether more people are visiting the park because of a more targeted focus on winter programming or if they are just needing to get in some fresh air from being cooped up due to COVID, everybody is benefitting.
“People are learning to love winter,” said Pettyjohn, noting that the revenues for this winter are the greatest seen at the park in 20 years.
“Our revenues are dramatically higher over any winter here for the past 20 years,” he said.

All work and no play…
As people frolic and play in the great outdoors at Cypress Hills Interprovincial Park, there is another group of people there, not to go snowshoeing or sledding, but are hard at work inside the swimming pool facility, as part of a complete refurbishment of the interior.
Built in the mid 1980s, the facility has seen several upgrades over the years, but was in need of a complete overhaul, according to Bryan Davis, executive director of Infrastructure and Capital Planning for Saskatchewan Parks, Culture and Sport.
“Since the building was over 30 years old, it needed a complete refurbishing,” said Davis, adding that the project is a $900,000 expenditure from the annual Parks capital budget. “A couple of years ago a complete exterior upgrade was done. Now, we are refurbishing the entire interior.”
Dunmac General Contractors from Saskatoon won the bid when the project was tendered publicly last year. Work being done includes, electrical, flooring, wall tiles, plumbing, and paint, with mechanical work including a new HVAC system.
Work is also being done on the jet pool and sauna.
Davis also noted that a family change room, as well as 10 private change rooms are being added.
The swimming pool facility is scheduled to be ready for the upcoming travel season.
Another project, the re-development of the Pine Hill campground is expected to commence this spring, with the tenders for the $2.5 million-project expected to go out within the next week or two.
The project will involve the complete redevelopment of the former campground that has been closed for the last decade when Sask Parks did clear-cutting of over-mature trees that were rotting and being threatened by insects such as the mountain pine beetle.
Trees at the Pine Hill campground were removed in the winter of 2011 and seedlings planted the following spring. Natural regeneration has also aided in the rejuvenation of the trees to the area. During the past decade, as the trees were growing, the campground has been closed to the public.
“The pine trees have re-generated over the last 10 years and this is a priority project for 2021-22,” said Davis.
There will be 65 new campsites, all electric, with about 20 having full service (electric, water, and sewer) at the new campground.
“There is major earthwork to be done. The former campground was mainly for tenting,” said Davis. “The new campsites will vary in size, with sites large enough for RVs and smaller sites for tents and smaller trailers.”
A new construction access road will be built and once the project is complete will serve as an emergency exit route. The water and wastewater systems will be extended to the Park’s system and a new sewage lift station will be built. The project will also include a campground service centre with showers and satellite showers throughout the campground.
Landscaping will be done next spring and a natural playground in a subsequent phase of the development.
“There’s a lot of work to be done, mostly earthwork and the structures will primarily be built of masonry blocks, he said.
The Pine Hill campground project was one of several to receive funding from the Provincial Park Stimulus Package, the Saskatchewan government announced last May. Saskatchewan Landing Provincial Park also received funding through the program.
Davis said they are hoping the new Pine Hill campground will be open for campers for the summer of 2022. When the 65 sites at Pine Hill campground open, there will be over 500 campsites in total at the Park. 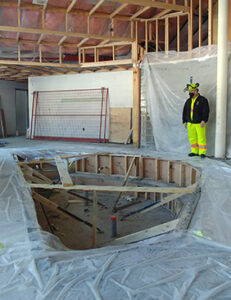 PHOTO SUBMITTED BY ROYCE PETTYJOHN- The work goes on for the crews at the swimming pool at CHIP- Saskatchewan as the entire interior is being refurbished.