Up to 80 people listened to Ontario activist Chris Sky at a rally in Maple Creek on Saturday.
Sky called on Canadians to unite in preserving freedoms, which he claimed were under attack from a government more interested in ruling its citizens than serving them.
He criticized the idea of vaccine passports, argued against mandatory mask-wearing, and said his goal was for small businesses across Canada to open up by the May long weekend, without restrictions.
“Now is the time to take action,” he declared, standing on a park bench and using a megaphone. Present were local residents and members of Sky’s “freedom convoy”, which arrived at about 1.30pm, crawling up Highway 21 between parked cars full of curious onlookers.
Horns sounded as the procession of vehicles, some decorated in flags and strongly-worded signs, became visible.
“Have you had enough tyranny yet?” said one sign, while another read: “Stand Up, Speak Out, Fight Back against all lockdowns, mandatory masks, mandatory vaccines.”
A blue car with a British Columbia number plate had the message “COVID PCR TEST IS FRAUD!” attached to its hood and sides, along with the painted words “False Positives”.
The convoy has been on a cross-country tour, starting in Vancouver, and stopping off at Kelowna, Calgary, Maple Creek and Regina before ending in Thunder Bay, Ontario.
Police estimated between 60 and 80 people turned up at Lions Park for the 45-minute event. Nobody wore masks apart from a counter-protester carrying a “Keep Maple Creek safe” sign.
Under Saskatchewan’s public health orders, outdoor gatherings of a maximum of 10 people are allowed.
Some protesters told the Maple Creek News-Times that the turn-out would have been far greater had Sky’s visit – condemned by Saskatchewan Premier Scott Moe – not proved so divisive on social media. The issue has gained further heat from the recent surge of COVID-19 cases in the community after an Easter weekend party near Maple Creek.
The RCMP maintained a low-key presence on Saturday, staying outside the gathering. There were two masked officers from the local detachment: Constable Marc-Antoine Huard and Constable Anaztazia Inkster. Also present was Bradford Giesbrecht, senior public health inspector from Saskatchewan Health Authority.
“I’m here to work with the RCMP and the local detachment to keep the peace,” Giesbrecht told this newspaper. “I’m really hoping that we get a nice, peaceful protest here today and everybody abides by the rules and guidelines that have been set out by the Government of Saskatchewan. I hope there will be some good messaging.”
In a brief interview after he got out of his car, Sky, whose real surname is Saccoccia, told the News-Times that he had been invited to Maple Creek by Kathy Schneider.
“Maple Creek is awesome,” he said. “I was here about a week and a half ago. I was on my way to Calgary and this Kathy Schneider, a very good friend of mine, said ‘you are going to be driving by Maple Creek, stop and we will have breakfast’. We did. And then I told her I would be driving back through here … so it was a natural stop.”
Later, Sky was asked whether he had been paid to appear in Maple Creek.
“Absolutely not,” he replied.
Colten Sustrate, from Maple Creek, appeared at the rally with his baby daughter, Harper, who turns 1 next month.
Asked why he had shown up, he answered: “I don’t want my girl to grow up in a world full of fear.”
Sustrate had a banner. On one side it proclaimed “My grandpa needs love not lockdowns”, on the other it said: “More love! Less Fear!”
Laurie Leigh explained why she was at the rally.
“We need to protect our communities and small businesses from government overreach,” she said, adding: “This is not a health issue, it is about control.”
Lily Briggs, also from Maple Creek, said the message of the event was “freedom, freedom, freedom”.
“Freedom of choice, movement and Christianity,” she said.
One woman, who described herself as a “helper”, distributed leaflets, including one on the Canadian Bill of Rights, a COVID-19 daily epidemiology update, and a graph showing the number of deaths in Canada from 2001 to 2020. Between July 1, 2019 and June 30, 2020, there were 300,314 deaths reported in Canada, according to the statistics. Overall, the annual number of deaths recorded in Canada experienced an increase between 2001 and 2020.
The woman said that there had not been a dramatic spike in deaths during the period of COVID-19.
“We are a local freedom group,” she said. “We are not anti-maskers or anti-vaccine. We are pro choice. If you want to wear your mask, you wear it.
“I haven’t worn a mask for a month or more. I did wear it to start with when I still thought COVID-19 was a deadly disease, but it’s a flu. Our kids had a great big party here. There were 40 cases there, nobody had to go to the hospital, nobody had to go on a ventilator, nobody died. They all had a little tickle in their throat or maybe a sneeze or two. Nobody was sick.”
The woman said the government was feeding the public nonsense, adding that Justin Trudeau, prime minister of Canada, was all “pushy-pushy” with China and trying to bring in a one-world order.
“If we don’t stand up now and take our rights back we are going to lose them entirely,” she said.
The placard-carrying counter-protester was Sandy Sanderson. His sign read: “Wear your mask. Keep Maple Creek safe, Support our healthcare 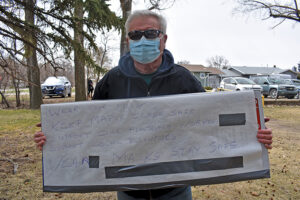 Malcolm ‘Sandy’ Sanderson was the lone visible protester to attend the rally.

workers. Support local businesses. Wear masks, stay safe.”
Originally from England, Sanderson has lived in Canada since 1967.
“There is a health care crisis in Canada,” he said. “In some parts of Canada, the system is nearly collapsing. There are very few ICU beds. Here in this community we’ve been relatively safe from COVID. But all of a sudden because of irresponsible people we have an outbreak in the community. If we continue to allow people to spread negative stories about this being a hoax we will get more problems in the community and I think we need to start telling these people ‘don’t spread nonsense in Maple Creek’.”
He added that the COVID-19 crisis had touched him personally.
“My wife’s mother passed away a year ago in March and because of COVID hasn’t been able to reconcile her mother’s death and go over there. In the community we try to do our part by wearing masks when it’s necessary inside businesses and try to support local businesses and healthcare workers by doing the right things.”
In the lead-up to the rally, Lansdall Pharmacy announced that it would be closing its doors on Saturday.
“This is being done to protect the safety and security of our staff and community and is a direct result of the planned anti-mask and anti-science protest planned for the community,” said Jason Williams, pharmacist and operator. “As a provider of health care we strongly disagree with this planned mass gathering. There is potential for our community being inundated by individuals from other communities as well as local residents who choose not to follow public health guidelines. On a daily basis we assist individuals at high risk of COVID-19 complications.
“We strongly recommend all residents stay home for the duration of this event. We have seen first-hand in our pharmacy a sharp increase of individuals with confirmed or suspected COVID-19 whom are now quarantining because they are ill or have been in close contact with someone who has a confirmed or suspected case of COVID-19. This is not the time for any type of mass gathering in our community. Please stay home and stay safe.”
Michelle McKenzie, the Mayor of Maple Creek, had also issued a statement on the Town’s Facebook page, urging people to stay away from the weekend event, although she accepted freedom of protest was a fundamental right.
McKenzie said the rally was being held in a public place and no permit was required.
Meanwhile, the Maple Creek United Church held a prayer for the community at 11am on Saturday.
“We are experiencing a number of challenges in Maple Creek and our surrounding area at this time, many of which have been widely reported in the media,” said Rev. Michele Rowe, United Church pastor.
She said the church wanted to provide a positive and safe space in which people could gather for prayer and support.