A day full of smiles

It was a day when Maple Creek smiled again.
When the streets and the Jasper Centre grounds were filled with the sounds of children having fun, when dunk tank volunteers got soaked to raise funds for a new swimming pool, and Michelle McKenzie, the Mayor, became a sitting target for pie-throwers. Husband, Jerry, and daughter, Telysia, were among those who covered her face and hair in cream and crust … all for the pool fund cause.
“I think we raised about $200,” said McKenzie. “Now I’m sticky all over and need to have a shower, but only after I’ve visited the beer gardens at the Jasper.”
After 18 months of social distancing and mask-wearing – two COVID-19 restrictions finally lifted on July 11 – the community was in the mood for a big party. And that’s what it got with the first “Celebrate with Maple Creek” festival, organized primarily by Savannah Mass, communications and tourism manager for the Town, with support from the Chamber of Commerce and Jasper Centre.
Streams of people from Maple Creek came out to enjoy everything from a parade, children’s games and wagon rides to a flea market, sidewalk sales, cowboy poetry, live music, and the comic movie, “The Apple Dumpling Gang”.
They were joined by many fun-seekers from outside the community, among them Scotty Linton, from Medicine Hat, who came with wife, Brenda, and father-in-law, Robert.
Although they have lived in the Hat for years, Scotty and Brenda have never explored Maple Creek. Saturday was a good day to put that right.
“We wanted to show our support,” said Scotty.
“I think a lot of people just want to get out and about.
“It’s great to have something to celebrate at last.”
Scotty was particularly looking forward to buying Saskatchewan honey and visiting Cowtown Kids, Toy & Candy, a store he has heard a lot of good things about.
The festivities began early with a pancake breakfast at the C.M. Glascock Building followed by a parade that started in 5th Avenue and wended its way along Jasper Street, Pacific Avenue and Sidney Street.
One of the floats was from the swimming pool committee. Those on board were equipped with spray guns.
“We need a pool, we need a pool, we need a pool …,” was the chant.
Jane Filthaut, who helps run the Broken Spoke Fine Art Gallery with husband, Blaine, was impressed with the parade.
“I thought it was awesome,” she said. “There was lots of candy and kids had a blast. Everybody was happy and waving.”
She added: “Maple Creek is coming back to life.”
Maple Creek resident Alvina Mason agreed.
“It was a great parade,” she said, pointing out how much she liked the little horse.
Alvina said she picked up some candy and gave it her great grandson, Grady.
Another local resident, a former forestry renewal worker in Prince Albert who retired to Maple Creek, said the parade had been better than he thought it would be.
“The organizers deserve credit for putting a lot of time into it,” he said.
Asked whether it had been a good decision to retire in Maple Creek, he said: “Overall, yes. I really enjoy the fishing in the area.”
Early afternoon proved the busiest period, with a lot of activity centre on the Jasper Cultural & Historical Centre. The grounds teemed with children enjoying bungee jumping, a bouncy castle, and a rock-climbing wall, while for adults, there was a giant flea market – a terrific place to browse or pick up a bargain or two. Inside the centre, a book sale in the Heritage Gallery attracted plenty of interest.
Unsurprisingly, the dunk tank fundraiser outside the old fire hall proved a big draw, with Colten Sustrate, Rod Williams, Jory Elliot, Dale Udal, and Kristin Weiss volunteering to sit on the collapsing seat, the dunking mechanism triggered by a ball striking a target.
The fundraiser brought in $1,003.10. A further $640 came in from a 50/50, won by Mary-Anne Friday, who donated her $320 back to the pool. It resulted in a grand total of $1,643.10.
By the late afternoon, the crowds had thinned noticeably. Most of the activity was at the main stage between the Post Office and the Bank of Montreal. People relaxed under a tent, or in the Jasper Hotel beer gardens, to enjoy performances by Cheryl Eresman and Friends, followed by Berk Jodain.
The weather had been glorious all day, but, as forecast, rain drops began falling at around 9pm, the scheduled time for the movie in the Cypress Motors parking lot. The venue was hastily changed to the alley behind the Post Office.
For the Mayor, the day had been a big success.
“It was absolutely great to see people out and about in Maple Creek,” she said. “There were a lot of faces I didn’t recognize, so I there many people came from outside the community. There were also a lot of faces I did recognize, so we had a good mix of locals and visitors.”
McKenzie said one of the best sights were the smiles on children’s mask-less faces.
“It was good to see kids playing,” she said. “Businesses also seemed happy. It was a busy day.”
Ron Janzen, from the Jasper Hotel, said the beer gardens had proved extremely popular.
“We did really well,” he said.
Mass said she was delighted with how the day went. The three blocks devoted to the festival had allowed for plenty of space.
“It never felt too crowded,” she said, adding: “I think the community needed an event like this. I am very happy with how it turned out. “ 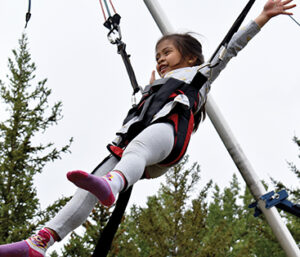 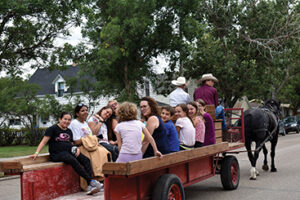