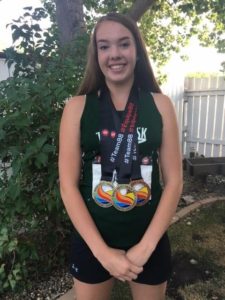 Sarah Watson, 17, with her medals after winning Gold in the Triple Jump, Bronze in the high jump, Gold in the 4 x 100 relay along with her teammates.

It was her first go at the  competition but Sarah Watson, 17, didn’t fail to impress.
In just her first day competing, Sarah was able to take home both gold and bronze for Team Saskatchewan in the high jump and triple jump at the North American Indigenous Games, held in Toronto, July 16-23.

Being that it was held on such a large stage, Watson really felt the weight of putting on a great display. But it was her teams’ performance that gave her encouragement.
“I really felt the pressure, and I was super nervous, but I saw that we had a good team and how well we were competing so I felt more confident in myself,” she said.

The initial feeling of winning gold was something she could not put into words.
“I was so happy because I wasn’t jumping as good as I normally do so I was really down on myself, but then I found out I made top-eight which means you got another three jumps so I talked to my coach and she said I could do it, which put me in the zone.”

She said she really felt the support of the hometown behind her and they were always on her mind.
“My mom posted videos and every hour I had to go and react to all the comments that people left on it and how many people texted me and told me good luck and that I was doing great.”
Watson was not only representing Team Saskatchewan and her hometown of Maple Creek but also her Indigenous tribe, Keeseekoose, one of many others that comprise the whole team.

Watson also won Gold in the 4 x 100 relay along with her teammates and placed seventh in long jump. She said the team was a super close-knit group that played the vital role in how everyone performed.
“We all got along. When we ran the relay, the last person to cross the line the team would run up to them and congratulate them, and we were all very super supportive of each other. We all still talk and keep in contact.”

For Sarah, her ambitions don’t just live on the track. She plans to attend university in the States after graduating high-school and getting involved in volleyball at a university level, with possible Olympic hopes in mind.

Overall, Team Saskatchewan performed very well. They placed second in the overall medal standings, just missing out on first place which was occupied by British Columbia with a total of 179 medals. Team Saskatchewan wasn’t too far off with 166 medals, 65 of which were gold. The last time Team Saskatchewan took home the most medals was back in 2008 when the competition was held in Cowichan, B.C.