Everything is relative … Maple Creek & the Canadian Finals Rodeo

The 45th annual Canadian Finals Rodeo runs from Oct 30 – Nov 4. Sanctioned by the Canadian Professional Rodeo Association, for the first time ever, the Canadian championships will be decided in Westerner Park at Red Deer, Alta. The previous 44 versions of the CFR were held in Edmonton and over the years, Maple Creek and area has been well represented. So, just for fun, we present our pre-CFR build-up — from a Maple Creek perspective.

To start this off — what does “Skimp” and Dorothy Parsonage and Mary Elliott have in common? Well, turns out that “Skimp,” Dorothy and Mary all get their mail at Maple Creek and have a grandson entered in this year’s six-round showdown as the season leader. Jared Parsonage leads all bull riders and Clay Elliott is the number one gunner in the saddle bronc competition.

There’s plenty of district connections in the production end too. The rodeo will be live streamed on FloRodeo and if you own a computer, you can sign up. That broadcast will feature Piapot’s seven-time CPRA Announcer of the Year, Joe Braniff, who will keep you well informed. Joe’s co-host is Bob and Peggy Needham’s nephew, Tim Edge.

The two pick up men were chosen by the contestants, and Jamie Packard’s uncle, Gary Rempel, will be there for his record-extending 20th year. He’ll be partnered with Wayne Resch’s younger brother, Jason Resch.

Bullfighters were also voted in and Scott Waye is one of three that will be protecting the bull riders. His wife, Julia, can trace her lineage all the way back to N.W.M.P. member and pioneer Cypress Hills rancher, David White. 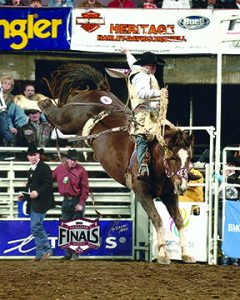 Once again, Kylie Parsonage’s brother, Lane Peterson, received the call to be a judge at this year’s showcase. In bygone years, their mother, Brenda, served as CFR secretary many times.

Over the years, Maple Creek’s contribution to the rough stock pens has certainly raised the tone of the town. Local Derek “Dirty” Moorehead raised a bull named Glass Tiger that was invited to the rodeo, and Hall of Fame bucking horses like High Chaparral, raised by Mike Shapley and Coyote, raised by Bob and Dixie Black, have made their mark and put a lot of jingle in the jeans of the nation’s top cowboys. Another bucking horse with Maple Creek connections — and whose influence is still being felt in the chutes today — was a mare named Tiny Bubbles. She was purchased by Calgary Stampede from Cowtown Rodeo Company (Bob Black, Bill Gilchrist and Lawrence Lundberg). Her descendants, Soap Bubbles and Umber Bubbles, have both been selected to buck at the 2018 CFR.

At the “timey end” of the arena, who can forget the photo of Daryl Brost holding the reins of three horses he trained that carried their new owners to the big show? This year pay close attention to the barrel racing, and watch 2017 Rookie & Permit of the Year winner, Diane Skocdopole, smoke the cloverleaf pattern on her mare that she calls Sonic, sired by RNJ Heckofafrenchman, aka Hector, a stud now owned by William and Donna Beierbach.

We would be remiss if we neglected the rodeo royalty from the short grass country. For the first half of the 2018 CFR, the festivities will be presided over by the outgoing queen, 2018 Miss Rodeo Canada Brittney Chomistek, whose grandparents, Emil and Angie, ranch north of Tompkins. Brittney is following in the boot prints of 1983 MRC Kathy Cornelson, daughter of Wilf and Jean Cornelson, who ran the Arena pasture for years, and 2005 MRC Christa Lawrence, daughter of Eric and Ann Lawrence and the granddaughter of centenarian Joan Lawrence. The Lawrence family has ranched along Fish Creek for over a century.

Even the glossy program has a Cowtown connection. With today’s technology, it was all put together by the veteran editor, Terri Mason, who also ramrods Canadian Cowboy Country magazine from her tiny office on Sidney Street. For the first time, the CFR Souvenir Program will be available as a free download for FloRodeo subscribers.

And that, folks, is how everything is relative between Maple Creek & the Canadian Finals Rodeo.