“Great ambassadors for our community”

You could call them Maple Creek’s Magnificent Eight.

Seven boys and one girl have been creating a stir on the provincial darts scene, not only with their throwing, but also with outstanding sportsmanship.

Their latest impressive performance came at the Saskatchewan Dart Association Youth Provincial Play Down at the Army & Navy Club in Saskatoon on the February 16-17 weekend.

“They went toe-to-toe with the best in the province,” said Sheppard. “We are super proud of these kids. They played extremely well and were wonderful ambassadors for Maple Creek. Their maturity level is really high.”

“They were absolutely awesome,” said Kmiecik. “It was a great experience for them and they made a lot of new friends. They surpassed our expectations.”

The play down featured 20 players: five girls, 14 junior boys and one senior boy. As well as Maple Creek, Saskatoon and Nipawin were also represented.

Over the two days players competed in 39 one-on-one games.

“Five of our boys finished within the top 10,” said Sheppard. “They made coaches and parents very proud. 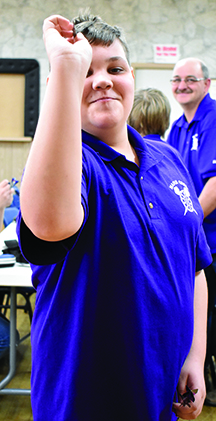 Matthew Sheppard with Dad Jamie in the background.
PHOTO BY MARCUS DAY

“Rob and I just stood and watched while they played. We chalked up the games, keeping the scores.”

“We weren’t allowed to coach during the games,” said Kmiecik. “We only coached in between games.”

In the Junior Girls section, Kya gained second place after edging out Shaukeena McKay of Nipawin and will now be moving to the national tournament in Saskatoon in May. Meanwhile, Matthew has earned a spot as an alternate for the Junior Boys for the nationals.

To top off the weekend, Kya and Gabe won sportsmanship awards.

For the coaches the tournament was a marker of the progress of their young charges since the Maple Creek Youth Darts League – which is affiliated to the Saskatchewan Darts Association – started two years ago.

“This is the first year they have been competing,” said Sheppard.

“They have come a long way just this year. It is amazing how they have excelled.

“They have now been in five tournaments, but this was the first time they have played on their own.”

The players can now look forward to another big tournament in Medicine Hat at the end of April: The Silver Cup. It will given them a chance to get world ranking points.

The youth darts club meets every Sunday, between 1pm and 4pm, in the Normandy Room at the Legion where there are seven mounted boards. The junior category is for those aged 9 to 15; seniors are aged 16 to 19, although Maple Creek doesn’t have anyone in this category yet. The four volunteer coaches are Sheppard, Kmiecik, Dan Ryerson (head) and Lester Nickel (assistant).

Sheppard and Kmiecik say darts is a great game for testing concentration and math skills.

“You have to think on the fly, and add and subtract really quickly,” said Sheppard, who grew up in Newfoundland and has played darts for 29 years. “You also need good eye/hand co-ordination.

“It’s a lot of fun. It’s good to see kids put away their cellphones and get away from video games for a while and enjoy some social interaction.”

Kmiecik has been playing darts for about 20 years.

“It’s a very exciting game,” he said. “It’s also very inexpensive when you compare it to other sports like hockey and soccer.”

“No experience is necessary,” said Kmiecik. “You can just show up at the Legion. We can supply darts. The league also supplies shirts.”