NEWS-TIMES PHOTO KATE WINQUIST Blake Fournier had the biggest hit of the game for the Mohawks with an inside-the-park grand slam.

The Maple Creek Mohawks started their SaskAlta baseball season with a couple of losses last week. The team travelled to Medicine Hat on Wednesday and were defeated 8-1 by the Vipers.

Talon Kunkol and Cody Florkowski provided the pitching for the Mohawks. Cole Schreiber pitched a complete game, 12 strikeout performance for the Vipers and that was the difference. Keegan Delorme and Kirk Orr provided the only offence for the Hawks.

The Mohawks home opener was on Thursday, May 16 versus the Shaunavon Badgers in less than ideal weather conditions. It was quite cool with a strong wind. When the dust settled, it was the Badgers coming away with a 16-8 victory.

Starting pitcher for the Mohawks was Keegan Delorme. Things started out on a positive note as he struck out Kirk Amon on three pitches. The next batter was Darryl Rhodes who was hit by a pitch. Rhodes stole second base and reached third on a throwing error. Delorme then plunked Dyson Stevenson with an errant throw. Stevenson stole second base to put runners on second and third with only one out. Veteran Badger, Tanner Tetrault, singled up the middle to drive in the first two runs of the game. Alex Andres drove a solid single to right to put runners on the corners. A passed ball by Mohawk catcher Blake Fournier allowed Tetrault to score from third base. Andres moved to second on the play and then stole third base. Jordi Thomas came through with an RBI single. The hits kept coming for the Badgers with singles from Cody Tetrault and Kevin Hardin. Hardin’s single brought in Thomas with the fifth Badger run of the inning. Delorme settled down, striking out Kyle Dordu and getting Kirk Amon to fly out to end the top half of the inning, leaving two runners on base. 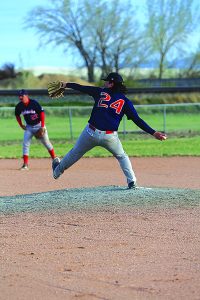 NEWS-TIMES PHOTO KATE WINQUIST
Keegan Delorme started the game on the mound for the Mohawks.

Delorme lead off the bottom of the second inning with a single to right centre on the first pitch he saw from Badger pitcher Alex Andres. Blake Fournier was next up and couldn’t advance the runner, striking out. A passed ball allowed Delorme to reach second base. Cody Florkowski walked putting runners on first and second, setting up the first run of the game courtesy of Kirk Orr who singled. Kyle Mason was next up for the Mohawks and got a bit unlucky lining out to the first baseman, Stevenson, who stepped on the bag to double up Orr to end the inning. The score after one complete was 5-1 for the Badgers.

After sending ten batters to the plate in the first inning, the Badgers were ready for more. Darryl Rhodes was hit by a pitch once again and advanced to second on a single to left field by Stevenson. Another passed ball moved the runners up 90 feet. Tanner Tetrault lined a hard fly ball to centre field, but right at Ryan Bayne, who recorded the first out. Manager Al Fournier decided he’d seen enough from Delorme and made a pitching change, bringing in Cody Florkowski in relief. Florkowski struck out Andres, but gave up a two-run double to Jordi Thomas. Cody Tetrault struck out to end the Badgers half of the inning.

Down 7-1, the Hawks knew they had to get something going. Tristan Sulz hustled down the first baseline forcing an errant throw which allowed him to reach second. Ty Reisdorf sent a fly ball to right field that eluded Jordi Thomas. Graham Gordon walked to load the bases. Ryan Bayne walked to bring in the Mohawks second run. After Keegan Delorme struck out, Blake Fournier came to the plate. Fournier pounded the ball between the outfielders and electrified his teammates with an inside-the-park grand slam, getting the Hawks to within one run. Florkowski was hit by a pitch and the Kirk Orr cracked an RBI triple and then scored on a throwing error. Mason popped up to second base for the second out. Tristan Sulz shot a lazy single to centre before Reisdorf struck out to end the inning. After two full innings, the Mohawks took a 8-7 lead.

Shaunavon would score 2 runs in their half of the third inning after a triple by Stevenson scored Hardin who reached on a passed ball strike out and Amon who walked.

Maple Creek was unable to score in their half of the third, leaving a couple of runners on base. Graham Gordon and Blake Fournier each walked, but Andres was able to strike out Bayne, Delorme and Florkowski to end any threat.

Badger pitcher Alex Andres showed his strength to open up the fourth inning, powering a long drive over the right field fence for a home run. Jordi Thomas singled followed by a Cody Tetrault double. Kevin Hardin was credited with an RBI after an infield single. Dordu lined out and Florkowski struck out Amon. With two away, Darryl Rhodes added to the Badgers lead, singling in Tetrault. Stevenson grounded into a force out at second to end the damage.

With the score 12-8, the Badgers brought in Tanner Tetrault in relief of Andres. The move paid off for the Badgers as the Hawks were unable to get any offence going with three straight outs. A diving catch by centre fielder Hardin was the defensive highlight of the game, robbing Kyle Mason of a sure hit.

Some sloppy defensive play cost the Mohawks another couple of runs in the fifth. After Tanner Tetrault lined out, Alex Andres continued his strong game with a hard single to right that eluded Kirk Orr. Andres stole second base. Florkowski attempted to pick him off, but overthrough Delorme who was covering and Andres scored all the way from second on the error. Florkowski got out of the inning by retiring Thomas and Tetrault.

Josh Dawson was called upon to pinch hit for Reisdorf to start the bottom half of the fifth, but grounded out to short. Graham Gordon hit a hard grounded, but right to the third baseman, Amon, who easily through him out. Blake Sanderson pinch hit for Bayne and came through with a triple, but was stranded on third base after Delorme popped up to short.

Hardin doubled for the Badgers to start the sixth. Pinch hitter, Derek Thomas, dribbled a ground out to the pitcher for the first out. Amon was hit by a pitch which put runners at first and second. Darryl Rhodes drove in a run with an single. After Dyson Stevenson walked, Amon was able to score another run on a passed ball. The defensive struggles continued for the Hawks with a throwing error from Fournier, allowing Rhodes to score Shaunavon’s 16th run of the game. Tetrault and Andreas both were retired to stop the bleeding.

The Mohawks ran out of steam and were retired in order in the bottom of the sixth to make the final Shaunavon 16 – Maple Creek 8.

Next action for the Mohawks is Tuesday, May 21 when they travel to Swift Current to battle the Yardgoats. Game time is 6:30 PM at Mitchell Field.

The next home game will be May 27 against the Richmound Rockets. 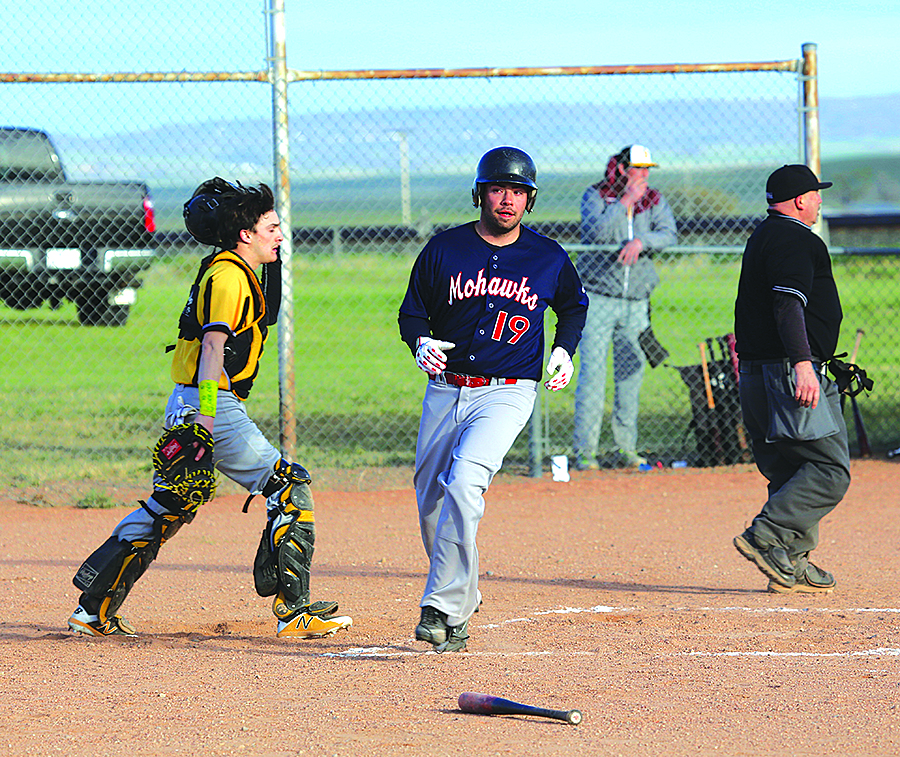