A relaxed atmosphere, meeting old friends, making new ones, an arena encouraging intimacy between audience and performers, scenic surroundings, well-bred livestock, benefits to business, chatting in the beer gardens …
To organizers, spectators, businesses – and no doubt competitors – there are multiple reasons why Consul’s Reno Rodeo feels special.
Quinn Zilkie, vice-president of the Consul Ag Society, says he loves to witness so much happiness in and around the arena, particularly on children’s faces.
“It’s about the kids. When they are mutton busting or roping, they have these big smiles – that’s all I need. Afterwards, they all get a prize. It’s fun to be out here watching.”
The 13th edition of the village’s premier event, which bills itself as the “biggest little rodeo in the west”, took place over Saturday and Sunday. It was blistering hot on both days, with dust in the air.
After the 2020 rodeo was cancelled because of COVID-19, the Ag Society pledged to do its utmost to make this year’s event a huge success.
Judging by those who spoke to the News-Times on Saturday, it did not disappoint.
“It’s nice to be here,” said Ed Sandor, who arrived with his grandchildren.  “It’s a great rodeo and it’s good to see everybody enjoying themselves.
As many as 375 contestants took part, tying a record achieved in 2016 or 2017.
Proceedings started shortly after 2pm with the Kids Rodeo. Normally, it attracts 80-90 participants, even 100. This year numbers were down to about 40.
“It could be that kids are growing up or kids are going somewhere else,” said Zilkie.
There were plenty of “oohs and ahhs” and good-natured laughter as children tried their hands at a variety of challenges: Pee Wee barrels, junior barrels, stick horse barrels, dummy roping and mutton busting. There was also a chuckwagon race.
Cellphone-brandishing parents stood atop the bleachers or knelt by the perimeter fencing to grab the best possible pictures of the action.
The break between the children’s and Canadian Cowboys Association rodeos saw a steady stream of people enter the grounds. Some took advantage of the pause to get a bite to eat from the “Flip Flop” trailer: cheese burgers, taco in a bag, chicken bacon ranch wrap, poutine, home-cut fries, buffalo chicken wrap and hots dogs were among the options.
A nearby booth run by Linda Seifert and her daughter, Nicole McNaughton, also saw brisk business, with ice-cream and slushies proving particularly popular.
“It has been busy today,” she said. “It’s hot and a lot of kids want ice-cream.”
By the time the CCA event kicked off at 5.30pm with the grand entry, singing of “O Canada”, and Nate Tully’s reciting of the Cowboy Prayer, the bleachers were full.
As Zilkie had predicted, it seemed that after the lifting of COVID restrictions people were determined to enjoy their freedom.
“COVID hit us pretty hard,” he said. “The last rodeo was in 2019, so I think people just wanted to come out and enjoy themselves.”
Events included bareback, novice saddle bronc, tie down roping, junior steer riding, steer wrestling, ladies barrel race, junior barrel race, saddle bronchi, team roping, ladies breakaway roping, and bull riding, which on both days provided a fitting, dramatic climax as the light began to fade.
Contestants came from all over Saskatchewan – Maple Creek was well represented – and provinces like Alberta, Nova Scotia, Manitoba and British Columbia. They provided scintillating action called by announcer Mike LaBelle, who continually urged the crowd to spur on young cowboys and cowgirls, even when things went awry.
“Don’t let the cowboy leave the arena with his chin on his chest,” was a typical comment.
McNaughton, who lives in Medicine Hat, comest to the rodeo every year, seeing it as an important community event.
“It’s a time for everybody in the community to come together, especially this year when we haven’t been able to gather for a couple of years. There are always lots of people from all across southern Saskatchewan and Alberta who come; it draws a very large crowd every year. It’s good business for the community, so I think it’s super important.”
McNaughton said she and her mom have attended every year, selling ice-cream, slushies and home-made pies.
“The rodeo grew quite a bit in the last few years, before COVID,” she said.
Asked why the rodeo was so special, she said: “I like coming home for it. I like the atmosphere, seeing lots of people, and hanging out with friends.”
Sandor, who exhibited his family’s bright yellow 1955 Chev (farm truck) at last month’s Reno Rodders Car Club show in Consul, said he would normally have attended the Super Run in Red Deer, Alberta. But as this year’s car spectacle was cancelled because of COVID, he decided to go to the rodeo. It turned out to be a good decision.
Zilkie, who was born and raised in the area, said the rodeo was very important to Consul. With the slo-pitch weekend, it was the biggest event on the village’s calendar.
“The atmosphere and the friendships make it special,” he said. “You meet more people ever year. It’s always cool to come back and meet them here again. The contestants just like it, they like the stock, and like the arena, and everything that goes with it.”
Reno Rodeo and Ag Society uses money raised to support local initiatives such as the Consul Rink, community halls, daycare, and Maple Creek hospital fund. 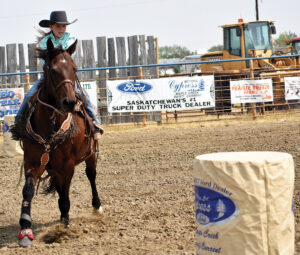 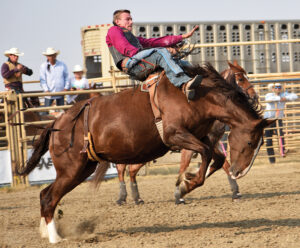 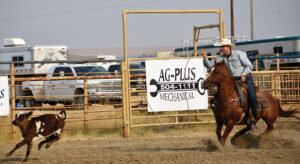 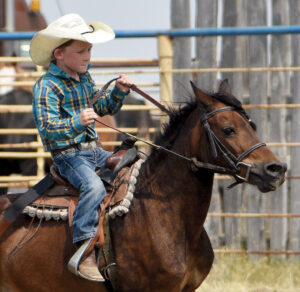 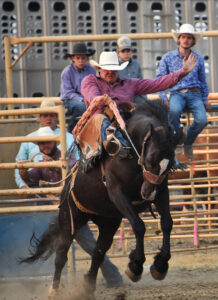 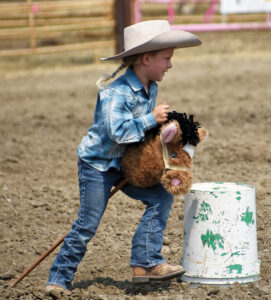 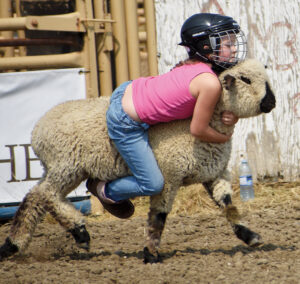 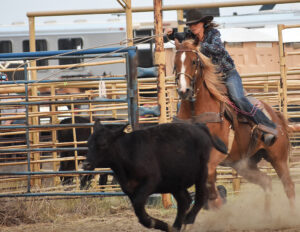 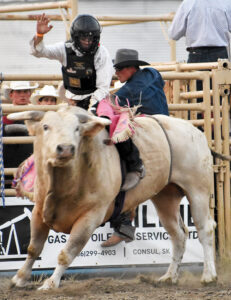