It was an age of cloche hats, flat caps, descending waistlines and rising hemlines in women’s dresses.
It was also an age when bootleggers, and gangsters like Al “Scarface” Capone captured public attention, entering popular culture and mythology.
In Maple Creek, the roarin’ 20s roared back into fashion on Saturday when the annual Ladies Bonspiel came to a glorious end.
Most of the party clothing appeared for the evening banquet upstairs at the Maple Creek Curling Club.
One curling team, however, couldn’t wait until then to get dressed up.
Amy Schneider, Olivia Bircham, Amanda Farnsworth, and Stacey Domolewski came out on the ice like cast members in “Peaky Blinders”, the British period crime drama following the exploits of the Peaky Blinders gang in the aftermath of the First World War.
They cut a dash in suits and heavy overcoats, ranging from charcoal grey to black, and newsboy caps and Fedoras.
It was easy to imagine them carrying Al Capone submachine guns instead of brushes.
Their costumes encapsulated the spirit of the event, which was as much about socializing as competing.
Eleven four-person teams took part in the four-day bonspiel, which started on Wednesday. The players, which included a team of high-school students, mostly came from Maple Creek and the surrounding areas, such as Piapot and Irvine.
One or two came from farther afield: Redcliff and Medicine Hat. Play featured eight end games and a five-rock rule; tied games after eight ends were broken by playing an extra end.
Saturday evening saw the players enjoy a chicken souvlaki/rice/Greek salad banquet, followed by a presentation ceremony.
Four teams were awarded $100 Chamber of Commerce gift certificates. Event sponsors were Lifestyle Financial Services, Murray Chev Buick GMC, Drury Lane Fashions, and MNP.
Other attractions included a loonie auction, with five or six items to bid on, door prizes, and a hidden Calcutta.

Of course, there was plenty of upbeat dance music in the background … not forgetting the Charleston, the dance most associated with the 1920s.
Two of the leading bonspiel organizers are Johanna Koch and Monique Bonneau.
“We’ve had a lot of fun over the last few days,” said Koch.
Koch recalled a time back in the 1980s and 1990s when the bonspiel attracted up to 40 teams.
Having a theme heightens the entertainment. Past themes have included “Welcome to the Jungle” and “The Olympics”.
The curling club says a 2023 theme is already being considered … Country Music Stars. Perhaps a bit of star power will draw more teams to the bonspiel. 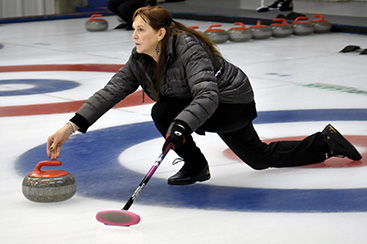