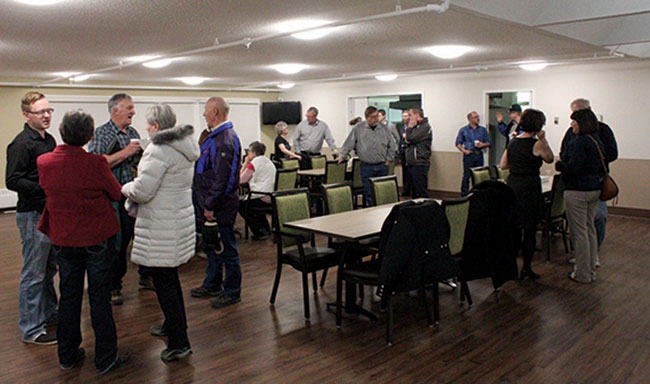 A couple dozen officials, including members of Maple Creek Town Council and MLA Doug Steele attended a preview of the soon to be opened Cypress Lodge Care Home the night before its Jan. 21 open house. NEWS PHOTO SEAN MCINTOSH

The Cypress Lodge Care Home gave people a chance to see the building before it officially opens.

On Jan. 21, around 400 people attended an open house at the building on Hwy. 21 across from the hospital.

Finally being able to show off the work that was put into the building was something Jeanie Culligan, one of the owners, alongside Jason Roberts, was looking forward to, she said.

“We’re delighted and everyone seems very happy with the hard work and the vision that we had,” she said.

The Town of Maple Creek was a great help in getting the building to where it is, said Roberts.

“Without them we wouldn’t be at the stage we’re at right now,” he said.

Both Culligan and Roberts said the resident kitchen is the part of the building that makes them most proud.

“We feel it’s going to be a room that’s utilized often, especially with a door into the backyard,” said Roberts.

It’s hoped the building will be officially open for residents within a week, Roberts added.

“As soon as we’re licensed the doors will be open,” he said.

More than 20 people  are ready to move into Cypress Lodge once the licensing is complete.

One of the attendees at the open house was Jonas Abramson, who lives just west of Maple Creek.

“I like the brightness. You don’t want a place that’s dark and gloomy. It’s really nice in here,” he said.

One part of the building Abramson really liked was historical photos hanging on the wall near the entrance.

“The old pictures on the wall are great. There’s a lot of history here in town, so it’s great to take it all in,” he added.

The photos were provided by the Jasper Cultural and Historical Centre.

Another attendee of the open house, Maple Creek resident Wally Weber, said it was a night-and-day difference when compared to the former Cypress Lodge Nursing Home.

“I used to have a good friend here before they changed everything and it’s just incredible,” said Weber.

Like Abramson, Weber noted the brightness of the building was a big plus. She also praised the new floors and railings.

“They did an excellent job. It’s beautiful in here,” she said.

The night before, Jan. 20, local officials were given a tour of the building. One of those officials was Cypress Hills MLA Doug Steele. The vibe inside the building was “amazing,” he said.

“It’s an opportunity for people in the later stage in life to stay in this community and still feel that homey atmosphere,” said Steele.

Maple Creek Mayor Barry Rudd attended the Jan. 20 preview as well. It was great seeing the building looking the way it did, he said.

“It warms your heart,” said Rudd. “They’ve put a lot of blood, sweat and tears in this place over the past year.”

Culligan and Roberts have been working on the building since January of last year, with Roberts only having nine days off, Rudd said.