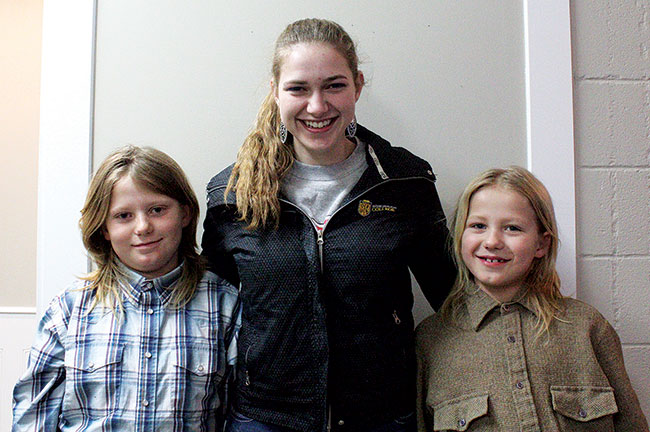 Three Maple Creek residents and Bear Creek 4-H Club members are growing their hair to raise money for a good cause.

Jordana Jans, 18, and her two brothers, nine-year-old Taylor and seven-year-old Riley, are aiming to raise $5,000 for the Arnal Boys’ Memorial Bursary for Young Farmers.

Once $5,000 is raised they will cut off their hair and donate it to 360 Hair, which makes wigs for cancer patients, with anyone 19 or younger getting a wig for free.

They decided to grow their hair out for the cause in August, but they had long hair before that, so it’s been more than a few months worth of growth.

The bursary was created in honour of three boys who died between 2008 and 2014. In 2014, six years after Blake Arnal was killed in an ATV accident at the age of 16, his brothers Sean, 16, and Lyndon, 10, died in a tragic farming accident.

Seeing young people give to the bursary means a lot for the Arnal boys’ sister, Chantal Henderson.

“They’re just so generous,” said Henderson. “It makes you proud there are youth like that in the community and being raised with values like that.”

As one of the directors of the bursary, Henderson says it’s more typical for adults or businesses to donate to the Young Farmers bursary. When Jordana, Riley and Taylor Jans approached them with the idea, Henderson said she was overwhelmed.

“For a group of kids to believe in the cause that much and want to donate back to the bursary after they’ve received from it – I don’t even know if there’s a word to describe it,” she said.

Taylor Jans was a recipient of the bursary last year, but that wasn’t the only reason he wanted to give back.

“They were my friends,” Taylor Jans said of the Arnal boys.

The Arnals were members of the same 4-H Club.

So far, the three Jans siblings have raised $1,500. In addition to raising money through donations for growing their hair out, they are selling baked goods and Jordana Jans is putting on musical performances.

Jordana Jans has been planning on cutting her hair short for some time, but her mother, Dana Vos, suggested she cut it off for a cause.

“We were really close friends with them,” said Jordana Jans. “We felt it was a fitting way to keep what we were doing within the community because the bursary still goes out to students within the Chinook School Division.”

Their hair will officially be cut on Feb. 25 in Eastend at a fundraiser supper, auction and dance.

If you would like to donate to the Arnal Boys’ Memorial Bursary you can send money directly to the bursary at Box 2097, Swift Current, Sask., S9H 4V1 with a note saying “Jo, Tay and Ri Haircuts”. You can also mail it to Jordana Jans at Box 1474, Maple Creek, Sask., S0N 1N0.