Still playing the keys at 103 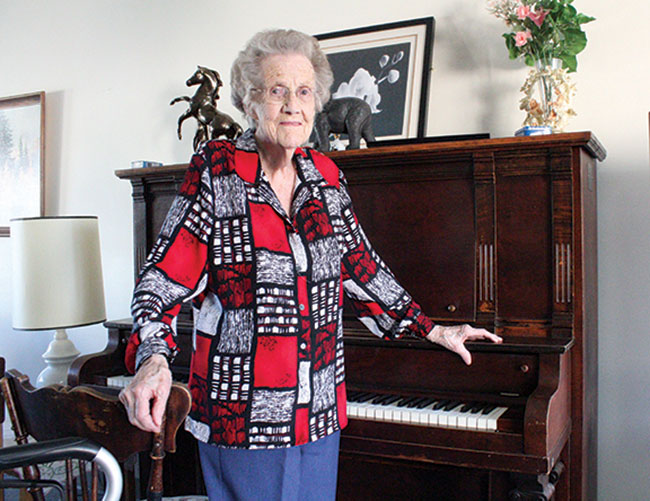 Hazel Foster, a resident at South View Manor on Highway 21 in Maple Creek, still actively plays the piano at 103 years old. A video of her playing can be found on Maple Creek News' Facebook page. NEWS PHOTO SEAN MCINTOSH

At nearly 104 years young, Hazel Foster is still showing off her musical talents.

As a resident at South View Manor in Maple Creek, Foster, 103, has been playing the piano, much to the joy of the others living in the building.

“I’m just thrilled that she can do it at her age,” said Helen O’Donnell.

When O’Donnell moved into the building in June, she was very impressed with Foster – not only in her ability to play the piano, but also by the energy she brings to the Manor despite being 103.

Walking down the hallways with Foster, O’Donnell finds herself being too slow for Foster.

“She’s faster than I am,” she said with a laugh.

Foster says she hasn’t been able to play for some time.

“I haven’t had a piano for many years before I got here,” Foster said.

Foster used to play piano at dances as a part of a bigger band with a violin and other instruments, she said.

Prior to moving to South View, Foster had lived all around Saskatchewan, including in Keystone, Stoney Beach, Pense and most recently Regina.

She birthed three children, one of which currently lives in Maple Creek.

Foster’s youngest daughter Carole Anderson moved to Maple Creek with her husband in 1968, while her mother moved into town just over one year ago.

Foster’s other daughter has passed away and her 80-year-old son lives in Calgary.

Anderson is in awe seeing what her mother is still able to do at her age, she said.

“She is truly amazing,” she said. “She’s been so good since she moved here.

“She doesn’t qualify for a nursing home yet, because she’s so good,” said Anderson.”

Foster will be celebrating her 104th birthday on Feb. 19 with a few family members and residents of South View Manor.

A bigger celebration for her birthday may be held shortly after with family members coming down from Regina, Anderson said.

If you’re interested in seeing a video of Foster playing piano, head over to the Maple Creek News’ Facebook page.