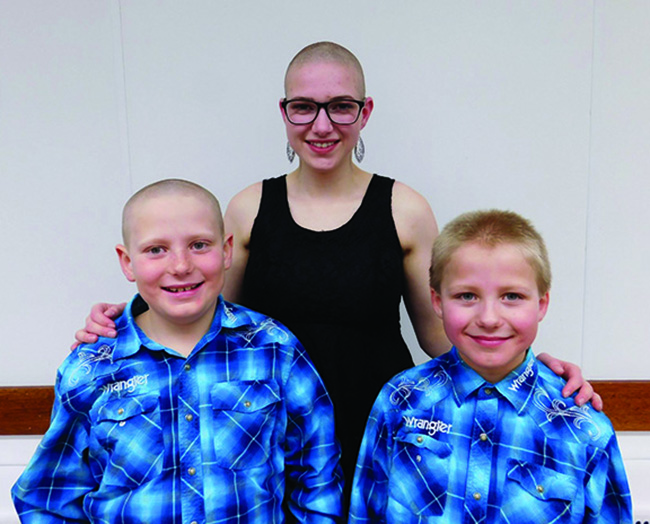 Taylor Jans, Jordana Vos Jans and Riley Jans after getting their hair cut in order to raise money to the Arnal Boys Memorial Bursary. In total, they raised $6,266.80 with their haircuts. In addition Taylor Jans donated a pig which raised $1,000 and Jordana Vos Jans and the band Elektric Mayhem played a free set and the annual supper. SUBMITTED PHOTO

Thousands of dollars were raised in Eastend for the Arnal Boys Memorial Bursary recently.

The annual Arnal Boys Memorial Bursary Supper fundraiser, which included a live auction and dance, brought in more than $17,000 Feb. 25 at Eastend Memorial Hall. Over the entire weekend, about $35,000 was raised.

Well over 100 people attended the event to donate to the bursary and enjoy a nice roast beef meal.

“There truly aren’t words to describe the generosity we’ve received over the last few years,” said Chantal Henderson, director of the bursary and sister of Blake, Sean and Lyndon Arnal, the boys the bursary was created in memory of.

The highest selling item of the night was a rustic painting with the prints of the Arnal boys’ favourite animals. After a back-and-forth bidding war, the painting eventually sold for $2,600.

The deadline for bursary applications passed on March 1. The bursary directors will now get together to decide who will receive money.

“It’s awesome to see kids who want to be involved in agriculture and have the passion for it,” Henderson said.

“They knew Sean and Lyndon so well and it makes me proud to be their sister, knowing the impact they’ve had on people,” Henderson said, tearing up.

The hair they cut off was also donated to 360 Hair, a company that makes wigs for cancer patients.

When the Jans siblings walked through the door, they were just short of their $5,000 goal, with $4,648.80 raised. When they announced they were short a few hundred dollars, people jumped out of their seats with more donations in hand.

Jordana, Taylor and Riley Jans’ mother Dana Vos says she and her husband Bryce Jans couldn’t be more proud of them.

“To show there are good things to come out of horrible situations and to know they’re wanting to give this money with the things that have gone on just brings a lot of joy.”

A lot of people were surprised to see her children actually shave their heads, especially her daughter, Vos said.

“There was a lot of tears of emotions between me and many people in the room. Some of their friends were in shock that they actually shaved their heads,” she said.

Seeing Henderson and other members of the Arnal family’s gratitude for what her children did, warmed her heart, Vos added.

“It’s great to know even though some of their family is no longer here, they can see joy brought to others in the memory of the kids,” she said.

Along with shaving his head, Taylor Jans, a recipient of the bursary last year, donated a pig to the auction, which sold for $1,000. Jordana Vos Jans also performed with the band Elektric Mayhem for free after the supper and auction.

The third annual Arnal Boys Memorial 3-on-3 Hockey Tournament was held on the same weekend at the Eastend Rink Complex. In total, 13 teams participated in the tournament between three groups; runts (12 years old and younger), yearlings (13-18) and crocks (older than 18).

Between all fundraising efforts, including the auction, entry fees for the hockey tournament and the Jans siblings’ haircuts, $35,028 was raised over the weekend.

The Arnal Boys Memorial Bursary was created after three boys and Bear Creek 4-H Club members, Blake, Sean and Lyndon Arnal, all tragically died between 2008 and 2014.