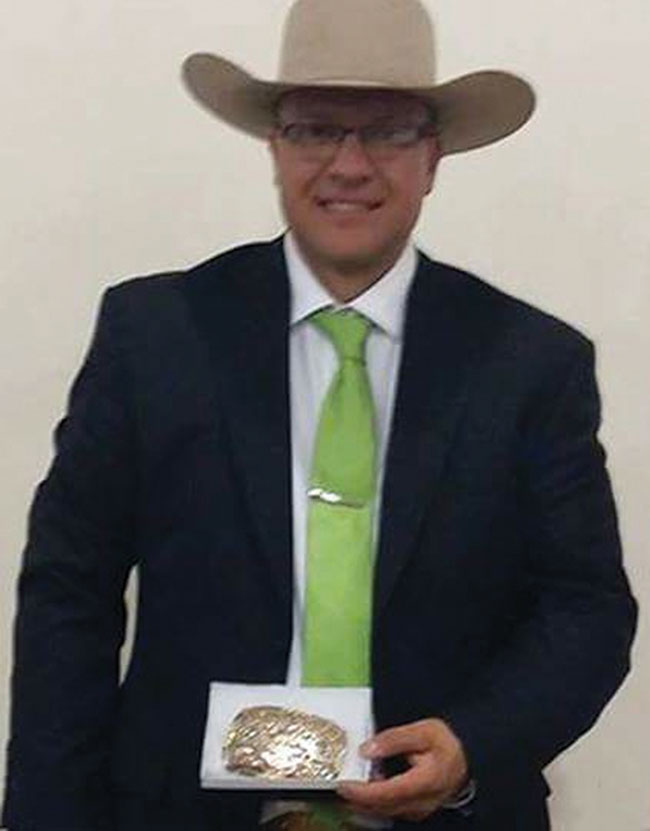 Tyler Cronkhite, an auctioneer with Cowtown Livestock Exchange, won first place at the recent Man/Sask Auctioneer Competition. With a first place spot, Cronkhite will now move on to the national competition in Lethbridge on May 12. SUBMITTED PHOTO

Tyler Cronkhite will be representing Maple Creek, and the provinces of Manitoba and Saskatchewan, at this year’s Livestock Markets Association of Canada (LMAC) Canadian Livestock Auctioneering Championship.

Cronkhite won the Man/Sask Auctioneering Competition in Gladstone, Man. at the end of April, giving him a spot in the national championship.

“We were a little outnumbered but I guess it worked out in my favour,” said Cronkhite.

He said he did well in the first two rounds of the competition, selling both live cattle and a black box item.

Going into the second round of the Man/Sask competition Cronkhite said he was feeling really confident.

“It also helped that I had really nice cattle to sell.”

He didn’t know where he had placed until the banquet after the competition.

Cronkhite says he was surprised to hear his name announced as champion.

“It was pretty exciting,” Cronkhite said about being named winner.

Cronkhite has been an auctioneer for about 10 years, and looks at the competitions as a way to learn more about auctioneering.

It is also a way to get better each year, according to Cronkhite.

“You want to better yourself, and you do that by going to these competitions,” said Cronkhite.

Cronkhite has gotten better during his years in competition.

He says he generally finishes somewhere in the middle of the pack.

He has made the top 10 a number of times, and at last year’s Man/Sask competition – held in Maple Creek – Cronkhite finished in third.

To finish first in the Man/Sask competition shows growth.

With this win Cronkhite is preparing to compete in the national competition.

The Canadian Livestock Auctioneering Championship will be May 12 in Lethbridge.

Cronkhite will be one of 30 competitors competing for the championship title.

“Every year you try to practice and stay sharp,” Cronkhite said.

To prepare for the next level of competition, Cronkhite said he has been practising.

“If you are selling cattle or yearlings, you start at a number and end with a number. Then you just keep practising back and forth, up and down.”

Cronkhite said he hopes to be clear and consistent when selling at the upcoming competition.

Moving on to the national competition, Cronkhite says he wouldn’t have made it without the support of his family.

Specifically, he said his dad has been a great help to him and his career.

“I told him I wanted to be an auctioneer and he sent me to auctioneer school. He has supported me the whole way,” said Cronkhite.

“I think about him every time I get up to sell.”

For those interested the competition will be broadcast live online at http://www.dlms.ca.

“I’m going to try not to be so nervous when I get there. Sometimes all it takes is to take a deep breath and let out the steam.”