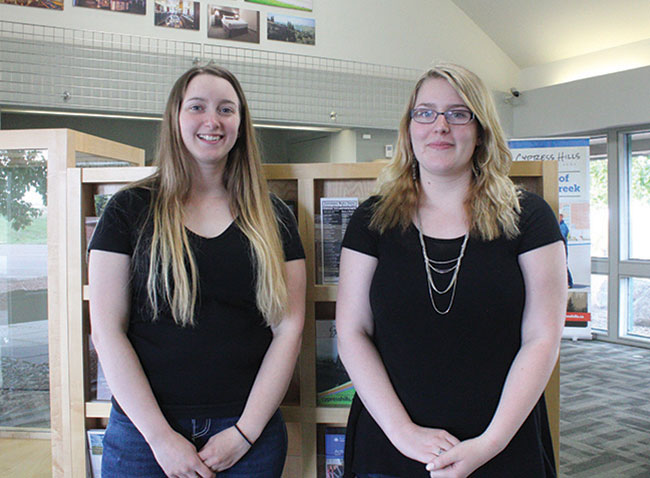 Corey Eirich and Cassie Bauer will be two of the students working at the Visitor Reception Centre on Highway 1 this summer. NEWS PHOTO SEAN MCINTOSH

After a longer road than most years, the Visitor Reception Centre (VRC) on Highway 1 has opened.

The VRC opened on May long weekend with hundreds of people visiting the building between Sat., May 20 and Mon., May 22.

“It was quite busy,” said Community Economic Development Officer Royce Pettyjohn. “Approximately 400 people visited the centre on the weekend which is really quite remarkable.”

The VRC will be open between 9 a.m. and 7 p.m. throughout the summer. There is expected to be a grand opening held some time in early June.

Before the grand opening and ribbon cutting can occur, there are a few more things to do in order to fully set up the building, Pettyjohn said.

“We’ve been scrambling to get everything pulled together and of course not everything is completely set up the way we’re hoping it will be.”

Despite not being completely where they hoped to be, having so many people come through and learn more about Maple Creek and the Cypress Hills Destination Area is a plus.

Pettyjohn says there isn’t too much that needs to get finished; the wall of photographs still needs a bit of work, but most of the wall has been updated. Some new artwork will need to go up as well.

Additionally there are talks with the Cypress Health Region to sell coffee in the VRC.

“That’s proving to be much more challenging than we anticipated, just because the water out there isn’t potable, so we’re trying to figure out how to provide coffee service with water brought in from Maple Creek. But we’ll get that sorted out eventually.”

Additionally the VRC will provide a snack service, showcasing baked goods from businesses in Maple Creek.

It was announced earlier this year Tourism Saskatchewan would be closing the VRC on Highway 1 due to budget cuts from the provincial government and because people plan their vacations online, making the visitor centres less necessary than they once were.

The Town was able to work out a deal with Tourism Sask. where they could take over the operations of the VCR.

“For us it made sense to take it over from Tourism Saskatchewan because if we can capitalize on the traffic and divert some of them into town, either on this trip or future trips, it creates a meaningful impact on the town.”

“They seem to be quite enthusiastic,” Pettyjohn said of the summer students.