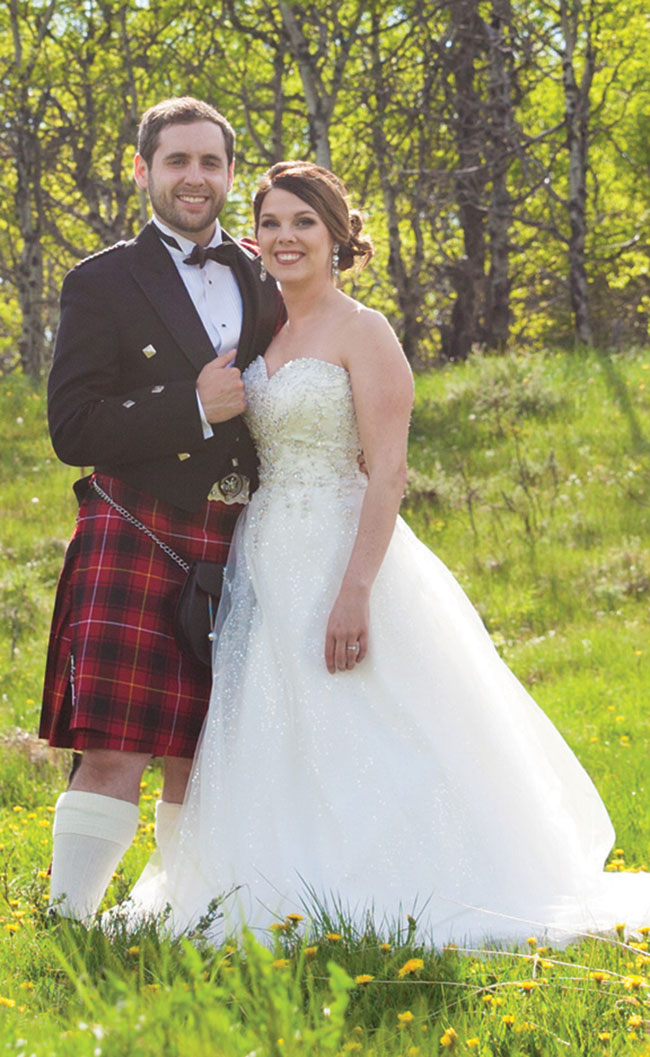 Kim and Calum Martin at their wedding. SUBMITTED PHOTO

The recent power outage in the Southwest almost darkened one couple’s wedding day.

Kim and Calum Martin got married at the Resort at Cypress Hills May 27 – the same day a beaver chewed down a power pole between Maple Creek and Gull Lake causing a 10-hour outage for about 2,500 SaskPower customers.

The wedding ceremony was just ending as the power went out, according to the Martins.

“We actually didn’t know the power went out right away,” Kim Martin said. “The music had quit as we walked out [of the ceremony] and we thought it was just a bit of a glitch.”

After the music cut out, they went outside for pictures, which is when they were told there was no power.

The Resort used generators to keep the DJ table playing music and some lamps lit. There were also candles for extra lighting.

Seeing all the hard work the employees of the Resort at Cypress Hills were putting in added to the experience, the Martins said.

“People worked non-stop and everybody did their job so well and made it so it didn’t affect our day. All their hard work meant everything to us. They made everything go so well when it could not have,” Kim Martin said.

Though the newlyweds are now living north of Regina, they have ties to the area. Kim Martin, formerly Kim Gilbert, grew up in Eastend and Calum Martin worked in Maple Creek for a year.

The couple met in Maple Creek while he was working at the hospital in town. They have known each other for four years now, but have been a couple for three.

Even though they live far away, they come down to Cypress Hills every summer.

“We love it out there. We camp out there every year,” Kim Martin said.

Additionally Kim Martin’s sister and brother had their weddings at the Resort at Cypress Hills.

When they heard a beaver was responsible for the power outage they couldn’t help but laugh, they said.

“We kind of had a hard time believing it was a beaver because that’s the craziest thing we’ve ever heard … It doesn’t sound like something that would happen in real life. But in Canada it can,” Kim Martin said.

“I immediately told my family from Scotland and they just lost it. They said, ‘No way, that’s the most Canadian wedding ever,'” Calum Martin added.

Groups and events manager at the Resort at Cypress Hills Kim Zeman says the bride and groom were incredibly understanding during the power outage.

“They were absolute troopers,” she said. “They were brilliant and their guests were as well. There were no complaints and they understood it was out of our control.”

The staff really stepped up and delivered the best wedding they could to the Martins, Zeman added.

“Everyone pulled together fantastically and the staff was awesome,” Zeman said. “We just had to ensure we did what we could to make sure the bride and groom could have the wedding they dreamed of.”

A wedding is always a day to remember, but thanks to that beaver this one definitely will be impossible to forget, the Martins said.

“It was the most amazing, craziest day ever,” Kim Martin said.