Shaunavon’s Garrett “Rusty” Thienes has been inducted into the Canadian Culinary Championships Hall of Fame.
He’d tell you it’s not that big a deal, and that anyone who wins the Gold Medal Plate competition in Regina earns their place. He calls it a regional honour implemented to recognize nationwide winners of qualifying competitions.
But he somewhat glosses over the fact you can’t even reach the Gold Medal Plate event without an invitation, and that it attracts the province’s best-of-the-best every year. And as the 2016 champion, he was brought back to judge in 2017.
Basically speaking, he’s better than he admits.
The 38-year-old has been cooking for 17 years, but honing a love for food since he was quite young.
“I guess I was always interested in food but it’s something that’s maybe a little bit clearer in hindsight than it was then, looking forward.”
After working various jobs out of high school and doing some travelling, Thienes eventually found himself in Calgary. After a short stint realizing he wasn’t interested in a career in construction, he decided to take a shot in a restaurant.
“I’d done it (the restaurant industry) a little bit in Shaunavon here,” he said. “I’d washed dishes at our local Chinese food restaurant, and flipped burgers at the rig booth.”
Thienes’ parents had a love for food of their own, making sure to introduce their son to new flavours and themes, and challenging his palate to expand. He admits he — like most kids — had pedestrian tastes at first, but that soon changed, eventually developing into a passion for great food.
His career began in Calgary on the front-of-house side, doing nearly every job there is from busing to expediting and serving tables. After a couple years learning that side of the business, Thienes realized he belonged in the kitchen where he was already starting to make some great friends.
He took a hiatus from the business for a little while but was living with a friend who happened to be the Sous Chef at downtown Calgary’s Saltlik restaurant. Thienes took a job cooking there at a time where several of his coworkers would go on to big careers as chefs, allowing him to work alongside some top-notch talent.
“I was lucky enough to work with those guys and that just kind of gave me the bug. I think if you talk to any chefs who have done it for a number of years, once it’s in your system it’s something you just can’t get rid of.”
Fast forward 10-plus years however, and Thienes missed home. With lots of friends and family back in southwest Saskatchewan, and enough years dealing with the hustle and bustle of big-city life, Thienes and his wife Kristy made the move back to Shaunavon.
Four years ago last July, the couple opened the Harvest Eatery, where Thienes’ menu has earned notoriety beyond the town’s limits. Having a quiet corner of the province gave them the freedom to build the business they wanted.
In a city like Calgary, you open a restaurant and you instantly become a small fish in a big pond, Thienes says. Being in Shaunavon gives them the polar opposite feeling.
“We really like it here,” he says. “We wanted to do something great — it would be a lie of I said there wasn’t a little bit of ego involved in that I wanted to come home to a place that provided me so much growing up, and I just wanted to come back and give something back.”
What he and Kristy have given the region is a taste of big-city eating in a small-town setting, chock full of cuisine inspired by Saskatchewan itself. With an acute understanding of the people, their way of life and the surroundings in which they live, Thienes knows how and when to introduce certain menu items, taking time to ease into things much the way his family did with him. And patrons have responded with nothing but positivity.
With items like bison tartar, steelhead trout from Lake Diefenbaker, duck breast and a wild boar ravioli, the flavours of Saskatchewan pour off the menu. It’s the kind of food that gets a chef noticed with things like an invitation to compete at the Gold Medal Plate, something he’d be eligible for once again next year.
Whenever he discusses the idea of competing, he mentions how much “we” would be excited to go. He doesn’t talk long about himself without mentioning those who help with his success — those he calls his “amazing team.”
From wife Kristy, who handles operations, to Sous Chef Chriel Pangilinan and FOH manager Sara Stocks, Thienes raves about the people he says he is lucky enough to work with. With the restaurant growing and continuing to build a strong name for itself, the team can focus on sharpening skills for another shot at competition glory.
“We’re hoping for an opportunity to go back to Gold Medal Plates in Regina next year, and then hopefully bring a medal from nationals home to Saskatchewan.” 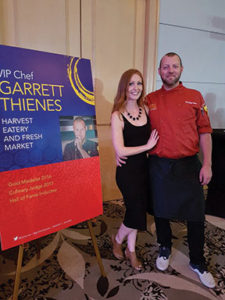