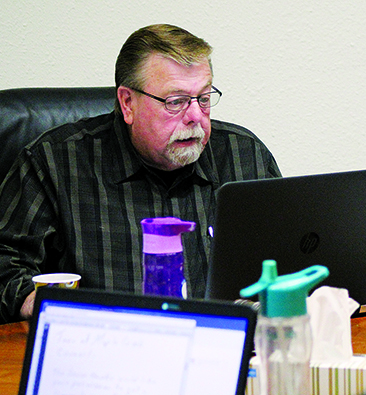 Councillor Michelle McKenzie will assume role until by-election is held

Walking into the council chamber, the chair reserved for the Town’s mayor was not occupied by Barry Rudd, but rather Councillor Cara Teichroeb.

The question as to why this was the case was quickly answered when acting town administrator, Diane Moss shared with council the correspondence she had received since council last met. One of these pieces of communication was a short letter from Rudd, resigning as mayor of Maple Creek. The resignation took effect on May. 15 at 1 p.m. Moss read the letter out loud to council. It did not give a reason for the departure.

Council moved onto other business but eventually came back to the resignation. It was agreed upon that the town would be holding a by-election on Sept. 12 to fill out the rest of the former mayor’s term, which goes until 2020. Until the by-election is held, Councillor Michelle McKenzie will have the title of acting mayor.

Town council did address a variety of other issues on Tuesday night. One of these involved how Maple Creek plans to deal with cases where people are moving houses which are already built into town and placing them on a lot. The issue was brought to council as it was not covered in any of the bylaws which are already on the books.

In the past Councillor Ellaine Hawrylak explained members of council would go and inspect and then make recommendations on what changes needed to be made to the house. In the past, these changes varied and involved many areas. Teichroeb felt the council should be going in a different direction going forward regarding inspections.

“I think we want a professional,” she said.

McKenzie felt it was important the town have regulations in place to make sure not just anything is brought in to the town’s boundaries.

“We don’t allow trailers,” she said.

Another issue which the council touched on when talking about the issue was making sure the houses which could potentially be brought in matched with the neighbourhood they are being brought into. This elicited some concern from Morrow, who worried about a possible situation where the town would have entire neighbourhoods which all looked the same.

Rittinger stressed the importance of the issue, as there are a number of communities in the southwest which offer low priced lots in the hopes of attracting people to their area.

“It’s something we need to look at,” he said.

Eventually, Councillor Barry Elderkin suggested that the matter be sent to a town committee, where it could be studied further. Council decided the best committee to send it to would be the General Government Committee.

The rest of council members agreed this would be the best move. Council touched on another interesting issue Tuesday night. This one pertained to the rules which are used to conduct business. Specifically, the laws which govern how motions are passed and what rules need to be followed before and leading up to a debate of those motions. Generally, many councils have used Robert’s Rules of Order. Councillor Morrow had done some research and suggested that council officially adopt Bourinot’s Rules of Order, which are the same ones used by the federal parliament in Ottawa.

During his research, Morrow discovered the town council had never officially adopted Robert’s Rules of Order, which meant they could adopt the new rules by passing a motion. In pushing for the change Morrow argued he found Robert’s Rules to be somewhat outdated.

“I found it to be old English,” he said.

Rittinger said he had used both sets of rules and was alright with either of the systems being used.

“Bourinot’s rules are clear,” he said.

The discussion eventually ended with the motion to adopt the new rules passing, with Councillor McKenzie the only one to vote against the change, which will officially take effect at the next council meeting.

Councillors as well set a date for the budget meeting. The meeting will take place on May 29. at 6 p.m.