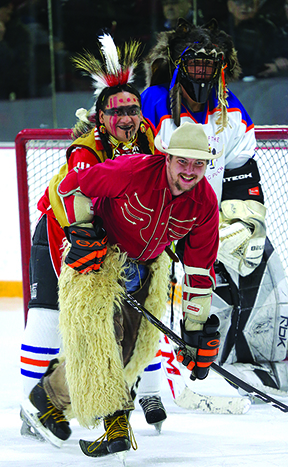 Show Harry Donaldson an eastern brown snake or a tiny, cute-looking blue-ringed octopus, and he will know what to do: leave well alone. Be wary. Be very, very wary.

Show him skates, a hockey stick and puck and he will be out of his element. He is an Australian, after all. And one who only recently moved to Maple Creek.

Terry Filthaut used to skate as a little boy, but that’s the extent of his first-hand experience of the game. He lives in Katy, Texas, and has never been to Maple Creek’s premier cultural spectacle before.

His brother, Blaine, may be a well-known figure in Maple Creek, but is hardly a regular sight at the town’s hockey arena. Like Terry, he only played the game as a child.

To many, Harry, Terry and Blaine are illustrations of the magic and enduring charm of the Battle of the Little Big Puck – a unique Maple Creek experience in which people who are not part of your average Friday night hockey crowd come to watch a game.

Last Saturday, Harry, Terry and Blaine were among hundreds who enjoyed the thrills and spills of Cowboys playing Indians in the 37th edition of the game, but the outcome for them was always secondary to fun and good fellowship.

Their sentiments were echoed by organizers Dale Mosquito, Joe Braniff and Bob Maines, who hailed the evening as a celebration of family, friendships and culture.

“We can be imitated, but never duplicated,” said Mosquito, speaking minutes after coming off the ice at a jam-packed Maple Creek arena.

As he spoke, Maines, came by; the two have been lifelong friends and recall sharing the same bus during their schooldays.

“That’s what makes this day so special, we are friends with all these guys and our families know one another,” said Mosquito. “My Dad knew his Dad.”

“This evening you saw people in the rink who don’t normally come to watch hockey,” said Braniff. “There is nothing like this anywhere.”

As ever, the event was a fundraiser and this year the beneficiary was the Southwest Integrated Health Facility. The final figure won’t be known for a few days, but it will exceed $5,000.

“All the money is staying right here in this community,” said Braniff.

Excitement in the arena had been building from 6pm onwards as people began arriving in anticipation of a 7pm start. While many came for the full spectacle, from opening ceremonies to the final distribution of awards, some only appeared for the third period, when players donned traditional outfits. For most of the time, it was standing room only in the public seating areas.

Before the puck was dropped, tribute was paid to champion rodeo rider Ross Kreutzer, a player in several Battle of the Little Big Puck games. Among his many accomplishments were entering the record books as the 2006 Canadian Champion Saddle Bronc Rider.

“We’re proud of you Ross!” came the message over the PA.

As for the game itself, it was clear from the outset that the Indians faced an uphill battle. During introductions in the middle of the ice, just 12 Indians stood opposite 26 Cowboys. Apparently, several Indian players were at a Pow Wow in Swift Current.

Nevertheless, it was a surprisingly tight contest for two periods, thanks to frantic, heroic goaltending. The Indians even had the audacity to score first, the only time they would hold a lead. At one point in the second period they threatened an upset, scoring twice to leave the score at 4-3, creating a buzz among the spectators.

“The comeback is on,” said Terry Filthaut, who watched the first period in the beer gardens, before moving with his brother to the seated area on the other side.

Come the third period, players from both teams changed into outfits defining their cultures; the Indians put on deer hide and elaborate headdresses, and painted their faces; the Cowboys wore chaps, flannel shirts and hats. Even the referee, a local RCMP officer, entered the spirit of the occasion, donning a Stetson and swapping his black and white jersey for red serge.

The change in outfits, however, could not change the course of the game. With the Indians visibly tiring, the Cowboys made their greater numbers tell. Several Cowboys were of an age when they probably felt they could skate for ever, dashing around with youthful exuberance.

When the time came to scatter dozens of pucks across the rink, as is tradition, the scoreboard read 15-6; it wasn’t a true reflection of a contest that proved remarkably competitive until the last period.

“What an awesome game,” said Mosquito, his face streaked with red paint.

It had been touch and go whether Mosquito would even take part in the game.

“I had ruptured my Achilles tendon and needed my wife’s permission to play,” he smiled.

Happily, he didn’t appear to suffer ill effects and he got to play with his son, Brett Stanley. On top of that his granddaughter watched him from the stands and he provided an assist for one of the goals.

“One of the joys of the event is coming out here with family and friends,” he said.

This year, Mosquito said, the Indian team had been a little threadbare because of a clashing Pow Wow in Swift Current.

“That happens. Sometimes the Cowboys are missing players, sometimes it’s us. It kind of flip-flops.”

Braniff is looking ahead to next year’s game with trepidation. He believes the Indians will seeking payback.

“When I saw so few of them out on the ice I thought it was a trick,” he laughed. “I thought they would suddenly appear all at once.”

As for his own performance, Braniff rated it “not bad.”

“I scored a couple of goals and provided an assist, so I can’t complain,” he said.

As well as hockey, Braniff has made a name for himself on the rodeo circuit: he won the Canadian Professional Rodeo Associations’ Announcer of the Year award from 2001 through 2007.

Among the keenest spectators on Saturday was Nekaneet Chief Alvin Francis, who came to the game with his three-year-old grandchild, Jace.

“Normally I would be playing, but I’m on grandparent duties today,” he said.

Francis noted that it is 40 years since the game was born from barroom banter between two cowboys and two Nekaneet. They argued about who was the better at hockey and decided to settle the matter though a game. The two Nekaneet were Alvin’s dad and his uncle, Raymond Anderson.

Except for a brief hiatus, the game has been played every year. The one stipulation is that participants are members of the Nekaneet or affiliated to a rodeo association.

Roderick Buffalocalf and Clement Oakes were also in Saturday’s crowd. They have been attending the gala event of the year for as long as they can remember. To them it is all about having fun.

“It brings the community together,” said Buffalocalf.

So has Harry been persuaded to strap on stakes and pick up a stick?

“I’m not sure,” he laughed. “It looks like it could be painful if you fall over.”

His wife, Terri, however, has no such reservations. She has already hatched a plan.

“I want to get him to put on skates and then I’ll push him out on the ice,” she laughed. “I think it would be something to see an Australian out on the ice. It would be funny.”