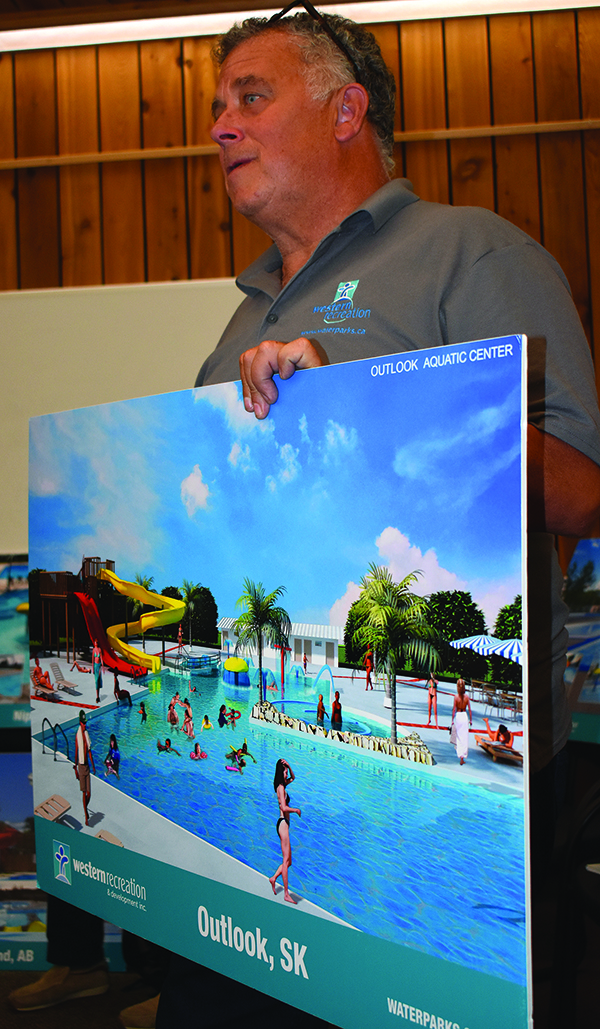 A company that designs and builds aquatic facilities in small communities hailed the benefits of its patented pool system to Maple Creek Town Council on Tuesday, July 23.

It lays claim to developing the most revolutionary and durable pool today.

His colleague, Jeff McCarron, responsible for project development, held up drawings of pool projects in communities such as Outlook and Raymore, where a facility was built for about $1 million. It is thought Maple Creek could model its pool on those built in places with similar population sizes.

Heading the delegation to Council was Kristy McKinnon, founder of the new Maple Creek Swimming Pool Committee, a fundraising group that has set a target of $1.8 million within the next five years.

Her hope is for the Town Council to approve the initiative so the committee can get ahead with developing its structure, applying for fundraising and planning events.

McKinnon told Council that the embryonic committee so far had seven members and “two maybes.”

The plan was for the non-profit group to operate closely with the Town, which would issue tax receipts. The delegation to Council comes amid concern over the existing pool, which has been closed for the season as investigations continue into multiple leaks.

In a message on its website, the Town said: “Due to unforeseen circumstances the pool will not open this season. The pump needs to operate 24 hours for turnovers, flow rates, and balancing chemicals to meet health codes. At this time, due to multiple leaks, the pump cannot maintain operation for a 24-hour period.”

Dyregrov began with an overview of Western Recreation, saying it had offices in Raymore and Lethbridge and specialized in designing and building indoor and outdoor pools; its client base was communities with populations of 5,000 or under.

“We have built 300 community pools throughout Canada, from Nova Scotia to British Columbia over the past 30 years, 40 of which are in the province of Saskatchewan, going back to 1989,” he said. “… we are very active in Saskatchewan.”
Dyregrov said accessibility to piping was one of the design benefits offered by Western Recreation, which made it distinct from other companies. This was a safeguard against the types of leaks that Maple Creek had suffered this season, with the loss of 8,000 gallons of water per day.

PVC membrane – with a life expectancy of 25 years – was another important feature, said Dyregrov.

“Our pricing is very competitive when compared to traditional concrete pool construction.”

Dyregrov and McCarron handed out packages to Councillors; these provided details of the company’s pre-engineered, modular “Patented Ecco Pool System”, including:

•The system has a 50-year life expectancy and is created to withstand adverse weather and ground conditions;

•The PVC membranes are flexible, hardwearing and watertight. The pool membrane inhibits the growth of fungus, algae and bacteria and dirt cannot penetrate its surface; and

•There is easy access to plumbing, skimmers and gutter systems, ensuring low maintenance costs and the flexibility to add features at a later date.

The company says that it is first to bring FPO – flexible polyolefin – construction to the marketplace.

Also in the package was an illustrated list of completed projects, a cost comparison for indoor and outdoor swimming pools, and a proposed layout of a Maple Creek pool, complete with water slide, junior Olympic pool, leisure pool and tot pool.

Dyregrov said the demolition of the existing pool would be a four-day project. In another community, demolition had cost $70,000.

“I don’t know if you have pre-concrete disposal here or what you do here with the concrete,” he said.

“A lot of these corporate sponsorships come after the project has started … they want jump on the bandwagon, they want their name on the slide.”

Michelle McKenzie, the Mayor, said the Town was operating with a very tight budget.

“We are interested in building a new pool,” she said. “But if this was put on hold for a year, would you still be interested?”

McKinnon was then questioned about the new fundraising committee.

She said she had received a lot of good advice about donor recognition. One idea was for a donors wall, listing names of those who had contributed to the pool.

There were also plans to attract sponsors for various pool features, such as lanes or changing rooms.

McKinnon said it was important to start fundraising as soon as possible to prevent money being lost to inflation.

Councillor Barry Elderkin wondered whether the committee needed a budget.

McKinnon said the committee had $3,000 from one of the Zack Smith Charity Golf Tournaments.

She added that there were already ideas for events and she was confident the initiative would get a lot of support from the community.

Councillor Elderkin expressed a wish to receive regular reports about the project. He also asked how much the fundraising committee hoped to raise before the project started.

McKinnon said she wanted to raise $500,000 before ground was broken.

Discussion then turned to operating costs. McKenzie said the existing pool operated at a deficit of between $60,000 and $65,000 a year.

“I expect it would be something similar with a new pool,” said Dyregrov, adding that spinoff revenue were likely from such things as visitors going to campgrounds.

The Mayor told McKinnon that Council would give its decision on the fundraising initiative at the next meeting in two weeks.

After the meeting, McKenzie said Town Council had to carry out its “due diligence” before deciding how to proceed.

She said Maple Creek already had two major projects in the pipeline – upgrades to the lagoon and the new Fire Hall.

“We have to think about the taxpayers,” she said.