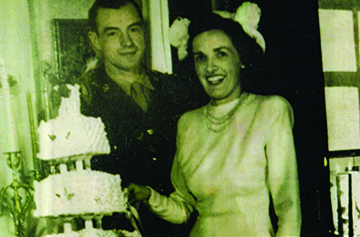 On a gentle summery morning, with a bagpiper playing in the background, a brother and sister laid their parents to rest at Maple Creek cemetery.

It was an unusual ceremony for at least three reasons.

Firstly, the parents had lived most of their lives outside Maple Creek, even though they were married there shortly before Christmas 1947.

Thirdly, two of their children, Ian Campbell and his sister, Christine, had travelled separately more than 3,500 kilometres from their Ontario homes to meet at the cemetery. Ian brought their mother’s urn, Christine their father’s urn.

It was an emotional occasion as they fulfilled their parents’ wishes by burying their remains in a pre-designated spot.

It was also a homecoming for Betty, who had been born in Maple Creek and went to school at the 1910 red brick building at 311 Jasper Street, now the Jasper Cultural & Historical Centre.

It meant a Herringer family member had returned to the soil she had never forgotten. In her will, Betty was clear where she wanted to lie.

She made her final journey from Toronto with Ian and his wife Sandra. The couple drove to Maple Creek from their Stoney Creek home, stopping at many meaningful places en route, beginning with Betty’s home on Baby Point in Toronto. They next stopped at the Lambton Golf Club where Betty had been a member, the French River where she fished, the Big Nickel in Sudbury, the Goose in Wawa, and her sister’s camp outside Thunder Bay, which she often visited.

Meanwhile, Sandy’s urn was transported to Maple Creek by Christine and her husband, Brian, who went by train from Toronto to Saskatoon. Years ago the train would have taken them to Maple Creek, but the town’s railway terminal is no longer there. Betty and Sandy had taken that train many a time to visit home.

Ian said the small ceremony at the cemetery on Wednesday, June 26, with bagpiper Kristi Yarshenko playing, had been like a farewell to his parents.

“It was very emotional,” he said. “Burying your parents makes a big difference to your life. You feel a greater sense of separation from them.

Ian last visited Maple Creek in 1962. Now 68, he was just 11 when he stood on the porch of the Herringer family home in 305 Maple Street.

Inevitably, time had transformed the little community. Occasionally it was hard to reconcile his boyhood memory with what he saw.

Driving into the town on June 25, he noticed immediately that the passenger rail service had disappeared. Gone was the familiar railway station. Other random memories hit him. For instance, he recalled a concrete swimming pool with freezing water. What had happened to it?

He recognized the family home at 305 Maple Street, although the front is partially hidden now by an abundance of foliage – bushes and overhanging branches. Engraved on the ground as you enter the front garden is the name “G.S. Herringer.”

George S. Herringer – that was his maternal grandfather, a leading light in the community who made a substantial contribution to the many organizations and institutions that added to the culture and wellbeing of people in the district. Born in Ontario in 1885, he came to Maple Creek in 1908 with the Merchants Bank of Canada (later merged with the Bank of Montreal) and was appointed manager in 1912. He built the home in Maple Street in 1913 for his bride, Alma Phoebe James. Seven years later he entered into his own business, specializing in insurance and real estate.

Herringer served as president of the hospital, secretary of the school board, secretary treasurer of the Chamber of Commerce, on the board of the Curling Club, Golf Club and Cypress Hills Water Users Association.

When Alma came to Maple Creek in 1913, she quickly became involved in the community – in the hospital auxiliary, live theatre productions, and providing training and instructions in acting and elocution. George died in 1964, Alma in 1971; they were buried in Maple Creek cemetery.

The couple had eight children, including Mary Elisabeth, known as “Betty”, who was born on June 12, 1916. She was educated at the Jasper school.

Last Wednesday, Ian and Sandra visited the Jasper Cultural & Historical Centre and chatted to the board’s Donny White. The centre still has the feel of a school.

“It’s amazing to think of my mother being here,” said Ian. “It was a very convenient location. The building is right across the road from her home in 305 Maple Street. She was in Maple Creek until she was 18.”

Betty went on to attend the University of Toronto and was a graduate of St. Michael’s Hospital School of Nursing and in 1942 joined the Royal Canadian Army Corps in Regina, serving as a Lieutenant (Nursing Sister) with No. 8 Canadian General Hospital in England, France, Belgium and Holland.

“My mother met my father in England during the Second World War,” said Ian.

Betty returned to Canada in July 1945 and was on the staff of the Montreal military Hospital until 1946. She married Captain Alexander (Sandy) Campbell of Montreal on December 10 1947 in Maple Creek. The reception was at 305 Maple Street.

Among her many accomplishments, Betty was president of the Nursing Sisters Association of Canada (Toronto) and was honoured as an official delegate to represent the 4,600 military nurses who served during World War Two at the 50th anniversary to commemorate the liberation of Holland in May 1995. She was also an active social and golfing member of Lambton Golf and Country Club, Toronto, past captain of the the 9 hole Ladies Club, a member of the Baby Point Club, the Royal Canadian Military Institute, Caledon Ski Club and the Fort York Branch of the Royal Canadian Legion.

She may have lived – and died – a long way from Maple Creek, but she never forgot her roots.

Ian was keen to thank Maple Creek residents for showing respect during the drive from Binkley’s Funeral Home to the cemetery.

“Thanks to Norman and Sara at Binkley’s who helped make the arrangements long distance,” he said. “Also thanks to Rev. Carolyn Conarroe (retired) who assisted with the service and to bagpiper Kristi Yarshenko whose music completed the service. Betty and Sandy would have been very proud and most appreciative of their final trip and are now together for ever.”

Ian said his mother had been very specific about where she wanted to be laid to rest.

On the morning of June 26, her wish was granted. A Herringer was back home to stay. And next to her lay Sandy, her husband for 63 years.

*Ian Campbell would be happy to hear from anyone who remembers the Herringer family. He can be contacted at icampbell@thewatersource.ca