Cannabis store could open at end of August 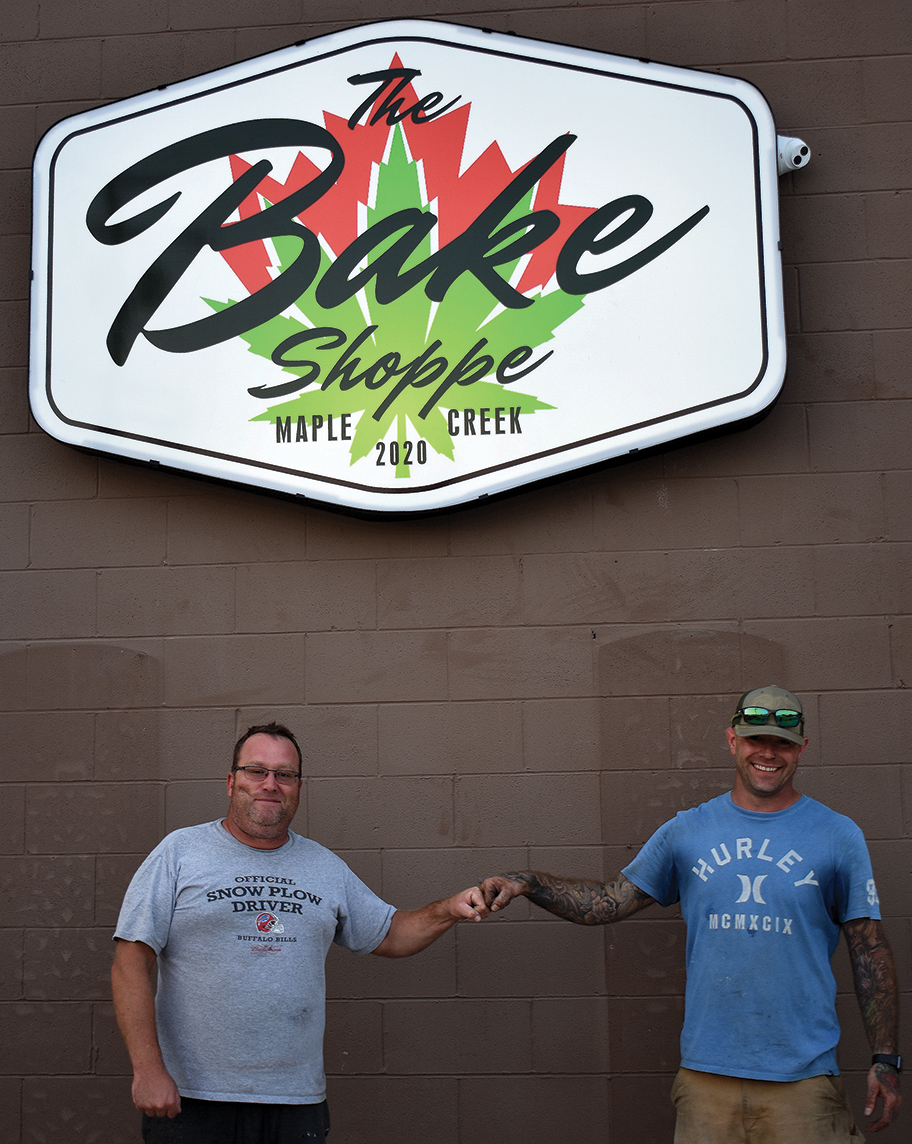 It has been a long hot summer of hard work at 113 Harder Street. If everything goes according to plan, Maple Creek’s first cannabis store could be open by the end of the month.
Last Wednesday saw a significant step towards the finishing line — the installation of an eye-catching electronic sign on the facade announcing, “The Bake Shoppe,” with “Maple Creek 2020” written below.
The black lettering overlies a red maple leaf entwined with a green cannabis leaf against a white background.
Putting up the sign is part of the final preparation work. Jobs remaining include taking delivery of sales counters, selecting applicants for two or three part-time retail positions, and general tidying up.
The biggest challenge will be passing a Saskatchewan Liquor and Gaming Authority (SLGA) inspection. Once the permit is in the owners’ hands, a grand opening will be clearly in sight.
“We hope to get the inspection done next week,” said Jared Daku, last Wednesday. “The SLGA rules are extremely tough.”
Daku has become a familiar figure at the building over the last three months, helping with the “grunt work,” although he won’t be part of the business.

The co-owners of The Bake Shoppe are Jared’s wife Krista Moscato and his mother Mary Daku-Walker.
Moscato, a surface land consultant in Calgary, and Daku-Walker, who lives in Medicine Hat, were the runners-up in a previous attempt to open a pot shop at the old Star cafe and grill on Pacific Avenue.
Design

Last week, Aaron Henson, from Medicine Hat’s Mid-West Pump Ltd., was at the site doing the electronics for the sign, which had been designed by Daku’s cousin, Ian Gardner, from Regina.
“Ian did it on his computer and sent it to us for approval,” said Daku. “We loved it.”
The News-Times was allowed to take a peek inside the building, previously The Shop Bakery & Deli. The centrepiece is the 16-ft by 8-ft “cage” — the secure product storage place. With thick steel doors, it could easily double up as a jail cell. The rest of the floor incorporates a sale area, retail area, kitchenette, and washrooms. Next to the kitchenette is an office containing a surveillance monitor showing nine pictures; each part of the building is filmed.
Having an adequate system of security cameras is a pre-requisite for getting SLGA approval. There must be a professionally-installed and moistened alarm system, with a panic button at the point of sale.
Another regulation is the store must have an HD 24/7 video surveillance system, with a minimum of 60-day backup that records the entrances, exits, staff area, point of sale, receiving area, sales floor, and cannabis storage area.