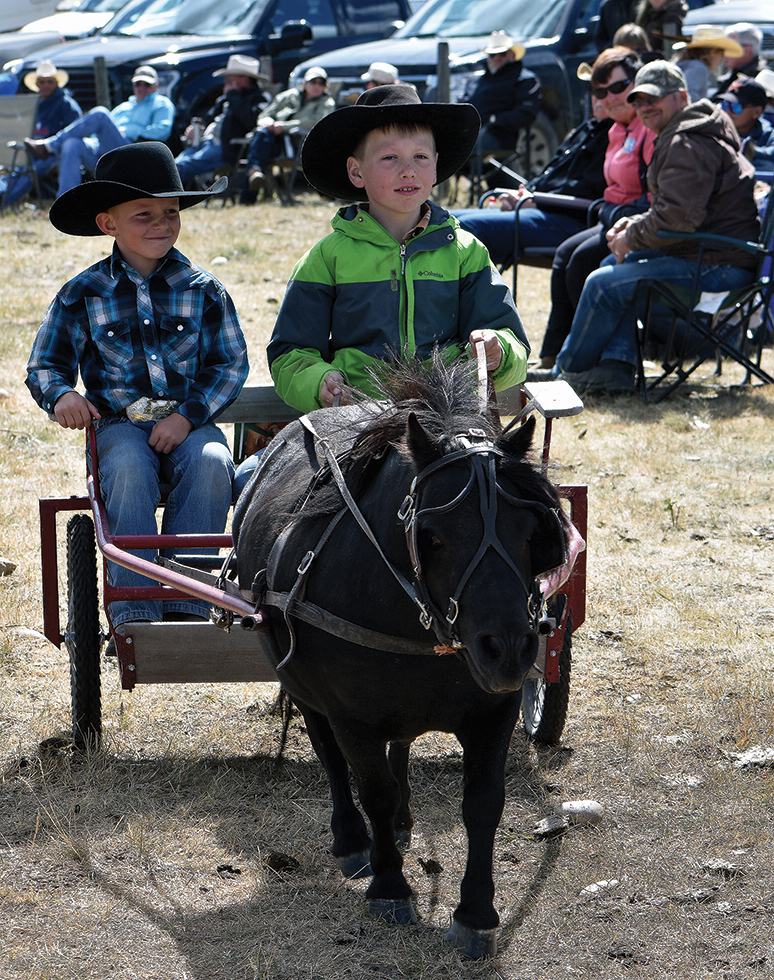 Windblown cowboy hats sailing into the dust almost before the first buck. Ropes blown off course, falling shy of their target. Spectators wrapped in blankets, huddled in canvas shelters, or watching from the comfort of cars, sipping something warm.
This was a Murraydale Stampede and Picnic unlike any other, something perhaps appropriate in a year like no other.
One or two chilly traditionalists in the crowd were even heard to joke, “This isn’t Murraydale.”

Of course, Saskatchewan’s longest continuous running rodeo has historically been held on the second Sunday in July, a time synonymous with dust clouds and sweltering heat in this elevated setting on the Bench.
Sunday, Aug. 30, was always going to be an uncertain proposition. Through the day, eyes scanned the sky, intermittently overcast, for openings for the sun. Whenever it emerged, all was well.
Some things fortunately never change: the natural amphitheatre of the Cypress Hills, 34 kilometres southeast of Maple Creek along the Bryson Trail, looked as resplendent as ever, a fitting stage for the 112th edition of this annual spectacle.
Starved of so much summer entertainment, hundreds of fun-seekers from all over the region filled the grounds; many lined the arena fencing, cellphone cameras at the ready, others like the Wagner family occupied higher ground, against a backdrop of trees. Then there were those encamped on the hill, no doubt enjoying a picnic.
For hard-core Murraydale fans like Aine Perrin, the sight of such a good attendance was heartwarming.
“It’s great to see,” she said.
Aine, a passionate photographer, spent the day by the fence, pushing the lens of her camera through a gap in the metal rungs, capturing events. If you haven’t seen her photos, check out her Facebook page.
There were also several first-timers. One was Terri Mason, Canadian Cowboy Country Magazine editor, who came with her sister. For much of the afternoon, she watched from the back of her vehicle, swathed in a Hudson Bay Company blanket.
The air may have been cool, but the action was red-hot. The Grand Entry provided a stirring curtain-raiser, followed by the singing of “O Canada,” and a moment of silence for those who have passed away in the last year.
Tom Reardon was the man charged with calling the action. A rodeo historian, prodigious storyteller and writer, he seemed a natural for the role, regularly inserting anecdotes and tidbits of information, much of it based on personal experience.
It was a surprise when he told the News-Times this was only his second time in the Murraydale announcer booth.
Over the next six hours, spectators were treated to 16 events: bareback bronc, calf roping, saddle bronc, junior team roping, junior steer riding, team roping, junior steer riding, junior calf scramble, tiny mite barrel race, junior barrel race, open ladies barrel race, junior cow riding, team roping, wild steer race, old timer roping, and bull riding (all the results are printed on this page). The morning had featured “slack” events.
Competitors came from all over Saskatchewan and Alberta, including Eastend, Consul, Cadillac, Shaunavon, Gull Lake, Mortlach, Gouldtown, Piapot, Tompkins, Medicine Hat, Lethbridge, Calgary, Coaldale, Irvine, and Seven Persons. Maple Creek, of course, was well represented.
Among the many highlights was the bull riding, which saw Riley Sibbet emerge triumphant after an 81-point ride.
His nearest challenger was Cody Wilcox, who scored 70 points. Everyone else bit the dust.
“These bulls are very waspish,” remarked Reardon.
Sibbet’s win brought the action to a fitting climax.
Organizers are already looking forward to a 2021 blockbuster ­— hopefully reinstated in its July slot in the calendar.