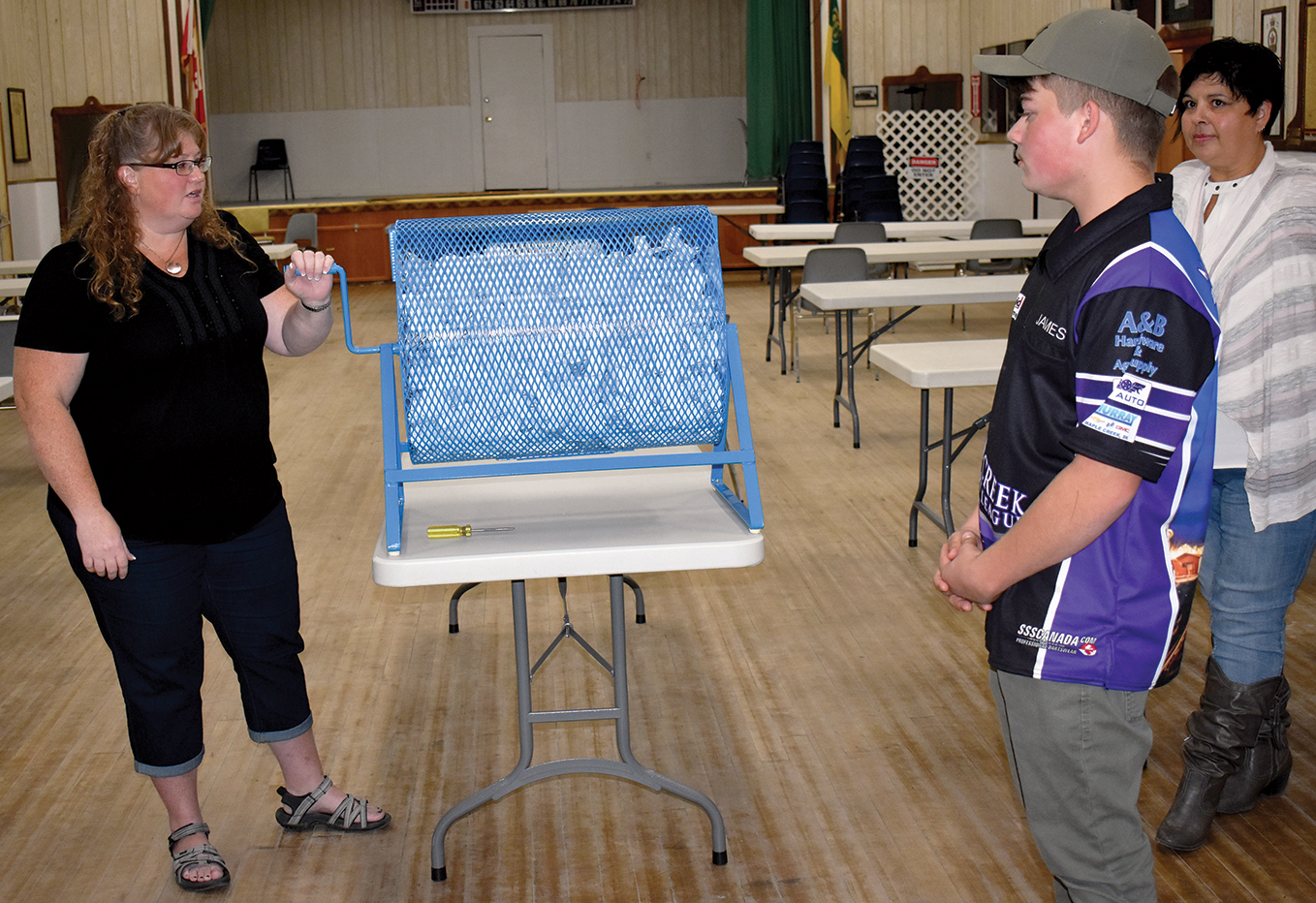 And the $10,000 winner of the 50/50 draw in the pool fundraiser is — Trevor Brost. As Corrie Scott announced the name, applause, cheers, cries, and whoops of delight erupted at the Legion on Thursday evening.
This was the culmination of three weeks of frantic ticket-buying throughout Maple Creek that had seen the estimated prize total rise in leaps and bounds.
By Wednesday, $20,000 had been raised — half for the new swimming pool, half for a lucky somebody. All tickets had been sold.
Tension, excitement and, for many, an irresistible surge of hope, had filled the air from the moment Corrie began rotating the handle of a blue drum, causing 4,000 tickets to spin like baby socks in a tumble dryer.
After nine rotations, first one way, then the other, Corrie opened the flap with the words, “The moment we’ve all been waiting for …”
James Usunier, from the Maple Creek Youth Darts League, which had been practising in an adjoining room, stepped forward to pick out the winning ticket. He handed it to Corrie, who wasted no time in bringing joy to the Brost household.
She phoned the news to Trevor’s mom. Later, it emerged, $500 had been donated back to the pool fund.
For pool fundraisers, the 50/50 draw marked the end of another event that had surpassed expectations.
So far, they have raised at least $150,000 — the bulk of it in the last two-and-a-half months — through an online auction, donations, bottle drive, and now a 50/50 draw. Money has also come from the Trans-Canada pipeline and a rodeo queen.
“The community wants a pool,” said Corrie, a prominent figure in the fundraising campaign. “Last night there were 56 50/50 tickets left and I put out a message on the Swimming Pool Committee Facebook page and within about 20 minutes we had at least 16 messages. I was writing up the 56 tickets madly, going by what time people had asked for them. In the end, I had to turn away five people.”

A live Facebook video of the draw had been planned for 7 p.m. However, an unexpected problem, emerged once the tickets were piled up on a table at the Legion — they tended to stick together.
All hands available were used to separate the tickets and fold each one. Players from the Youth Darts League were drafted in with the instructions, “fold quicker than you’ve ever folded before.”
Finally, shortly after 7.45 p.m., Corrie placed her hand on the drum handle. Ross Pollock stood feet from her, capturing the key moments on his cellphone.
After the excitement had died down, Corrie spoke to the News-Times, giving a shout-out to those who had contributed to the event’s success, including Claire and Ross Pollock; Blythman Agencies (they donated paper, did the printing, took in tickets, handed them out, and kept track of them); and Renee Kohls, who did the “lion’s share” of ticket distribution in the first week.
“Several people, besides Claire and Ross, also went around businesses and put up posters,” said Corrie. “We are very grateful to everyone.”
On Friday, Claire Pollock phoned the News-Times to say Corrie had failed to credit the two people who had made the 50/50 draw possible.
“The whole thing wouldn’t have come together had it not been for Corrie and her husband, John,” said Claire.
She said Corrie had made the template for the tickets, and stapled them together, while John, from Blythman Agencies, had collected them. The couple had also looked after the money raised.
“They deserve accolades,” said Claire.