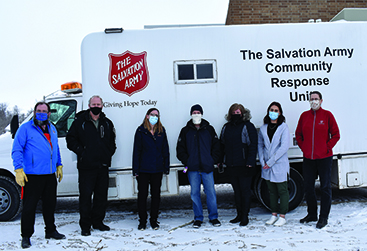 It was a challenging mission: prepare meals for about 230 people and deliver them to Sidney Street School before noon on Friday.
Shortly after 11.30am, The Salvation Army’s food-laden Community Response Unit pulled up outside the school. It was mission accomplished.
A small human chain immediately formed to carry boxes containing the hot meals through the front doors and into the foyer.
For school principal Rob Stewart and The Salvation Army’s Major Ed Dean – both part of that chain – the moment represented the realization of hopes to build a feeling of community amid a global pandemic.
It also represented the success of a partnership between the school and The Salvation Army, helped by major sponsors Agriculture and Agri-Food Canada, which provided nearly $20,000. An additional $4,000 came from last year’s virtual Santa Shuffle.
The big winners, of course, were children … as well as staff, who enjoyed a warm nutritious lunch. On the menu were pasta, tomato sauce, cheese, carrots, celery and an orange. The food reportedly went down very well.
“Happy faces and full tummies!” exclaimed the school’s Facebook page.
Under the hot lunch program, meals will be delivered to Sidney Street School on Fridays until June 25.
Stewart said a lot of work had gone into making the idea a reality. There was plenty of uncertainty, however, in how the details would unfold in practice.
“As of 11.20am today we really didn’t know how this was going to roll out into the school,” he said. “We had all the pieces, but we didn’t know how they would go together.”
Stewart said it was a remarkable achievement to deliver food to children so effectively.
“We went around this morning and talked to all the classes and let them know the team effort that it took for us to do this, the love and time and commitment, as well as the money, to make this happen. We wanted the students to be respectful of how this rolls out and assure them that we will reach out to them to find out what things they like and what they dislike, so we can adjust our menus if necessary. It’s an evolving process.”
Stewart said children’s excitement about getting hot, nutritious meals was palpable – something echoed by Major Ed.
“All days this week I’ve had calls that kids are excited to hear this is going ahead.”
Major Ed spoke of the challenges presented by the program.
Preparations in The Salvation Army kitchen began on Thursday, before restarting in earnest at 7 the next morning.
There was much to do – carrots and celery had to be cut, pasta, tomato sauce and cheese prepared. Oranges counted.
That was just the kitchen work. In the main room outside, an equally frantic packing operation was required. Each meal had to be placed in a brown paper bag, which was put into a much larger, silver insulated bag. Boxes were used to transport the insulated bags to The Salvation Army’s Community Response Unit.
Team members behind the cooking and packing operation were Major Ed, Nicolette Avery-Weitzel, Dale Groves, Nicole Hammerstedt, Phyllis Henderson and another young female volunteer.
“The operation today was a logistical nightmare because pasta is fragile at the best of times,” said Major Ed. “And so yes, it sounded great that we were going to do pasta and cheese, but it worked out that it was pasta and sauce and cheese.”
He added: “We have never done in our kitchen a meal for 220 people. And so to see this whole thing roll out in this way it shows that yes we can do it.”
Stewart explained the thinking behind the program.
He said he had raised it at School Community Council. The idea was to have a common bonding event for all students and staff at Sidney Street School, something especially important during this period of uncertainty and isolation.
The Chinook School Division had given the school the stamp of approval to move forward with the program, while ensuring COVID-19 protocols were followed.
Major Ed said at his end the health inspector had paid a visit last week and “rubber-stamped” the program.
“It will be interesting to hear some of the feedback,” he said. “What we are trying to do as much as possible is to have environmentally friendly containers … the utensils are recyclable … and so it’s a green initiative.”
He added: “It’s a six-week rotation of the menu, and at the end of that six-week we may look at it and say ‘that worked well and that did not work well’, so we will switch it up and try something different.”