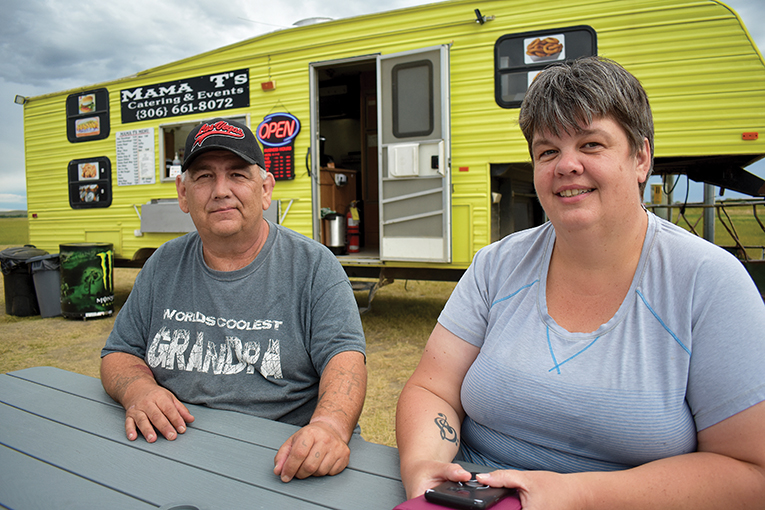 Maple Creek is our home: Pictured are Ken White and his partner, Tonie Shea, who operate in a field off the highway near the new Community Fire Hall, during the warmer months.

Mama T’s owners Ken White and Tonie Shea have called for “fair and reasonable” licensing fees for mobile food vendors in Maple Creek.
“We do not want special treatment, we want fair treatment,” they said in a joint statement to Town Council.
The couple argue that the $3,000-a-year fee listed on the Town’s website is far too high.
They say a previously proposed $1,200-a-year price is also excessive.
“We do not wish to fight with the Town, we wish to cooperate with the Town,” White said at the March 9 Council meeting.

“Maple Creek is our home – my partner and I own property in Maple Creek, we are taxpayers, our children grew up here and have even started their own business. Our hope is not only that Mama T’s will flourish, but our home … our small town of Maple Creek, Saskatchewan will flourish with us.”
White had attended the Council as a delegate. Shea was not present.
Reading from a text, White took Mayor and Council through the recent history of business licensing in Maple Creek.
“We started our food truck and tried to obtain a business licence to work within the town after facing landlord issues at the junction.
“We have inquired several times as to what business licensing would cost and for the most part got the same answer … $411/season. What would not stay very consistent was the fact of where we could operate, or if we could even operate within Maple Creek.
“We then got a very fair offer which led to Mama T’s working primarily in the RM; the RM was the best solution as we could not get specific details as to licensing and operating in town.”
White said Mama T’s allegedly caused a commotion among business owners in town who shared their concerns with Council, other business owners, and the RM.
“We are trying to develop and solidify a small business; we follow all the necessary rules and guidelines set out for us and yet we are targeted. This is when things started to become complicated. The previous Council attempted a bylaw for licensing and operating our business, but we felt our business was being targeted and we believe the Council pushed to pass this bylaw before the election of a new Council. This brings us to our current date.”
White said his business was fast approaching its primary working season, and he was anxious that the past not be repeated.
“We are here to work with the new Council to develop fair and reasonable pricing for Mobile Food Vendors,” he said.
He added that a consultant had compared the prices of food trucks in Medicine Hat, Calgary, and Swift Current. From this it was reasonable to conclude that the price of $3,000-a-year, and even the rescinded $1,200-a-year were “significantly too high”.
“Calgary, Alberta charges $940/year, Medicine Hat, Alberta charges $180.75/year, and Swift Current, Saskatchewan charges $400/year. We want to work with our Town Council so we can move forward together, bring our business into town, and enjoy some events that may come our way.”
White said he and his partner did not want to pay an outrageous amount of money for a licence.
He added that they had been in contact with the Town’s administrative staff, but nobody knew whether the $3,000/year rate will remain or will be reduced.
“We have voiced our concerns as far back as of April of 2020, and still we are unsure of how the matter will progress.”
After the statement, Councillor Al Fournier sought clarification on the $3,000 licensing fee figure.
“$3,000 is what you guys have on your website right now,” said White. “That’s the price for our business and there was a bylaw that was proposed and was rescinded, that would have brought us to $1,200 a year. It was $600 every six months, I believe.
“We’ve been through every one of the licences and we are the highest one out of anybody. For what reason? I have no idea.”
White said Mama T’s wished to get the licensing issue resolved as soon as possible as the season was starting shortly.
Michelle McKenzie, the Mayor, however, said the revamped business bylaw would not be completed by the time the season starts.
It was important, she added, that the bylaw be fair to everyone.
She said the matter would be revisited at the next meeting on March 23.