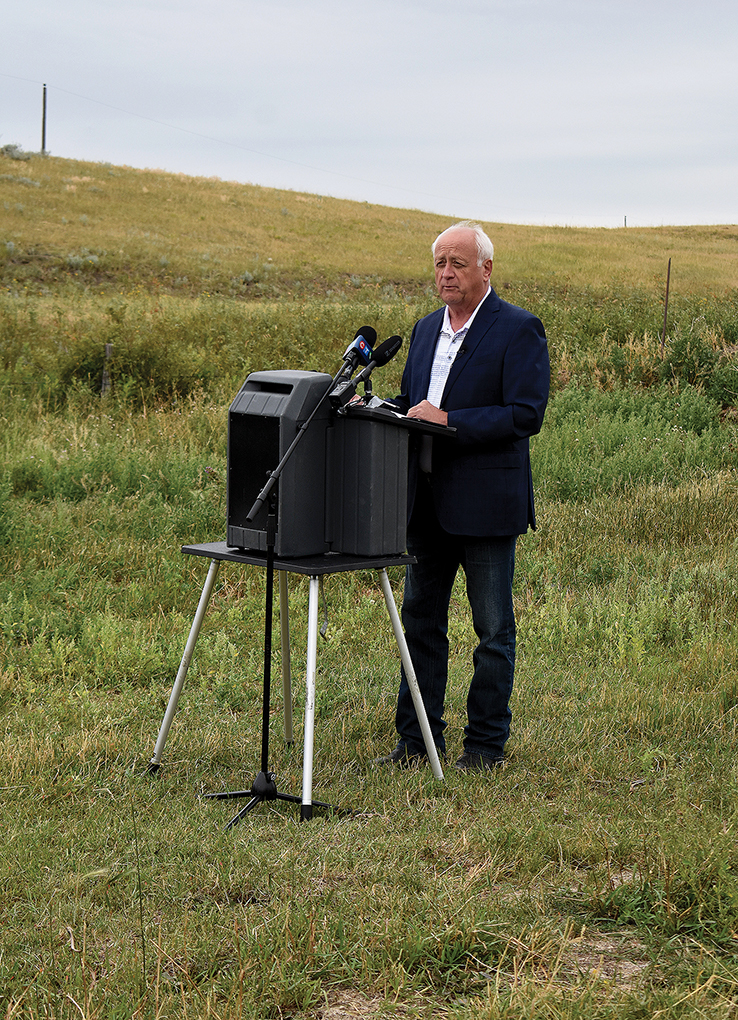 Promise of payment: David Marit, Minister of Agriculture, visited a ranch near Maple Creek on Tuesday.

Local ranchers have welcomed Saskatchewan Government’s pledge of $119 million to support livestock producers facing disastrous drought conditions.
They hope the federal government will now contribute an additional $178 million; the combined total of $297 million would give provincial cattle producers $200 per head to maintain breeding stock.
Elden Jamieson, reeve of the RM of Maple Creek, saw the funding as a step in the right direction.
Eric Lawrence, who ranches near Maple Creek agreed, saying: “It’s going to help. Would we like more? Yes, of course.”
On Tuesday afternoon, agriculture minister David Marit visited Jamieson’s ranch 18 kilometres south of Maple Creek to announce an AgriRecovery program.
“This includes $119 million in direct support for drought-affected producers in the form of a per head payment to help maintain breeding stock,” he said.
“This payment will provide cash flow to help offset the extraordinary costs producers face this year to access feed and water.
“We know the impacts of drought are felt province-wide, but each individual producer has different needs.”
Marit said direct support would allow producers to make decisions best suited to their operation.
“The intent of this program is to minimize herd reduction and dispersals, which would have lasting impacts on the Saskatchewan livestock industry.”
AgriRecovery is part of the Canadian Agricultural Partnership agreement, with funding shared on a 60-40 federal-provincial basis.
Marit said the federal government had been asked to come up with an additional $178 million, which would provide producers with a total program of $297 million.
“Last week, the federal government committed $100 million in AgriRecovery support for the affected provinces,” he said.
“It is essential that the federal government support the Saskatchewan livestock industry by being a full participant in this program.”
Tuesday’s announcement in a rural setting off Highway 21 was attended by Doug Steele, MLA for Cypress Hills, and ranchers and cattlemen association representatives. The group included, among others: Randy Stokke, a board member with the Saskatchewan Cattlemen’s Association; Reg Schellenberg, vice-president of the Canadian Cattlemen’s Association; Jamieson; Shawn Kramer, deputy reeve of the RM of Maple Creek; Lawrence; and John Wagner, reeve of RM of Piapot.
Marit said agriculture was a vital part of Saskatchewan’s rural communities and the provincial economy,
“We depend on Saskatchewan farmers and ranchers to sustainably produce the high quality food that we rely on.
“Saskatchewan’s agriculture sector also plays a major role in our Growth Plan goals for the next decade.
“This is a resilient industry full of hard-working people. It is an industry that has persevered through challenges and come out stronger, time and time again.
“However, as those of you here today are well aware, the prolonged drought conditions this summer are taking a serious toll.
“The challenges are mounting, with pastures and crops in many areas severely affected by drought.”
Marit said that across the province many dugouts are dry or have poor water quality owing to the lack of rainfall and hot, dry conditions throughout the summer.
“This situation is taking its toll on individuals, families, businesses and communities.
“Livestock producers are facing tough decisions due to the challenges this growing season.
“That is why we are taking swift action with the announcement of an AgriRecovery program today.”
Marit added: “We look forward to working closely with the federal government and our provincial counterparts to ensure that our producers receive the level of support they require.
“With full federal participation, the per head payment to Saskatchewan cattle producers to maintain breeding stock would be $200 per head.”
Marit said there would be an initial installment of $100 per head as soon as funds can be issued. Pending federal review of the proposal, a second $100 installment would be issued later, based on the number of breeding animals still on-farm at the end of the calendar year.
In addition to cattle producers, funding will be available on a sliding scale to producers of other ruminant animals to help maintain breeding stock.
The Saskatchewan Crop Insurance Corporation (SCIC) will deliver the AgriRecovery program to the Saskatchewan producers.
“We will share additional information on how producers can apply as soon as the details are finalized,” said Marit.
“In addition to the AgriRecovery response, we have taken a number of other concrete steps to support the livestock producers.”
These steps, said Marit, included:
• The maximum rebate for livestock producers under the Farm and Ranch Water Infrastructure Program for dugouts, wells and pipelines for agricultural use is temporarily increased from $50,000 to $150,000;
• Earlier this year, the federal and provincial agriculture ministers made changes to AgriStability to eliminate the Reference Margin Limit;
• The 2021 AgriStability interim benefit payment percentage was increased from 50 per cent to 75 per cent; just a week ago and
• An increase to the Low Yield Appraisal values under the Crop Insurance Program to divert low-yielding crops to feed use.
“Additionally, we welcome the federal government designation of the Livestock Tax Deferral areas for producers who may still need to liquidate part of their herd due to feed or water shortages,” said Marit. “Across the province, there is a need for feed and straw this winter.
“Producers who do have feed are encouraged to work with livestock producers who are in need.”
Marit also recommended that producers consider contacting the extension specialists at any of his ministry’s 10 regional officers across Saskatchewan.
“Above all, I would ask producers to please remember your mental health is important. The Farm Stress Line is a confidential service, available 24-7, and is totally confidential.”
Marit promised the government would continue to work with producers during the navigation of a challenging year. 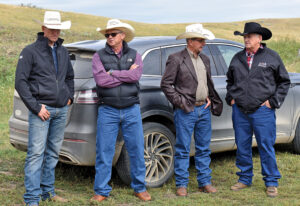