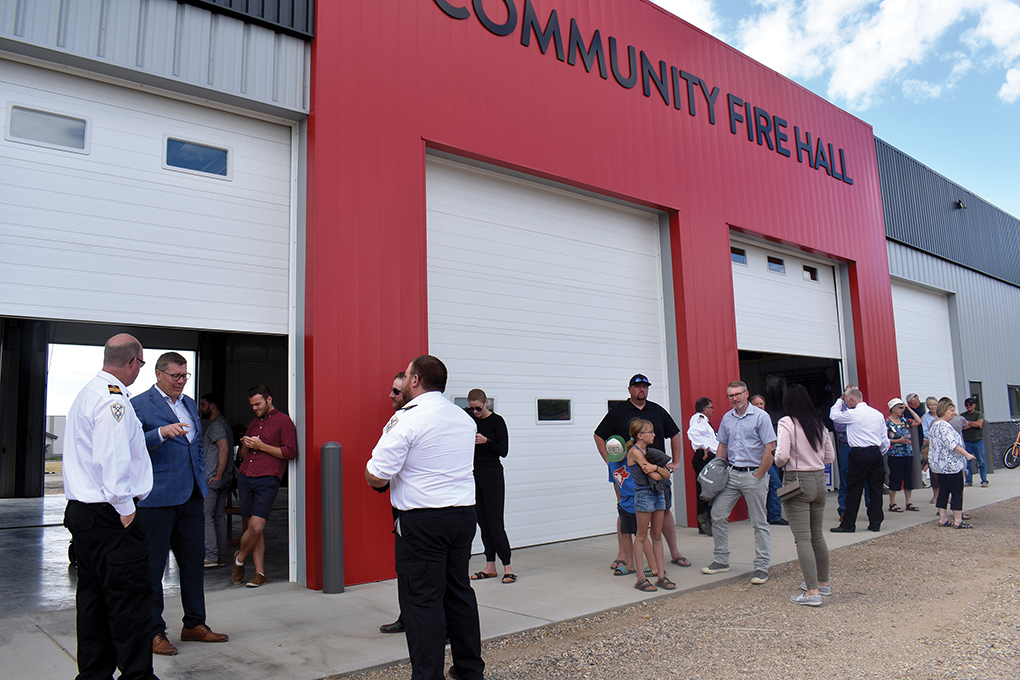 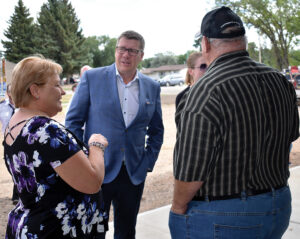 Premier Scott Moe chats with guests outside the fire hall.

From dealing with Trans-Canada Highway rollovers and property fires, to tackling a global pandemic, first responders and emergency workers are heroes who put others before themselves, Saskatchewan’s Premier Scott Moe told a big crowd in Maple Creek last week.
They are folk with tremendously big hearts, he said. Some are your neighbours, who display enormous courage, at times unbelievable courage.
“We owe so much to these first responders. At times I think it is easy for us to lose sight of what they do, and lose sight of the important role they play in our community. We all lead busy lives, I know we really  don’t think too much about the fact that we might need these folks at some point in time, until that point in time actually arrives. And then I can say that we think about it a whole lot.”
Moe said there could be a rare silver lining to the COVID-19 pandemic.
“It might be we have a much deeper appreciation for our emergency responders, our healthcare workers, and for those who keep us safe in our community.”
The Premier’s salute to emergency workers – including Maple Creek’s team of 18 volunteer firefighters – came during Thursday’s grand opening of the Community Fire Hall.
Around 150 people attended the event, which began with a fundraising barbecue by Cypress Credit Union and displays of emergency services.
There were two fire trucks outside the front of the hall – one a 1942 Ford, taken out of service in about 1990 and now stored in the C.M. Glascock Building, the other a 1968 vehicle, which was operational until a few years ago.
To the left of the hall more modern fire vehicles, including the ladder truck, the Salvation Army’s Community Response Unit, a police car operated by Constable Adam Euloth, and he Saskatchewan Public Safety Agency Command unit.
Inside the hall were side-by-side booths: one sold 50/50 tickets to raise funds for a new Maple Creek swimming pool, the other was manned by Professor Nick Jones, a criminologist from the University of Regina heightening awareness about mental health issues related to Canadian public safety personnel, and the importance of improving lifetime wellness.
At 2pm, people gathered in the hall for speeches by eight dignitaries: Moe; Don McMorris, Minister of Government Relations; Doug Steele, MLA for Cypress Hills; Jeremy Patzer, MP for Cypress Hills-Grasslands; Marlo Pritchard, President and Fire Commissioner, Saskatchewan Public Safety Agency; Chief Alvin Francis, Nekaneet First Nation; Michelle McKenzie, Mayor of Maple Creek; and Elden Jamieson, reeve of the RM of Maple Creek. MC was Shawn Kramer, chairperson of the Maple Creek Community Fire Departrment and deputy reeve of the RM of Maple Creek.
Among the audience were firefighters from Maple Creek and other areas, such as Frontier and Cypress County, police officers, public service officers, health care workers, paramedics and EMTs (emergency medical technicians).
Premier Moe was making his second visit to Maple Creek within a year after coming last September for the announcement of Municipal Economic Enhancement Program (MEEP) funding for the fire hall.
“Personally, it is great to be back in Maple Creek for what is a very special occasion in the grand opening of this very important and useful building, your brand new fire hall for Maple Creek and the surrounding area.”